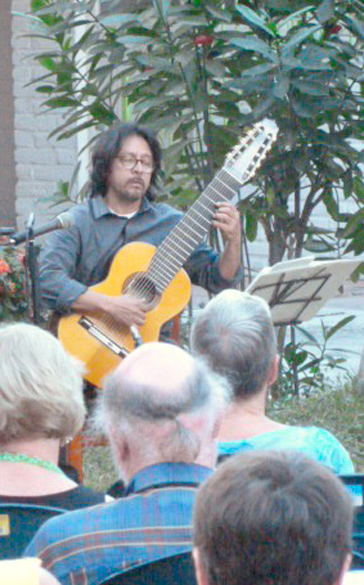 Manos de Amor, the children’s shelter in Bucerias, is preparing to install solar panels on its rooftop. Representatives from eSun Energy (of Bahia de Banderas, Ajijic and Guadalajara) made an inspection of the location on Tuesday.

Jonathan Balas, eSun’s local company representative, said he hoped to start installation of the 14 solar panels later in the week.

The idea for the long-term, money-saving project came about shortly after eSun opened an office near Bucerias and was approached about a community service project by their first local customers.

The shelter could reduce its electric bills by as much as 97 percent once the solar panels are in place. The shelter pays around 5,000 pesos every two months for its power.

Neither eSun Energy nor Manos de Amor would disclose how much the system is costing, but Anne Milling, one of MdA’s volunteers said, “It’s a real good price.”

The annual fundraiser for the Vallarta Yacht Club in Nuevo Vallarta, set for Sunday, February 17, will feature a live and silent auction.

Silent Auction bidding will start at 2 p.m., followed by the live auction.

Many more items are arriving daily that have yet to be cataloged.

There will be a 50-peso entrance fee for hors d’oeuvres.

For more information, contact Rudy or Daniel at 322-297-2222 or see the web-site at www.vallartayachtclub.org.

The hunt is on

This may be a first … a scavenger hunt in Bucerias Centro, sponsored by Amigos de Bucerias, will take place on Saturday, March 9, from 4-7 p.m.

While there will be plenty of easy, flat walking, expect some devious, twisted clues involved, warns Amigos President Ronnie Barker.

Luna Lounge on Avenida Mexico in downtown Bucerias is the starting point at 4 p.m. The final destination is a mystery that each team will have to unravel.

The entry fee is 200 pesos per team of two to four members.

“If you are not going to be here, please pledge your donation,” says Barker.

The Bucerias Children’s Library, also known as Biblioteca Rey Nayar, in conjunction with Amigos de Bucerias, is having a major “fun-raiser” to cover library expenses, on Saturday, March 2, from 2-6 p.m., at the arena Explanada Corona.

The organizers are saying this is going to be a little different than the normal fundraising event.

There are expected to be as many as 40 classic VW Beetles, other specialty cars, Harley Davidson motorcycles, as well as a Proteccion Civil fire truck for the kids to check out and bomberos (firefighters) to talk with.

Old-fashioned games will include egg and spoon races, sack races and musical chairs – not just for the kids but also for adults!

Local small business vendors will be selling reasonably priced food and beverages for kids and adults – and there will plenty of toilets to handle the crowd, the organizers point out.

One of the most popular rock & roll bands in Bucerias, the Gecko Band, will be playing throughout the event, thanks to the generous sponsorship of The Luna Lounge.

There will also be a live art competition for kids to design a mascot for the library.

To get to the Explanada Corona, go inland from Highway 200 on Avenida Estaciones, from the traffic lights at Famar Restaurant, around the curve and cross over the canal on the small bridge to the huge arena opposite Colegio Bucerias.

There is plenty of on-street parking near the event site, as well as low cost “Combi” shuttle service from under the large tree just up from Highway 200 on Estaciones.

Entry to the event is 10 pesos, children are free.

Volunteers are still needed to help with all aspects of the event.  Organizers are also looking for additional sponsors and for raffle prizes.

For more information or to volunteer, contact Ruben at the library by calling 298-3334 or by email: This email address is being protected from spambots. You need JavaScript enabled to view it.

There will be another of the popular used book sales in support of the Bucerias Children’s Library on Wednesday, February 20, from 10 a.m. to 1:30 p.m., under the poolside palapa at Bungalows Arroyos, on Lazaro Cardenas at Agustin Melgar.

If you have books to donate to be sold, contact Barry Munro, 298-2809 in advance of the sale, so there is time to organize and price the books.

A series of free informational presentations on everything from health care to purchasing property is being sponsored by the Amigos de La Cruz.

Next up in the series is a presentation entitled Medical Care In Mexico.

Pamela Thompson-Webb, the owner/operator of Healthcare Resources, will be the presenter at this forum scheduled Tuesday, February 26, 7 p.m. at the Octopus’s Garden Restaurant (Calle Coral 66, La Cruz).

The forum will cover medical topics of interest to everyone living in the area, such as insurance options and logistics, what to expect if you are admitted to a hospital, end-of- life decisions, how physicians manage your care and the four most important things (health-wise) to do if you are here full time/part-time.

The fundraising benefit at Philo’s Bar and restaurant, in La Cruz, is set to take place on Wednesday, February 27, starting at 7 p.m. and will feature all-you-can-eat BBQ ribs, music and raffles.

The price of the entry ticket is 200 pesos and can be purchased at Philo’s, through any Amigo or by sending an email request to This email address is being protected from spambots. You need JavaScript enabled to view it..

Be warned that these events always sell out early so you should buy your tickets as soon as possible.