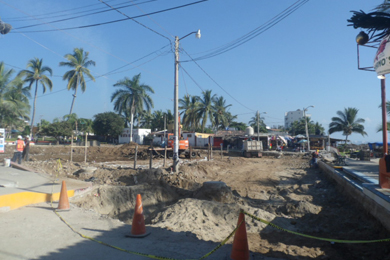 Charlie’s Place: Christmas Eve three-course dinner for 350 pesos, call 322-158-0170 or email This email address is being protected from spambots. You need JavaScript enabled to view it. with “Christmas Eve dinner” in the subject line for reservations.

Encore Restaurant: Christmas Eve and Christmas Day four-course dinners for either 380 and 480 pesos (kids 200 pesos), call 329-298-0140 or email This email address is being protected from spambots. You need JavaScript enabled to view it.. Armi Grano will be singing popular Christmas songs with the Viva Jazz Trio on both days.

Bistro Limon: New Year’s Eve five-course dinner for 50 dollars (or peso equivalent), call 329-298-0464 and ask for Bruce. or email This email address is being protected from spambots. You need JavaScript enabled to view it.. Reservations an absolute must.

JD Tours hosts a New Year’s Eve “Party on the Bay” with a live band, open bar, appetizers, door prizes, dancing and a grand prize for a free dolphin experience. Cost: 600 pesos per ticket, available from Jordan or Xavi at (cell) 322-205-0556 or 322-109-1658, email This email address is being protected from spambots. You need JavaScript enabled to view it.. 100 pesos from each ticket sale will be donated to the John Ozzello Memorial Food Bank.

Los Arroyos Verdes: New Year’s Eve party from 8 p.m. to 2  a.m. with food, music and a Los Arroyos Verdes fireworks show. Adults 90 dollars, children 40 dollars, call  329-298-6312 or email This email address is being protected from spambots. You need JavaScript enabled to view it..

Breakers Beach Bar and Restaurant: Christmas Eve and New Year’s Eve festivities planned, email Colin at This email address is being protected from spambots. You need JavaScript enabled to view it. for tickets and more information.

This list does not include all the offerings, so be sure to call your favorite restaurant to see what they might have. Happy holidays!

Since 1994, Arlene and Ron Tackett have been organizing what has become known as the Bucerias Christmas for Children.

“The first year we were here we felt homesick so we decided to decorate our friend’s open top Jeep with Christmas lights and play Christmas music as we drove around parts of Bucerias,” says Arlene. The couple took a small generator with them to provide the power.

She continues: “We had made friends with Alex, a beach vendor, who suggested that they go up into one of the colonias where there were likely to be many poor children who were not going to have much of a merry Christmas.

“We bought a few large bags of candy and on Christmas Eve we went to the poorest area in Bucerias and tossed out candy to the children. It was so much fun that the next year we brought down 50 toys purchased from a dollar store,” recounts Tackett.

That was so popular that the next year Arlene and Ron bought a trailer and went to yard sales and purchased “loads of toys.”

After three or four years with the same routine, the Tacketts realized  it was becoming more and more dangerous to drive up and down the roads. With kids so excited to see them, they feared they could run over one of them.

Alex arranged for the Tackett’s charity project to give out toys and bags of candy at the small church located on the arroyo.

Since the project’s start, the number of children involved has increased tremendously. “We now give toys and candy to around 1,200 kids,” Tackett boasts.

They also give out bags filled with soaps, shampoos and body lotions to all the mothers and grandmothers who accompany the children. In 2012, they gave out 225 of these bags.

The whole process begins when the Tacketts host a yearly fundraiser in early December to generate the money to buy toys.

All toys are new and wrapped according to gender and age. They have always welcomed everyone who wants to be in on the fun starting with toy wrapping and candy bagging (which this year was December 14).

The gift distribution takes place on Christmas Eve at 4 p.m.

The big news this year is that after 20 years, Arlene and Ron feel it’s time to pass the torch and let new people with new ideas take over.  They say they are fortunate to have found retirees Jan and Jennie Roden, who moved to Bucerias from northern California in 2012, willing accept this challenge.

Jan is actually originally from Sweden, which everybody knows is much closer to the North Pole.

“It is very appropriate for him to be playing Santa Claus,” says Jennie.

Anyone who wants to help keep the Tacketts’ charity project an ongoing Christmas story, please contact Jan and Jennie at This email address is being protected from spambots. You need JavaScript enabled to view it. or call 322-222-5101.

Bucerias residents Joanne Walsh and Franz Piner, animal lovers and avid supporters of the shelter for many years, handed over the keys to a 2005 Ford Focus station wagon to the shelter’s owner, Janina Erban.

Walsh and Piner purchased the vehicle because they knew that Erban’s current transportation was getting very expensive to maintain and operate. She needed a reliable vehicle to ferry cats to the vet and to carry products to sell at local markets during the tourist season.

Piner said he wanted to find Erban a car that was in excellent running condition and easy on the pocketbook in miles-per-gallon.  Other than having cosmetic hail damage, this car met his criteria.

He purchased the vehicle through an on-line auction and picked it up in Mississippi on their annual drive from Ottawa, Ontario, to Mexico.

Walsh and Piner first became supporters of the shelter after meeting Erban at an area spay/neuter clinic in 2006, one year after moving to Bucerias.

Since then, they have been making generous donations, such as building materials which were salvaged from their home renovation, a hot water tank, medications, items purchased in Canada for the shelter to sell (cat-themed refrigerator magnets), cat food as well as direct cash donations, which help subsidize a part-time worker at the shelter who assists Erban with the current population of 220 felines.

Last year, Walsh and Piner sponsored a Schnitzelfest and bingo fundraiser at their home and raised several thousand pesos which allowed Erban to stock up on cat food and medicine to make it through the slow summer tourist season.

For more information about Paraiso Felino, go to the webpage, www.paraisofelino.com.

The play “Memoirs of a Hollywood Gossip Queen” is coming to Los Arroyos Verde on January 7, benefitting Manos de Amor children’s shelter in Bucerias. The play – a replacement for the annual cocktail party – stars Bucerias resident Christie Ann Beguesse and is directed by David Lloyd Austin.

If you haven’t been to Los Arroyos Verde, it is in a beautiful country setting with not a bad seat in the house theater.

Tickets are limited but depending on how fast they sell out, a second evening performance could be set for January 8.  The tickets are 600 pesos each, including two beverages and light appetizers.

Contact Anne Milling at 329-298-1773 or This email address is being protected from spambots. You need JavaScript enabled to view it..