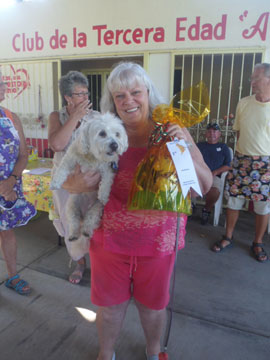 More than 60 people and 30 dogs picniced at the Bucerias Tercera Edad senior center on January 26.  The event was organized by the Animal Spay and Neuter “Team” from Amigos de Bucerias, A.C.

The picnic included best-dressed dog, dog obedience and an owner/pet look-alike contest. Both owners and pets appeared to be having a blast.

Hotdogs, chips and drinks were sold and a raffle was held to raise money.  Water and treats were available for the dogs.

Committee member Peggy Worth gave a short presentation informing the crowd about her experience adopting retired racing greyhounds in the U.S. She urged everyone to consider a breed-related rescue program if they desire a specific breed of dog.

The picnic was held to provide a safe, fun activity for dogs and their owners while also raising money to help fund the program of the Animal Spay and Neuter committee. In addition, the rent paid for the beautiful site provided funds for the senior citizen center.

Julie Lee, one of the event organizers, said, “Since PEACE discontinued their spay and neuter clinics held in Bucerias last year, we decided we needed to do something. We came up with a plan that has a three-part benefit.

“First, there are many dogs and cats running loose in Bucerias that are not sterilized. By bringing in some of these street animals for spay/neuter service, we reduce the number of unwanted off-spring. Secondly, we have many neighbors who just cannot afford the surgery for their pets, but are willing to have it done. Finally, the surgeries are all done by Bucerias vets in their offices, so the money stays in Bucerias.”

Information about the program is given by word of mouth by committee members, other members of Amigos de Bucerias and most importantly, the local vets.

People needing financial assistance to sterilize a pet should contact one of the participating vets, who will assess the circumstances and talk to one of the committee members for approval to pay for the surgery.

Participating vets are Veterinaria Peña’s, Animalitos Veterinaria and PetVet and Care. Contact information for them is on the Amigos de Bucerias website.

The first one, which was held in August last year, raised 4,300 pesos. An entry in the Bucerias recycled-product Christmas tree competition in December earned an additional 1,400 pesos.

Cable said the committee is thinking of ways to raise more money and how to get the program publicized more to pet-owners who need assistance. 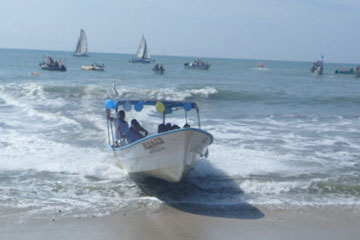 It was recently reported that Bucerias Centro could soon become the home of a permanent, year -round indoor farmer’s market. Little detail has been released to-date about this project.

An unidentified member of a local artisans group has provided a property which could be converted into a building housing up to 30 vendor booths, selling fresh fruit and vegetables, as well as handmade craft items. No date was provided for the opening of this market.

In the meantime, the North Banderas Bay area remains a haven for market shoppers.

Sunday is the day for the popular La Cruz market, now with as many as 200 vendors, located near the La Cruz marina.

Market week wraps up with a small but growing market in Nuevo Vallarta every Saturday Morning from 9 a.m. – 2 p.m. There is usually live music, fresh breads, organic coffee, waffles, crafts and gift items, located in the “old” marina gazebo area between the Oxxo store and Federico’s Estudio Café.

Plans for the 10th annual fundraiser for the Manos de Amor children’s shelter seem like the ones in the past, except for one major difference this year. The popular event, set for Saturday, February 15, will not be held at the Bucerias plaza, as it always has in the past.

Due to construction which began late last year to remodel the amphitheater area and surrounding streets, Rhythm N’ Ribs (RNR) organizers were forced to look for a different location, despite some assurances that the plaza work would be completed in time to hold it there as usual.

Anne Milling, a spokesperson for the organizing group, said people look forward to this fundraiser every year at the plaza, but questions remained about the space being available in time.

The fundraiser is always held in mid-February and has been drawing crowds upwards of 2,000 attendees.

Businesses and individuals line the plaza and the adjoining street with tables from which they offer a variety of food and beverages that they donate in return for tickets purchased from the centrally located Manos de Amor table.

Meanwhile, entertainers perform on the plaza stage to delight the crowd.

After considering their options, which included closing a section of street or changing the date, the RNR organizers found a large flat lot about halfway between Hwy. 200 and the Decameron on the south side of Av. Las Palmas and the owner agreed make it ready for the expected crowd.

In addition to the wide variety of food and entertainment, there will be the usual raffle and silent auction.

Enjoy the performance of Armi Grano & the Viva Jazz Trio at a benefit concert for Families of the Dump. This performance will be at Vallarta Yacht Club on February 3, 2014 at 6 pm. Prices for dinner and show is 350 pesos.

Armi is one of the finest jazz vocalists on the contemporary jazz music scene performing an exciting mix of Latin, Pop, Swing and Jazz. Her influences include Ella Fitzgerald, Sarah Vaughn, Diana Krall and Anita O’Day.

This is a charity benefit open to the general public. Grano will be donating her fee to Families at the Dump.

You can take the designs home with you. The items will be on sale after the show.

February at the BBCC