The annual Fiestas Patronales of Nuestra Señora de la Paz, the church in Bucerias Centro, runs from January 16 through 24. As usual, there will be plenty of games of chance, food and drink booths, musical entertainment and carnival rides – pretty much something for everyone.

The last day of the fiestas features the Blessing of the Boats, which launch in La Cruz and sail across the bay for a dramatic landing on the Bucerias beach, where they are blessed by the local priest.

Usually there are castillos (fireworks towers) in the plaza on the first and last nights of the fiestas.

Many streets in the center are closed or hard to navigate during the fiestas, so it’s best to walk,  taxi or find a remote parking spot.

During the January 8 Bucerias Artwalk, a special event was held in conjunction with the non-profit Human Connections organization, which works with small business owners in Bucerias who are interested in learning new methods intended to help them “grow’ their enterprises.

Human Connections Executive Director Elly Rohrer says MBA students from cooperating universities in the United States fly to the northshore each year to mentor the entrepreneurs on development of a business plan. “They learn how to improve their presentation and selling skills, while offering the college students the opportunity to put their education to practical use.”

During the expo, there was a “competition” between the four business/student teams promoting and selling their products: organi

Three local volunteer judges looked at the presentations and the top two teams that sold the most products during the artwalk were awarded prizes.

For more information about Human Connections, go to http://humanconnections.org

Amigos de La Cruz Players has provided more details about their upcoming community theater production.  The auditions for the murder mystery dinner theater will be held on Monday, January 19 and Tuesday January 20, from 4 to 6 p.m. at Philo’s Restaurant, Calle Delfin 15, in La Cruz.

They are looking for seven actors (no singing), both male and female, all ages 35+, and a piano player.

Also important is the production crew, with less time involvement and no stage work.

Anyone interested in having a part acting in the play, to be performed March 17 and 18, or volunteering for the production crew –props, light, sound, costumes, make-up, promo, ticket sales, program design, front of house – should attend and meet the director and producer.

No preparation is required for the audition, reading material will be provided.

Experience is not necessary, just a desire to help put on this show, whose proceeds benefit  the good works of Amigos De La Cruz.

The time commitment is about three hours per week in February and March and a few hours for the performance nights.

For more information, contact the director, Patricia Spencer, at This email address is being protected from spambots. You need JavaScript enabled to view it. cell 322-190-9369.

On January 10, about 40 volunteers turned out in Bucerias to participate in the first monthly Riviera Nayarit Beach Cleanup Network project of 2015.  The cleanup was held in cooperation with Amigos de Bucerias. 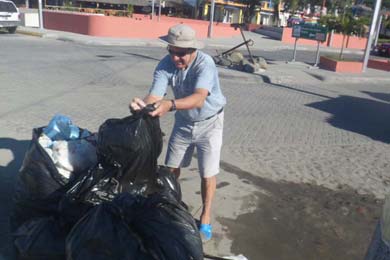 Last year, there were seven Beach Cleanup Network projects; in 2015, the plan to have a beach cleanup scheduled every month.

“These civilian actions have achieved a domino effect that has sparked a multifaceted cultural shift,” says Mariela Dueñas Rossell, program coordinator for the Riviera Nayarit Convention and Visitors Bureau.  “The most visible changes include the increasing number of cleanup volunteers, a change in the mentality and bad habits of the local population, a coming together of citizens and the government, the gratitude of the tourists and the positive environmental benefits obtained.”

Currently, she says, there are 15 registered groups, a number that has seen growth over the past few months.

“This has provoked a social impact that has changed the mentality and the bad beach trash habits of the people who inhabit the coastal communities,” Dueñas says.

Pedro Galaviz, president of the Grupo Grano de Arena, confirmed these statements. His group began cleaning up in La Peñita de Jaltemba, inspiring other volunteers to come together and do their part in Guayabitos, Los Ayala, San Pancho and Bucerias.

“During the holidays, the tourists would see our volunteers cleaning up and they’d thank us, pitch in and put their trash in our bags. From the moment we started the program we’ve seen how beachgoers have stopped throwing trash on the beaches,” Galaviz says.

For information and more details about the beach cleaning network – including the hours and meeting places – or if anyone would like to propose their community join the Riviera Nayarit Beach Cleanup Network, call Dueñas at 322-297-2516, ext. 108.

In three short years, Taste of La Cruz has become a destination event for the Riviera Nayarit, with many visitors planning their vacations to include the annual exhibition.

This unique festival-like expo will be held at the Malecon and Amphitheater of the Marina Riviera Nayarit in La Cruz and features restaurants, businesses, entrepreneurs, artisans and vendors from throughout the region.

There will be live music throughout the afternoon at the amphitheater at the center of the Malecon.

In addition to dozens of local restaurants and businesses offering their food and services for sale and sample, over 80 local artisans and craftspeople will offer unique regional art, crafts, clothing, jewelry and food.

Event organizers are encouraging entrepreneurs, businesses, services and restaurants to sign up for the event as quickly as possible to ensure a space.

The event will also have as a “backdrop” the annual Vallarta Cup Race Series, a nautical series that is ongoing on Saturdays in January. So in addition to the beautiful and exotic atmosphere of the Marina and the Bahia de Banderas and Sierra Madre Mountains, look forward to sailboats on the bay!

The admission of 150 pesos includes a complimentary beverage. Volunteers at the event are still wanted and will receive free admission.

Contact This email address is being protected from spambots. You need JavaScript enabled to view it., call 322-116-4731 and visit http://tasteoflacruz.com/ to view video of past events. 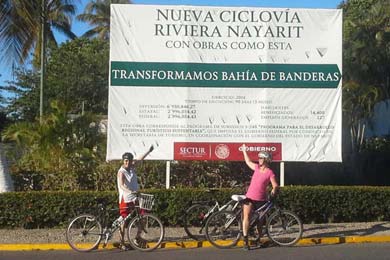 Beth Salvesen (left) and Lisa Elliott, part-time Bucerias residents, stand in front of the sign promoting the recently completed bike path (ciclovia) through the 3 km. of Nuevo Vallarta which connects to another 1.5 km path in the Flamingos development. Plans have been announced to extend the path all of the way to Bucerias centro.