Construction of a new 18-hole golf course in Nuevo Vallarta designed by Greg Norman has been going on for less than six months, but already five holes are completed.

According to developers Vidanta Golf, the first nine holes should be ready for play in May.
The second nine holes are set to be finished by November. The course will be able to accommodate 260 players per day.

According to the local Convention and Visitors Bureau, the new course is in response to increased demand for golfing in the region.

The date for the highly popular fundraiser for the Manos de Amor children’s shelter in Bucerias is rapidly approaching.
This year marks the 11th annual event and is set for Saturday, February, 21, 6-10 p.m. The location will be the same as last year, on Av. Las Palmas, just up the street from the entrance to the Decameron Resort in Bucerias.

As usual, there will be booths hosting area restaurants, drink choices, groups and individuals selling ribs (as well as other foods) to an estimated 5,000 attendees.

The evening event includes a raffle, 50/50 draws and a silent auction – the latter always known for the quality of its items on offer.

Entertainment this year will be provided by the Decameron resort dancers and an Elvis Presley impersonator.

There will also be free health advice, solar energy information, crafts made by kids from the shelter, as well as Manos de Amor T-shirts and information.

The shelter, which currently houses about 30 children, receives no government funding, and relies heavily on this major fundraiser, in addition to a few smaller events and individual donations.

This year’s entertainment will be Philo and the Mexican Shuffle Band and La Cruz Folkloric dance troupe.

Proceeds from ticket sales will be used to support the Senior Center’s annual operating budget.

Tickets can be purchased at Philo’s or from any member of Amigos de La Cruz.

“The weather was excellent. We couldn’t have asked for a better day to go out on the bay,” Sandi Nystrom said.  “In all the years we have been doing this we have never seen anything so spectacular,” she remarked of the whales.

The Nystroms chartered a different boat this season and they have already scheduled it for next year.

“The food was excellent, the service was awesome, and there was so much room on the boat,” Sandi Nystrom said.  “It holds 300 people and we stopped selling tickets at 150. Next year I believe we will sell 180.”

The event raised 68,850 pesos that will provide food for the 295 packages distributed by the Food Bank each month.

Another Food Bank fundraiser is coming soon. “HELP! A Beatles Tribute” is set for Thursday, March 12, 4- 7 p.m. at the Drunken Duck in Bucerias. Tickets cost 200 pesos and are available at Yo Yo Mo’s Pizza and Sports Bar.  Only 150 tickets will be sold.  50/50 and tequila raffle tickets will be sold during the performance.

Email Sandi Nystrom, This email address is being protected from spambots. You need JavaScript enabled to view it., or call 322-103-2828 for tickets and information.

Jim and Marilyn Moxin of Club Tercera Edad in Bucerias are looking to expand their outreach to help more seniors than just club members.

“Our project wish list is for a facility to house 30-plus seniors initially, with on-site, 24/7/365 assistance,” said Marilyn Moxin.

“Through our work with the club we became aware that there are many seniors who require an assisted living/care home,” she continued. “Our doctor told us there were many seniors who, with the onset of dementia coupled with diabetes, needed help. The family support that was always in place in the past is often no longer there.” 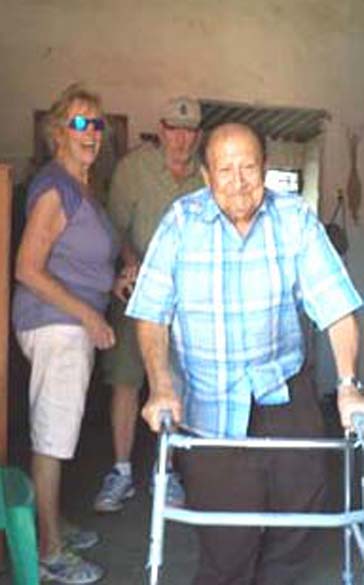 She estimated the building cost alone will run to US$150,000. In addition, hospital beds and other equipment will need to be brought in from a support network in Canada.  “With a generous pledge from an anonymous donor we are currently at about 20 percent of our goal,” she said.

As the project progresses, she said the group plans to expand beyond local fundraising events and seek corporate funding and assistance from service clubs.

The Moxins have commissioned an artist’s concept of the project and are prepared to present it wherever requested.

Although the project took on non-profit (asociación civil) status in May, the Moxins decided not to commence fundraising until late October. They have a board of directors consisting of three Canadians and two Mexicans, as well as a team of volunteers.

Bucerias resident Sandi Keith (Barkwell) recently went through a tough divorce. She planned on having a party with her friends to mark the occasion.
But then Keith heard about Compassion for the Family, an organization that is starting the first shelter for abused women and children in the Puerto Vallarta area. She knew then that she had to do something to help that very worthy cause.

“I had already planned a party, and decided to turn it into a fund raiser,” Keith said. “I talked to Hugh at Luna Lounge and David Zude from Compassion for the Family and we got it organized.”

A hundred tickets were sold for the event which featured appetizers made by Keith and friends, music, dancing, raffles and plenty of fun. Zude gave a short presentation about the shelter, which has just opened.
Keith was thrilled with the turnout and the enthusiastic crowd.

“The numbers are in,” she reported recently. “Between ticket sales, raffles and donations, 43,426 pesos was raised and has been given to David Zude for the Shelter. Thanks to everyone who came out.”

For more information about Compassion for the Family, go to www.compassionforthefamilymx.org. 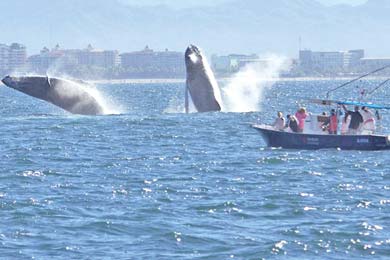 A humpback whale-watching trip to raise money for the Bucerias Food Bank (see page 25) turned into a thrilling nature experience, as these two mammals put on a breathtaking acrobatic show. Congrats to Mandy Freeman for having her camera at the ready and snapping this fine image.