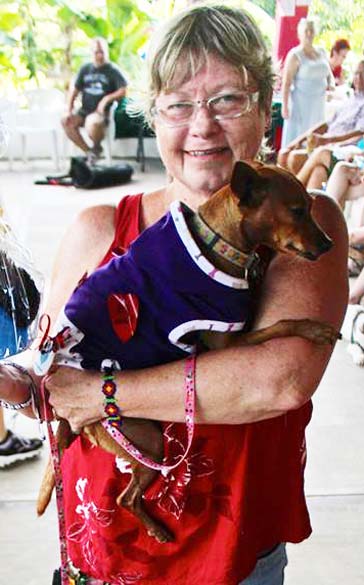 “The Pet Picnic was a big success and a fun day,” said Kim Cable, a Paws and Claws committee member. “We had 60 people and 30 dogs come out.”

The picnic was held at the Bucerias Tercera Edad facility.  Participants could choose among a variety of contests: best dressed pet, owner-dog lookalike, best tricks and overall Sweetheart.  Refreshments were sold and many prizes were raffled off.

“We raised over 12,000 pesos, enough to have helped needy residents pay the vets who have spayed/neutered about 40 pets,” Cable said. “Past events have raised about the same amount and we have probably spayed/neutered 40 pets to-date.” Contact Cable at 298-6394 for more information.

Among the participants in the Walk with Your Pet event was the group’s former president and current Bahia de Banderas Mayor Jose Gomez, who walked his yellow labrador. 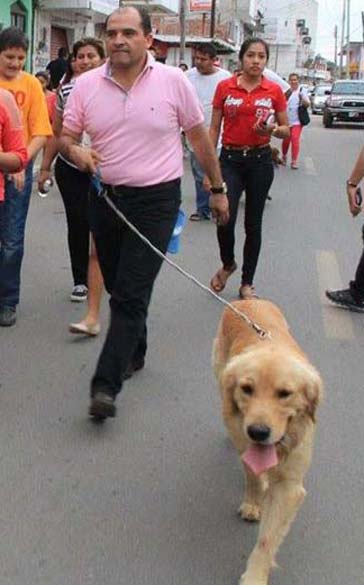 Among the more out-of-the-ordinary pets that came for a walk with their owners were goats and a calf – a reminder of the agricultural roots of the area.

The tournament will include six categories for kids born from 1997 to 2007. The first three categories will be mixed and the other three will be strictly for male players.The first Copa Bahía soccer tournament to take place in Riviera Nayarit  will be held March 11 to 16, on six top-notch playing fields.

The slogan for this first tournament is: “Because soccer is everything.”

Sponsored by the Riviera Nayarit Convention and Visitors Bureau, the Bahia de Banderas municipality and the Nayarit state government, the event is expected to encourage sports, generate an increase in tourism, better position the destination and bring new revenue into the region.

The 1996-97 category will take home a prize of 20,000 pesos for first place and 10,000 pesos for second place, as long as there is a minimum of 14 teams registered. The highest scorer will also receive a separate prize.

The next round of cat and dog spay/neuter clinics in La Cruz is set for next week.  The dates of the clinic are Wednesday to Saturday, March 4 to 7, at 1-E Carretera Punta de Mita, cross street Delfin.

These La Cruz clinics are being supported by the 2nd Annual Funny Bones Spay/Neuter Fundraiser that was a huge success on February 10.  Organizers say the final tally will be close to 88,000 pesos.

According to Dani Summers of Funny Bones, the spay/neuter fundraising group in La Cruz, dogs and cats should not have food or water after 8 p.m. on the night before surgery.  On the day of the clinic, they need to be checked in by 9 a.m. to make sure they have a spot.  After-care instructions will be sent home with the pet about 1 p.m. the same day.

“Families line up for this service and La Cruz is great at providing many volunteers for the check in process and the surgery recovery duties,” Summers says. “These volunteers are very helpful to the families that need help collecting their pet in the afternoon.

She continues: “This is an educational experience for the community as the surgeries can easily be viewed by the public.  Medicine for parasites and skin treatment for fleas and ticks is also a part of this service provided by the non-profit  group PEACE mobile spay/neuter clinic.”

The mobile clinic has a red trailer that says PEACE on the side.  This traveling team is typically made up of two veterinarians and one vet technician.  They have been providing this service to families in need in the Banderas Bay area for about ten years, resulting in dog and cat populations decreasing dramatically.

“The volunteers are especially valuable for high volume operations, which we are hoping for this first round of clinics here in La Cruz,” Summers says.

Check out Peaceanimals.org for more information.

Bucerias Food Bank organizer Sandi Nystrom recently got a raffle donation that should increase interest in the March 12 fundraiser.

A round-trip ticket for two people from Westjet Airlines will be up for auction along with a one-week stay in a two-bedroom condo just one-and-a-half blocks from the beach in Bucerias.

“We are totally blown away by these donations,” Nystrom says.  “Leigh and Robert Peters are so generous to donate the use of their condo, and WestJet … well, just wow!”

Rules for the raffle can be seen at the John Ozzello Memorial Food Bank Facebook page.

Musician duo Kassiano Smith and Julie Murillo are back by popular demand on Wednesday, March 11 at the Vallarta Yacht Club in Nuevo Vallarta.  Both musicians are well known singers, recording artists and entertainers.

Murillo sings pop, reggae, jazz and rock in English, Spanish and Portuguese, and can play classics such as Beethoven’s “Moonlight Sonata” by ear.

Born in Chuihuahua, Murillo is an engineer by profession and graduated from Chihuahua University as well as the Bellas Artes University, where she learned classical piano.

Her piano interpretation and soothing vocal style spans three decades and has taken her on tour throughout Mexico, the United States, St. Kitts and Nevis, St. Thomas and Hawaii.

Cocktails and hors d’oeuvres will be served starting from 6 p.m., with light desserts offered during intermission.  Seating for the show is on the patio, set up theater-style, beginning at 7 p.m.

Tickets must be prepaid. There will be limited seating, so make sure you reserve early. Contact Rudy or Danny at the Yacht Club, 322-297-2222 for reservations.