Paraiso Felino, the no-kill cat shelter in the northshore inland town of San Juan, will again be  one of the 24 Vallarta-area community service organizations to benefit from the annual International Altruism Festival, set for May 17 at the Hotel Marriott, in cooperation with Kelly Trainor, the U.S. consular agent in Puerto Vallarta.

More than 40 different restaurants and businesses provide food and drink samples at the event.  There will also be entertainment, raffles and fireworks.

Attendees also have the opportunity to learn about many non-profit organizations serving the Bay of Banderas area.

For Paraiso Felino, each advance ticket they sell will pay for one bag of Kirkland Brand cat food, allowing the shelter to feed all their cats for one day.

If you can’t make it to the festival, consider getting tickets for a friend or simply donate them and they will be passed on to someone who might not otherwise get to go, suggests Erban.

Advance tickets are the same price as last year: 350 pesos in advance and 450 pesos at the door.

Amigos de La Cruz has hired two full-time employees to clean the highway from Oxxo store to the bridge past the stop light.

The La Cruz Adopt-A- Highway program started in December. It includes picking up and recycling items found on the roadway, trimming, cutting and cleaning the palms, and cleaning the main road and the lateral.

Join in an amazing culinary adventure through the town and backroads of Bucerias, using pedal power alone.

The first hidden gem the group heads to is a new local coffee shop that puts the big guys like Starbucks to shame.  Here you can enjoy a traditional latte, cappuccino, espresso or iced coffee.

Once alert and awake, you then move on to yet another coffee stop.  Here, however, you take some time to view a local coffee roaster’s operation and try a tasty Mexican specialty coffee that is paired with pastries made by a New York pastry chef.

The third stop is an interesting juice bar where you sample several invigorating “agua frescas,”  leaving you properly hydrated for the next part of the ride – the back roads, quiet country paths and the beautiful mountain vistas of the Sierra Madre mountains east of Bucerias.

At the fourth stop, the cyclists will sample the most amazing birria (goat stew) tacos you will ever eat.  The fifth and final stop will be back on the west side of Bucerias, where you can taste what the tour organizers believe are the best shrimp tacos and ceviche in the whole of Bahia de Banderas. Along with lunch, you will sample agua de chaya, as well as have the option to have a nice ice cold beer!

For more information, go to http://bicibucerias.com.

About 400 Bucerias street signs were handed over to a representative of Amigos de Bucerias earlier this month. This will help volunteers from the non-profit group who have been installing new street signs around the town.

The signs had been in storage at the Bucerias Registro Civil office for as long as nine years, according to Town Administrator Tony Veneno.

Many street corners in the town are either lacking street signs or have ones that can’t be read any longer, due to weather-aging.

Amigos de Bucerias President Ronnie Barker says the street signs need to be correlated with the corners that need them.

“From a rough assessment, the majority of the signs seem to be surplus on the inland side of the main highway, due to our recent efforts,” Barker added.  “Other factors, such as incorrect street names, effectively halves the number of useable signs. But we’ll look them all over and put up the ones that are needed.”

New street signs were purchased with money raised from the sales of recycled plastic bottles collected in the Amigos de Bucerias street-side baskets.

The Tribute to the Beatles fundraiser for the Bucerias Food Bank raised 44,500 pesos, according to organizers Randy and Sandi Nystrom. “Thanks so much Yoyo Mo’s owners Glenn and Tanya and the staff at the Drunken Duck,” they said. This was a huge success and they hope to make it an annual event.

The winner of the vacation package – which raised an additional $1600 Canadian – was Chris DiRago from Toronto, Ontario.

The Nystroms hope to make the fundraiser an annual event. 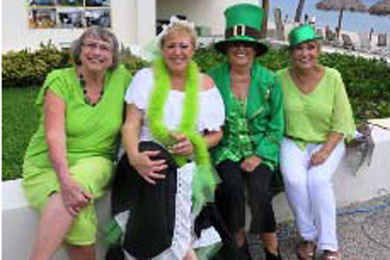 The local chapter of Beta Sigma Phi put lots of thought into surprising the crowd at their annual fashion show held at Karen’s Restaurant on March 17. But Mother Nature had an even bigger surprise in store: a large unseasonable rain storm that pushed the Ameca River beyond its banks, causing one of the bridges across the river to be closed as a preventative measure. This stranded fashion show emcee and chief leprechaun Judi Davis Ryan on the Puerto Vallarta side of the bridge!

“There I was in my car, stuck in the biggest traffic jam you could possibly imagine,” said Ryan. “I had costumes and most importantly the script for the show!”

But the show must go on, and sorority sister Sandi Keith stepped in and presented the show without missing a beat. Ryan finally made it back to Bucerias in time for the finale.

Money raised from the raffle at the fashion show goes to pay for school supplies and backpacks for local secondary school students in need, and ticket sales proceeds go to providing school uniforms. Karen Blair, owner of Karen’s Place, generously donates the use of her facility, the services of her staff and all the food for this yearly event.

The numbers are in. Riviera Nayarit had many satisfied visitors in 2014, who classified their overall travel experience with a score of 9.5 out of 10. 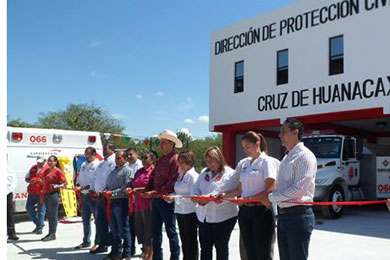 The numbers were posted in the 2014 Annual Visitor Research report of the Riviera Nayarit Convention and Visitors Bureau (CVB).

Mexicans gave the destination a 9.5 rating, residents of the United States offered up a 9.5 score and Canadians 9.4.

For 94.3 percent of visitors, rest and relaxation was the reason for coming here. Attending conventions clocked in at 2.1 percent and sporting activities 0.9 percent, with weddings and business trips bringing in 0.6 percent of visitors.

Mexican culture, golf courses and land and sea tours were the top attractions enjoyed by visitors during the last year.

The area’s price-to-quality relationship was rated by 63 percent of those polled as fair or adequate.