From Punta Mita to La Cruz, from Bucerias to Porvenir, large metal hearts have been appearing along the Northshore.

About two meters high, these hearts are collection stations sponsored by Angeles en Libertad, a non-profit that helps people with serious diseases but without sufficient money to pay for the treatments. Funds raised come mainly through the collection of the plastic tops of water and soda bottles. 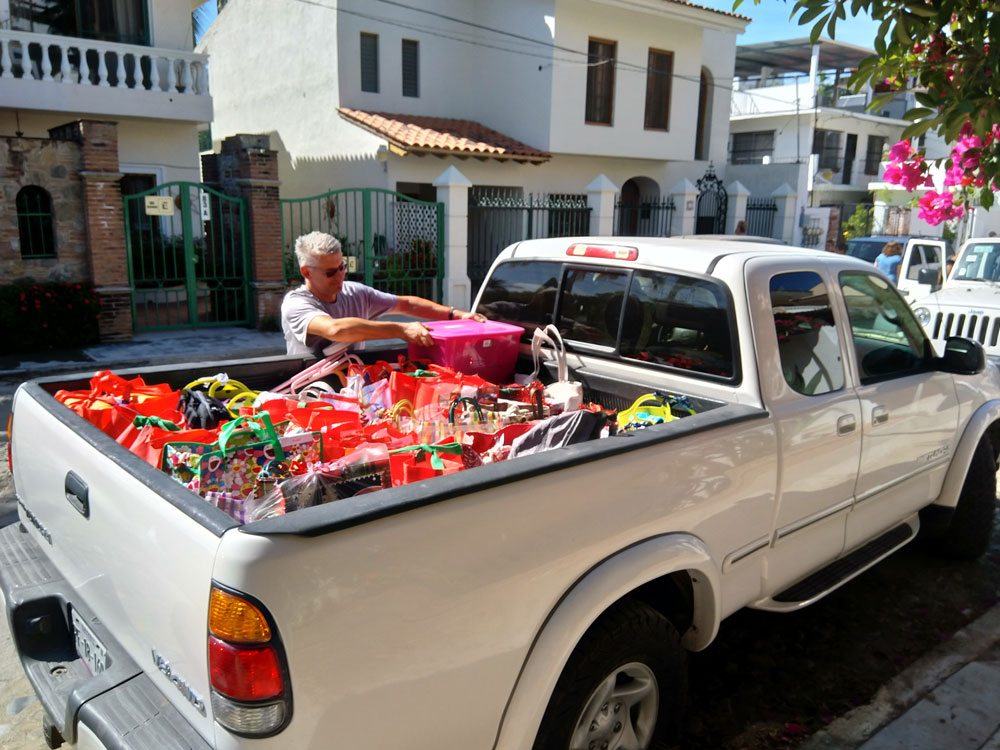 Destapate de Corazón has placed the large metal mesh hearts in public locations throughout Puerto Vallarta and Bahia de Banderas. Sponsors were recruited in each area to pay for the structures. The hearts are part of the theme “porque para todo buen acto se necesita de un gran corazón,” meaning for every good deed you need a big heart.

Residents and tourists are asked to remove the bottle caps from their plastic bottles and dispose of them by putting them into the hearts. They don’t want plastic bags, bottles or any trash in the receptacles.

Remember, trash to some means life to others.

For more information, go to facebook.com/angelesenlibertadpv.

The Bucerias Food Bank is busy all year long, but when the holidays roll around, the organizers really up the game.

Gillian Jones of Bucerias asked for people to sponsor Christmas baskets for senior citizens.  She set a goal of 244, up from 150 last year. She ended up with more than 300 of them.

The baskets were distributed at two senior citizen centers in Bucerias, with lots of clapping, smiles, hugs and thank you’s from all.

“You get more hugs in this one afternoon than the whole rest of the year,” said Jones. “The people are truly happy to be remembered for the holiday.

“It’s a lot of work, recruiting people to purchase baskets or whatever container they choose, to get the baskets turned in and get them delivered,” said Jones. ”But after seeing the results, how could I not do it?” 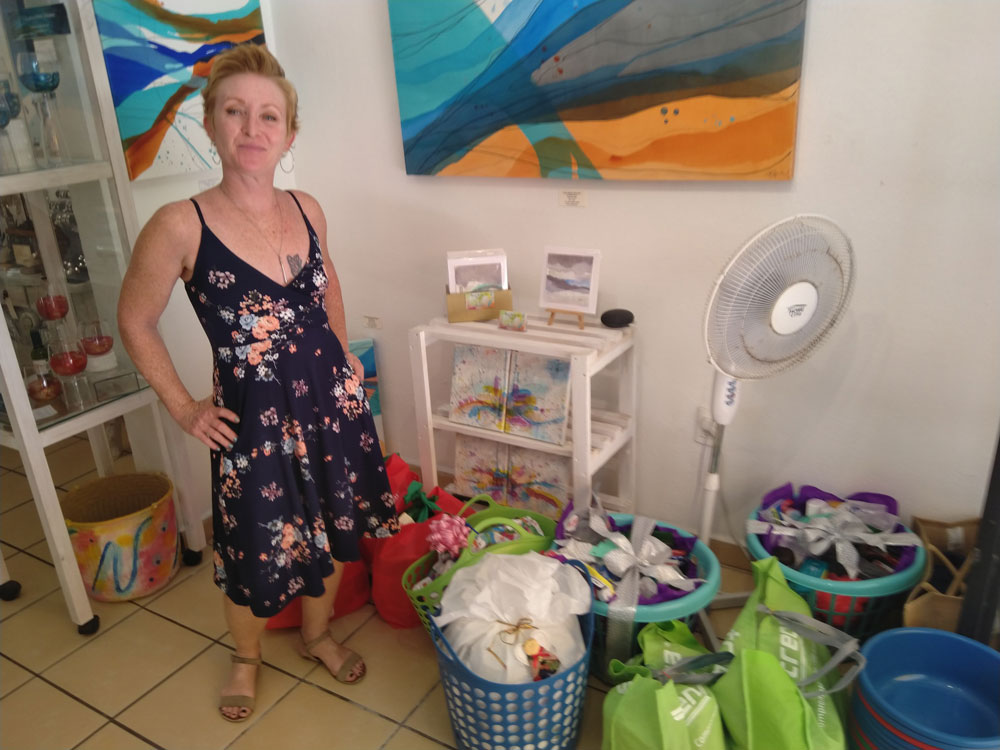 Another Food Bank holiday project is the Bucerias Children’s Christmas. For the 28th consecutive year, children of Bucerias receive toys their families might not be able to afford to buy, direct from Santa on Christmas Eve.

Food Bank volunteers have already purchased and wrapped the toys. They are now looking for volunteers to help with the big distribution.

Volunteers are needed at 11:30 a.m. on December 24, at the Virgen de Guadalupe church next to the Colonia Ovanda plaza. It is located alongside the arroyo at Calle Hidalgo.

The handing out of gifts to over 1,000 Bucerias kids starts at noon and usually wraps up about 2 p.m.

“It takes many hands and many pesos to make this annual event the success it is,” says Keith Montgomery Ashwood, one of the organizers.

The Food Bank sends a thank-you to everybody who came out to The Drunken Duck fundraiser on December 9 to support the program.  Through ticket sales, raffles and donations, 114,000 pesos were raised for the 2020 edition.

“This will allow the program to keep running strong and expanding to meet the ever growing need in the community,” Ashwood says.  “I would like to thank all of the businesses who donated raffle prizes, and all of our volunteers who made the event run smoothly.”

Ashwood added: “A huge thank you to Glenn and Tanya, the owners of the Drunken Duck. You guys are fantastic. We don’t know what we would do without your support!  Your staff was amazing as always.” 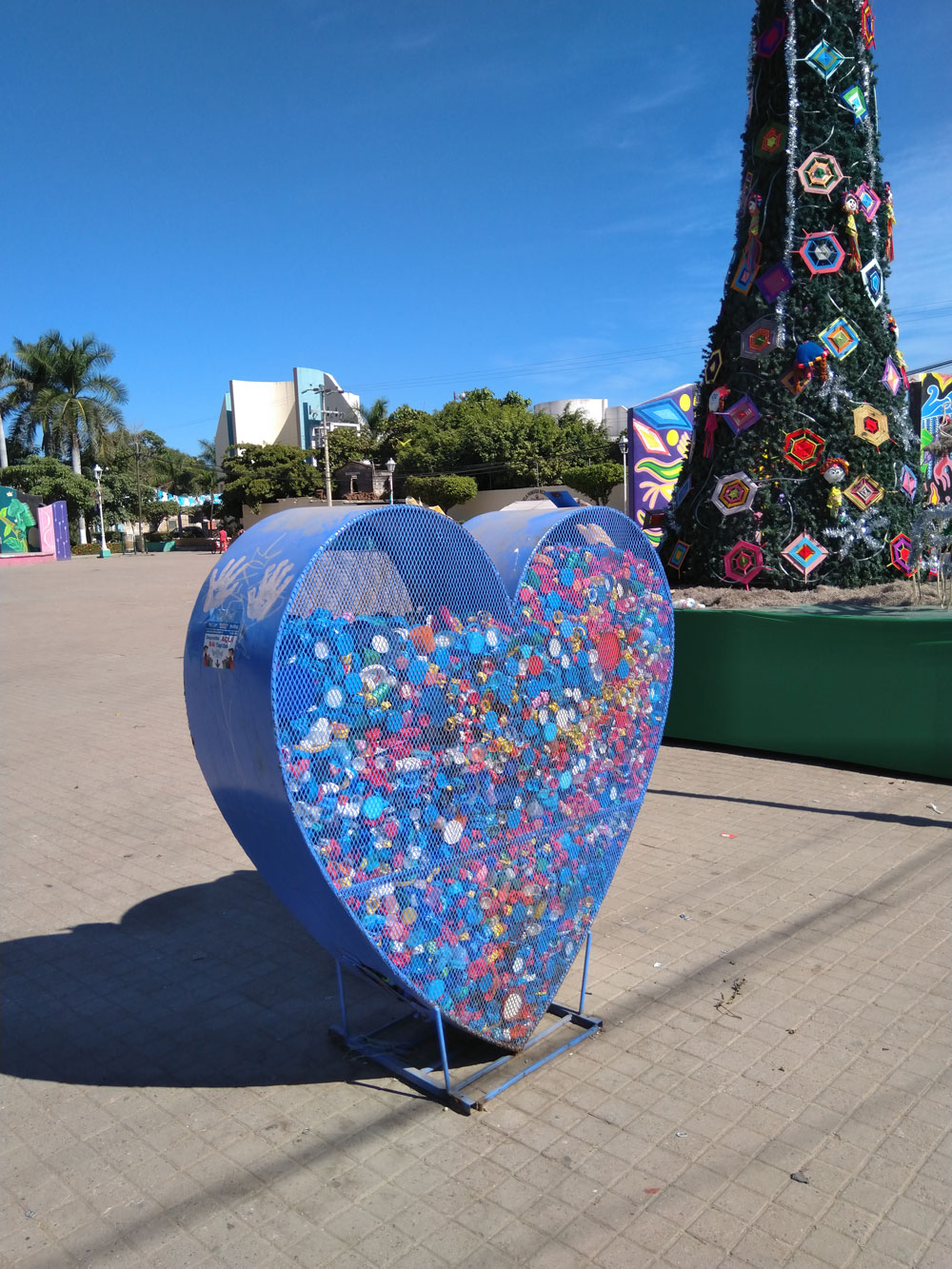 Biking is becoming a very popular sport both internationally and in the Bahia de Banderas. Not that many years ago, it was difficult to find a well-equipped bicycle shop in the Northshore.

One of the newest shops, Bike+ Life, in Nuevo Vallarta’s 3.14 Plaza, is finding its niche with its manager Noemi Castillo.

Castillo is a spokesperson for Specialized Bicycles in a role called “Ride like a Girl.”

As a result, the shop offers programs and rides for women and girls.

In recent months, “girl power” rides have been scheduled, bike and yoga programs have been held and a bike repair clinic was conducted.

“Of course we cater to all riders,” Castillo said. “But Specialized realizes that there is a big portion of the consumer market, women, that sometimes is overlooked.”

Bike+Life is a full service shop with sales, service, rentals and tours.

“Our tours are available to everyone, children through senior citizens,” Castillo said.

Recreational tours include the Nuevo Vallarta Bike tour with an optional paddleboard experience, a Bucerias Bike and Culture tour which has a leisurely ride to Bucerias, a visit to the souvenir market, stop for refreshments and an opportunity to watch Huichol craftspeople at work in the Bucerias plaza.

Castillo says their most popular tour is called the Cocride.

The three-hour tour goes to the El Cora crocodile reserve in the Quelele lagoon near the Flamingos Golf Course, south of Bucerias.

The Bike+Taco tour is almost as popular for good reason. Participants burn off the calories on the bike that they took in at a visit to a local taco stand or two.

Bike+Life offers many tours of longer and more difficult duration as well. Details can be found on their website bikepluslife.com. 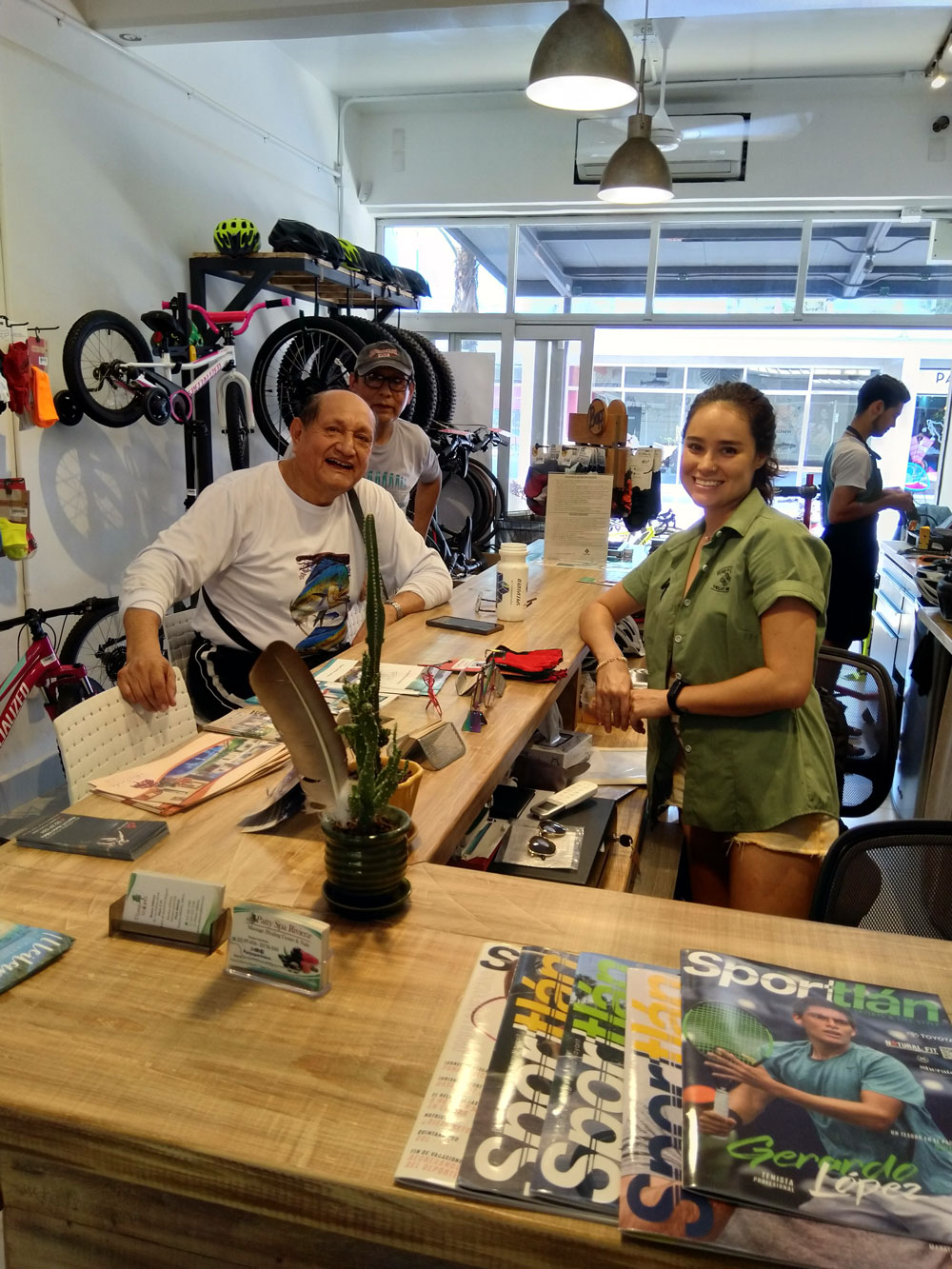 All tours can be done by e-bike with prior arrangement.

Bike rentals are also popular due to the location in Nuevo Vallarta, which is covered with smooth, safe roads to explore. Both regular bikes as well as e-bikes are available.

The Vallarta Yacht Club, located in Nuevo Vallarta, has a slate of holiday activities planned.

On Saturday, December 21, boaters are encouraged to express themselves in lights.

Everyone loves to see lighted boats during the holiday season. Boaters can decorate their boats and participate in a parade.

Starting about sundown, about 6:30 p.m., is a good time to plan to push away from the dock.

The parade route is from the Paradise Village Marina to La Cruz and loop home.

There is no formal organization, no prizes, no parade marshals ... just an excuse to show off decorated boats to entertain tourists and residents.

No holiday is complete without a big meal or two.

The Yacht Club will be having dinner and dancing on Christmas Eve, a New Year’s Eve party, and a New Year’s Day party, including traditional black eye peas, cabbage, rice and Bloody Marys.

The New Year gets off to a fast start with the Vallarta Cup 1 on Saturday, January 4, complete with after-party.