There can be no debate about the satisfactory quality of chlorinated water that is pumped out of Mexico’s municipal potabilization plants.

But on its journey through underground street pipes to homes, into old cisterns and up to grimy rooftop tinacos, the water can pick up a host of contaminants and bacteria that makes drinking it a risky step in the eyes of many.

Concern over H2O drinkability has contributed to the extraordinary rise of Mexico’s bottled water companies: Their trucks laden with garrafones (19-liter plastic bottles) are omnipresent in urban areas, especially in middle-class neighborhoods. Drivers prowling the streets yelling “agua, agua” at the tops of their voices are a part of the daily routine.

This unease has also given rise to casas de agua, unregulated businesses where consumers place their bottles into a vending unit, which can be in a wall or freestanding, and pay 10-15 pesos to dispense the water. 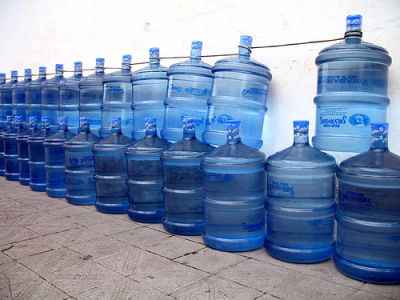 The bottled water sector’s big players – PepsiCo, Coca-Cola and Danone – charge around 25 pesos a pop for their brand-name garrafones (ePura, Ciel, Bonafont), meaning a family of four can easily spend 300 pesos or more a month on humankind’s most important natural resource. These multinationals rake in huge profits by making consumers believe their water is the only safe water to drink.

The figures are mind-blowing. Eleven percent of the entire planet’s bottled water consumption by volume is in Mexico. Garrafones account for 90 percent of bottled water sales in Mexico, adding up to almost a quarter of everything that goes into the nation’s stomach.

The tons of unrecyclable plastic churned out each year and millions of gallons of gas guzzled down by delivery trucks represents a carbon footprint Mexico cannot not be proud of.

t’s a situation that encouraged a couple of astute British expats to seize the moment and develop Aguagente, a point-of-use purified water business that employs a trailblazing operating system they believe will radically change the buying habits of millions of Mexicans and the way they use water in their homes.

Aguagente is unique, say co-founders Jean-Paul Ciantar and Garry Lea, because of its cutting-edge technological knowhow, commitment to service, direct-selling opportunities for its clients  and a social responsibility program that pledges 0.7 percent of its turnover to the neediest citizens of Mexico.

GIVING BACK TO MEXICO'S NEEDIEST

Customers put down a refundable deposit for the installation of a high-quality, imported purification system in their home (it’s compact enough to fit under the sink and can also be hooked up to a fridge/ice maker), complete with its own tap. Signup is paperless and everything is done online via a downloadable app, either on a computer, tablet or smartphone.  Like Netflix, the monthly cost of 199 pesos is paid automatically by debit or credit card, and because the company owns the equipment, customers can count on regular servicing and replacement of parts. There is also a small installation fee. 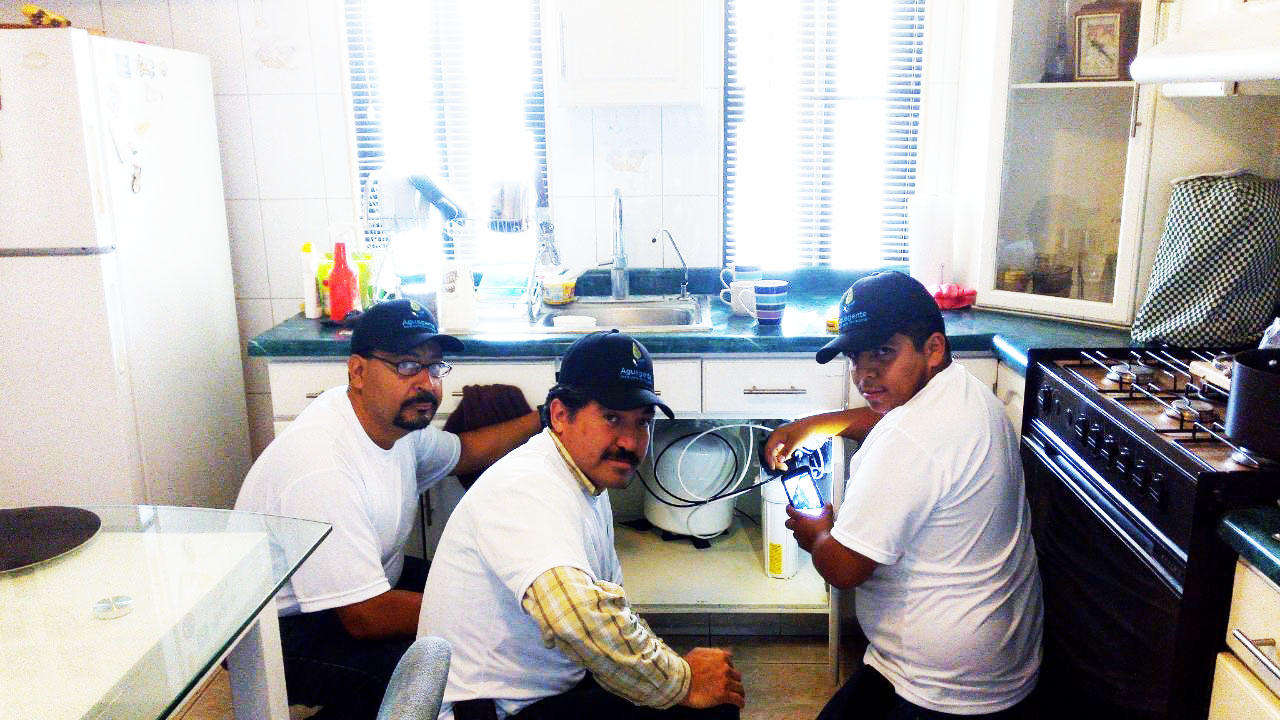 “It’s unique because we are the first provider to offer a full, life-long service instead of dumping a high margin, low quality product with no after sales support,” says Lea, whose 18-year career in the water industry has seen him transform two underperforming companies in the United States into going concerns and set up a profitable, debt-free water business in the southern Mexican city of Merida.  “A lot of people selling water purification products like to boast that their products oxygenate, ozanate or have alkaline water, etcetera. All that clutter just confuses the general public when what you really need is a replacement for garrafon water. We’re providing purified water that’s at least the same, and probably even better quality,” Lea says. 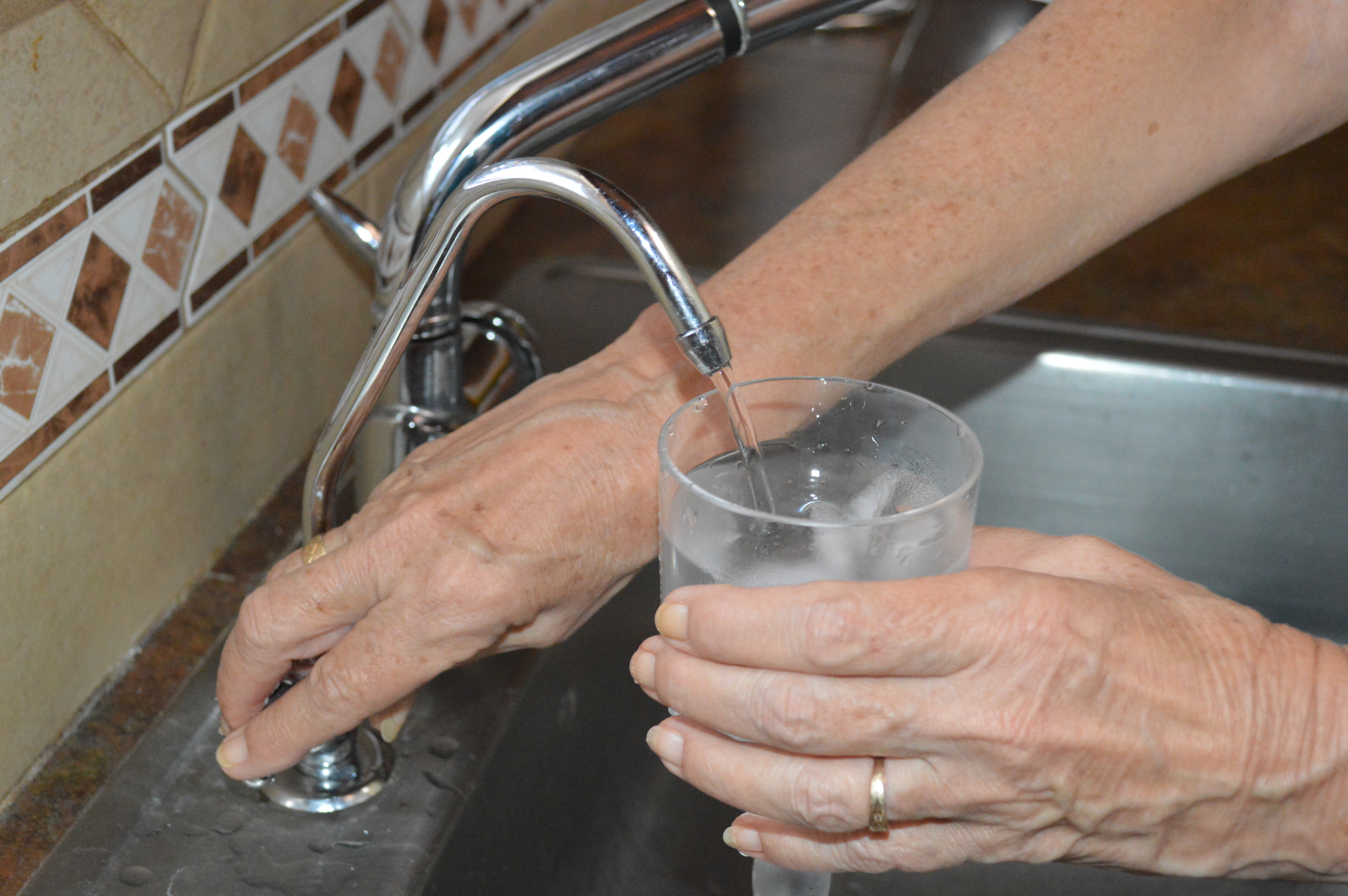 A key element to Aguagente’s model is the supplementary bonus that allows clients to receive free water for life by simply signing up six others.  The concept negates the need for a traditional sales force, says Ciantar, as customers who already use the equipment become the testimonial – not someone in a shop who knows nothing about the system.

Ciantar, a senior executive in the financial, technology and change transformation sectors who settled in Mexico in 2010, believes the country’s culture predisposes itself to direct selling, noting that Mexican people are “very familiar with this ‘go to market’ methodology.

“It’s got its origins in multi-level marketing but we’ve taken out all the negatives.  We’re not asking people to buy a ton of stock and store it in their back bedrooms like Tupperware or vitamins. There’s no entry cost to become a seller, you’re just a client. You can either pay the monthly fee and simply enjoy your water, get it for free by introducing it to six others, or obtain a recurring income by continuing the journey in the digital referral program.”

Two years in development, Aguagente has now set up shop in Guadalajara and is rolling out in the metropolitan area and along Lake Chapala’s north shore.

The short-term goal is hugely ambitious: to have three million households signed up across Mexico in five years.

Even with a low-key start-up and no traditional sales force, Ciantar and Lea believe this target is achievable.

“You need to have scalability, and the only way you can do is by embracing technology and having a computerized head office and paperless transactions,” Ciantar says.

The ball is moving rapidly: Units from Taiwan are shipping in to Aguagente’s newly opened warehouse in Zapopan, and local technicians are being hired to install and service the purification equipment. At current output, eight machines can be prepared and tested for installation every 90 minutes. 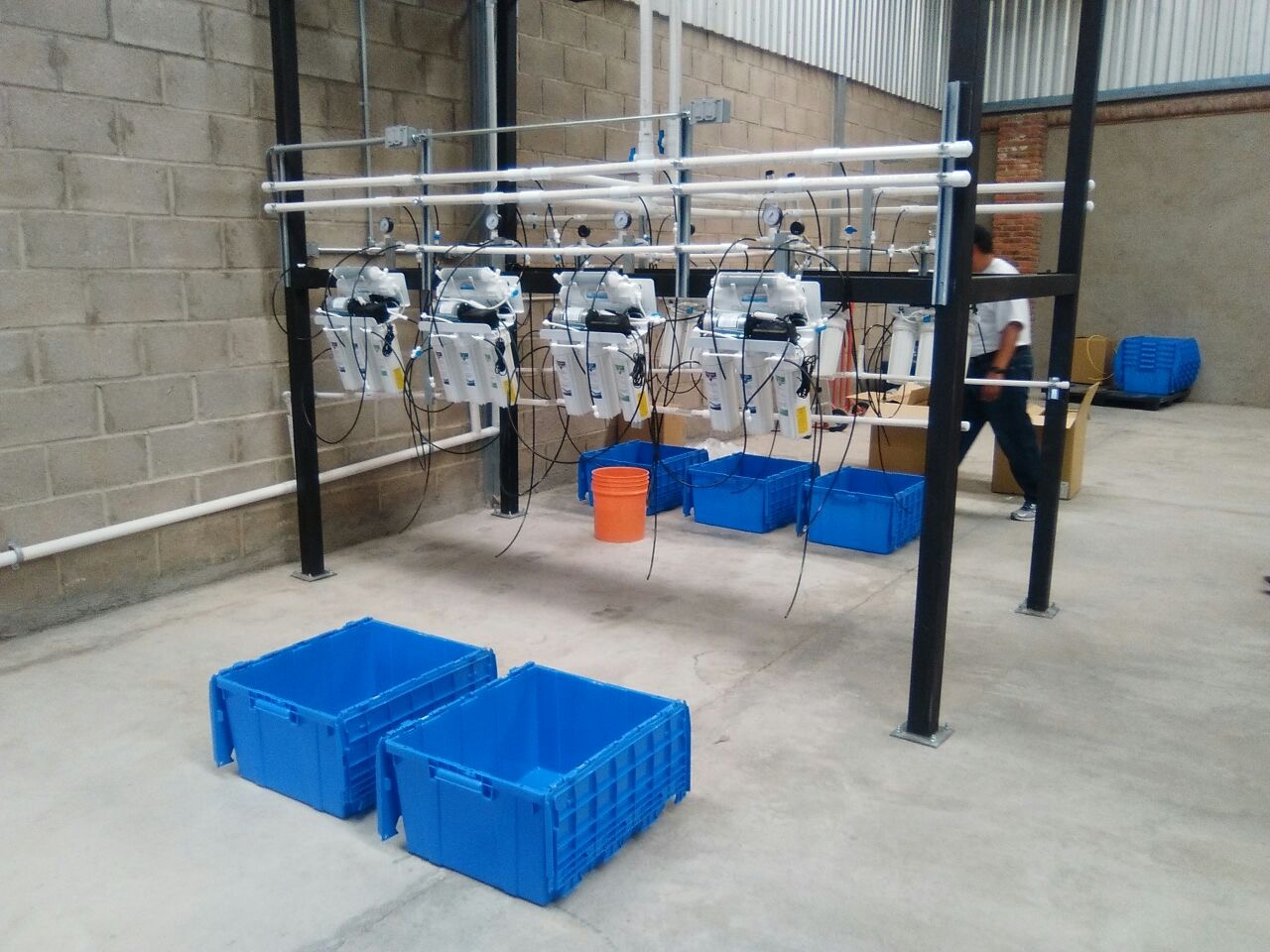 “I want to be under the radar and get an installed base big enough so we are financially strong enough to defend ourselves,” says Ciantar, who expects the bottled water companies to try and disrupt the project when it starts to snowball.

“They are going to have their Kodak moment. Do they go with digital photography or do they stay with celluloid?  Do the bottled water companies continue with the same old model of delivering their products?”

Copycats are anticipated but Ciantar reckons Aguagente will have “early mover advantage” and be a “hard act to follow” having spent two years developing its app and the system to manage it.  And with the high standard of service the project presumes, he expects customer retention rates to be well above 95 percent.

“When we get to a certain size in Guadalajara, we want to go national and there are various ways we can do that. We’ve created a distributor program which we can dilute and attract venture capital.”

Meanwhile, the expat community in the Lake Chapala area, where Ciantar makes his home, is proving to be a fertile testing ground.

Canadians Mike and Patty Mutter of Riberas del Pilar, a neighborhood noted for the poor quality of its water, had paid out 18,000 pesos for a water purification system that “kept exploding.”  The couple were forking out 200 pesos a month on garrafones before they heard about Aguagente two months ago. 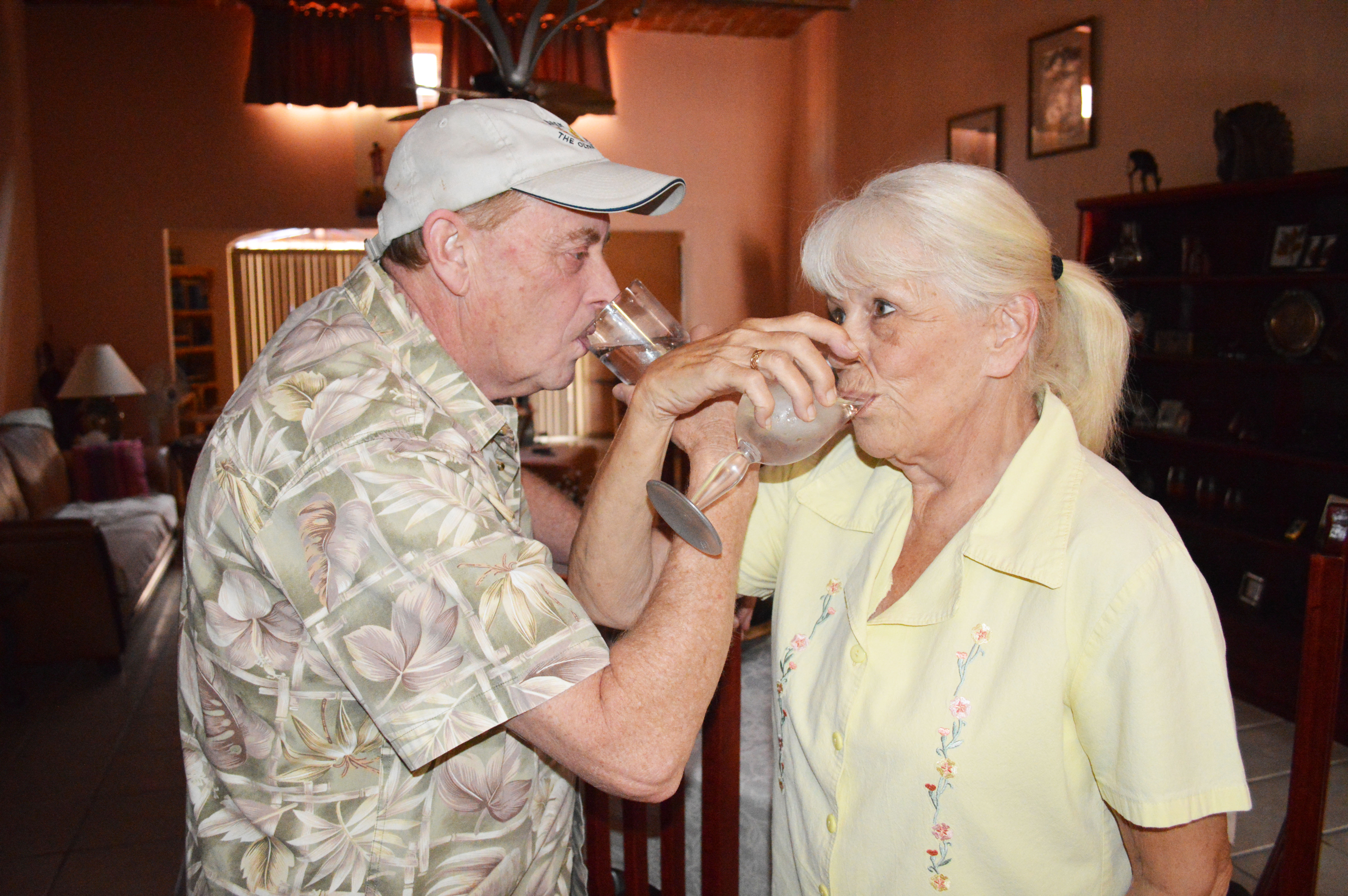 “We tested their water for total dissolved solids and it came out at 22 parts per million (ppm). That’s really good.” Mike Mutter says.  (According to the U.S. Environmental Protection Agency, the acceptable criteria for human drinking water is 500 ppm.)

Adds Mutter: “It tastes great and we also have it connected to the iced water dispenser in the fridge. We’ve already made two referrals of our friends and only need four more to get our water for free.”

Says Ciantar: “One of the joys we have is watching people’s skepticism go away when they taste the water, then stick in the TDS meter and see the results.”

Currently the equipment is being brought in from a highly reputable Taiwanese supplier that Lea says has been selling into the United States for many years.  “When we’re big enough we hope to buy the components from Asia and assemble here, which will create even more jobs.” 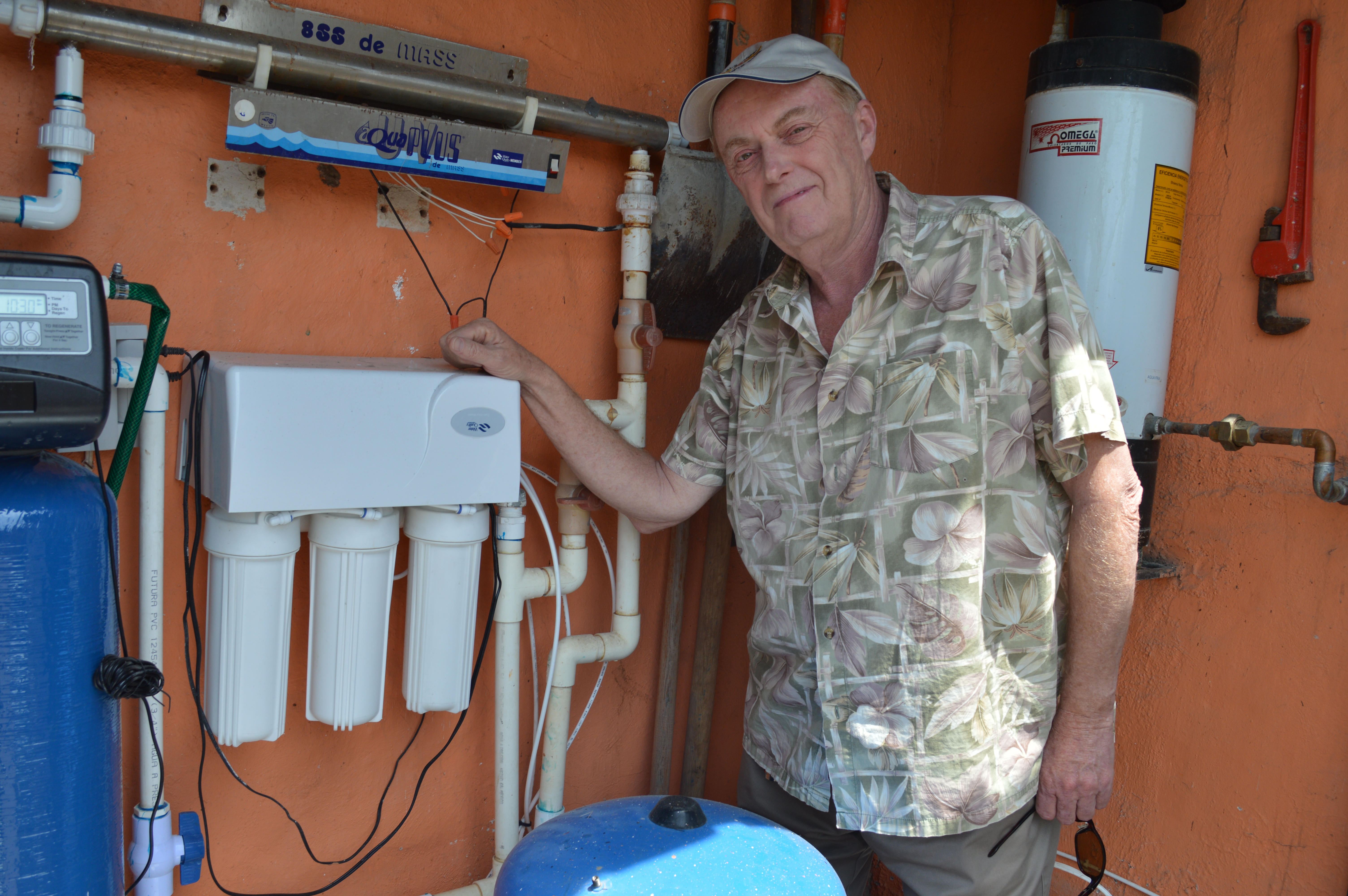 In its publicity material, Aguagente admits water purification units similar to the ones they install can be purchased for around 15,000 pesos, plus installation costs.  Just don’t be surprised if the service turns out to be nonexistent, Cinatar warns.

His vision encompasses “The Internet of Things,” a technology that will allow embedded sensors in the purification equipment to share data about their condition and servicing needs with computers at Aguagente offices.  This will mean units can be serviced when required rather than based on the calendar. Staying ahead of the game, Cinatar says, will give the business its competitive edge.

Ciantar and Lea – both married to Mexican nationals – may be the foreign catalysts for the project but they see it as very much a Mexican operation.

“It’s a Mexican company, with Mexican staff and shareholders (also some foreigners),” Ciantar says. “We’re happy to pay Mexican taxes; there are no offshore accounts to stuff profits in. And we believe our customer acquisition vehicle can redistribute the equivalent of a huge chunk of the advertising budgets of the multi-national water bottling companies to the communities that have been paying for an inferior product for so long.

“If you look at the basics, we’re offering something everyone needs, purified water in the home. We’re offering it at a low price that for most average families is the same they’re paying for garrafones. It’s more convenient, better quality water, better for the environment and a lot of the money is being put back into the community with local jobs for technicians. In addition, many of our clients who are offering the service will be earning sales commission.”

“Are we taking a leap in the dark? Perhaps. But I like to compare it with the movie ‘The Field of Dreams.’ Build it and they will come. We truly believe that.”

Go to www.aguagente.com for further details.