Base criminality? Poetic justice? Whichever way you might lean, it’s safe to assume that the mitered grandees of the Archdiocese of Guadalajara are none too pleased by a recent spate of stealth thefts by brazen (one assumes) and  less-than-faithful parishioners.

It’s a scam so simple as to incite envy: place a fake bill of considerable monetary weight - say, one valued at 200 pesos - in the collection plate and take out however much change you see fit.   The perpetrator comes away with a tidy profit (if he waits long enough for the kitty to properly sweeten, that is) and maybe even has the temerity to openly smirk in satisfaction at having jeopardized the chances of so many believers’ entry into the eternal bubble bath in the sky. 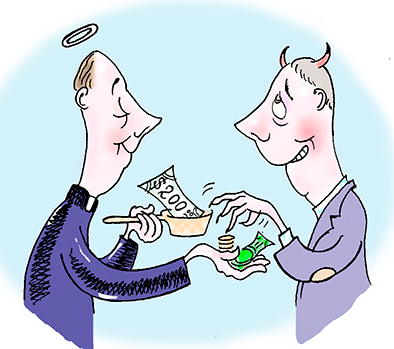 According to Father Antonio Gutierrez Montaño, the Archdiocese spokesman, the locations of the thefts haven’t followed a predictable income-based logic.

“It’s not as if [the thefts] take place in communities with certain characteristics – that is, in poor neighborhoods or rich.  These shameful occurrences are happening everywhere,” stated Father Montaño.

Another type of opportunistic larceny endemic to churches throughout the land is the absconding with of donation boxes situated below the mournful gazes of saints, and/or relics said to have belonged to them before their untimely (or exactly-timed, depending on how you look at it) martyrdoms.  In response to this, the boxes have been bolted down and their slots narrowed.

And don’t forget about that old chestnut of wealth-redistribution: pickpocketing.  This March, it was made known by the cardinal of the Archdiocese, Francisco Robles Ortega, that cameras had been installed in many places of worship within his immense administrative purview in response to the annoyingly prolific pilfery by nimble-fingered professionals of various articles belonging to the attending faithful.

An obvious question to ask, at least for the credulous, might be, “Is nothing sacred!?” Whether that question should be posed in regards to these recent thefts or to church-sponsored electronic surveillance is left up to the reader’s discretion.