Astute observers of urban milieus, be they dilettantes or professional urbanists, can’t have failed to noticed the proliferation in the past few years of a specific trope which could be described as a haute bourgeois mutation of the classic suburban strip mall, within whose confines are found, say, a collection of boutiques, a variety of vendors hawking whichever foods are currently the hotness  (Korean tacos, pork belly Bao, fried ants), and a couple of guilt-expiating temples of self-flagellation (pilates, yoga, weight-lifting), all unified by a shared design aesthetic.  The Via Libertad complex in Guadalajara’s Zona Rosa (Pink Zone) – composed of Torre Libertad, A La Libertad and Mercado Mexico – could be said to be of this ilk. 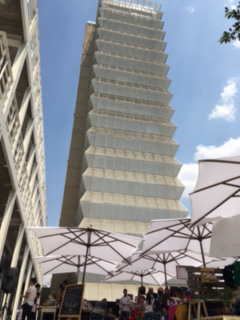 In the 1970s, barrio Colonia Americana, a lightly scuffed but friendly, center of bohemian activity – flanked on the left and right by Avenida Chapultepec and Enrique Diaz de Leon Sur and sandwich-pressed from above and below by Lopez Cotilla and Mexicaltzingo – was home to what was then Guadalajara’s second tallest building, a slender structure dubbed Torre de la Paz after the large thoroughfare it looked down upon to the south.

At that time, Torre de la Paz was home to various medical practices (dentist offices, private medical practices, and the like), and its surrounding space was a popular place for the community to meet.  Then, in 1988, the patriarch of the family that owned it along with two adjacent buildings – both long, two story affairs – died.  Years later, his children sold the property to Creaste, a development firm with an eye towards re-conceiving the complex as a center of social life lubricated by food, drinks and the acquisition of consumer goods.  Two years ago, with the help of Guadalajara-based architectural firm SPRB, the renovation and re-imagination of this formerly utilitarian aggregation was complete.  The two firms had high hopes for Via Libertad’s potential ability to inject a fresh economic vitality into the neighborhood.

By that measure, the two-year-old Via Libertad has been a success, helping to attract a well-heeled, young and hip breed of creative professionals to live and work in the area – as well as U.S. foreign service officers (the U.S. Consulate is only a block away) – and specifically inside Torre de la Paz, given a facelift and re-christened Torre Libertad.  That sunny appraisal was offered by Andres Sanchez, the affable young man who manages the property.

“Everyone is happy,” he told the Reporter with a grin.  “It’s a meeting point for the community in La Colonia.  And people from other parts of Guadalajara have started coming here, too – from Providencia and Puerto Hierro [two upscale neighborhoods to the northwest of the city], for example.” 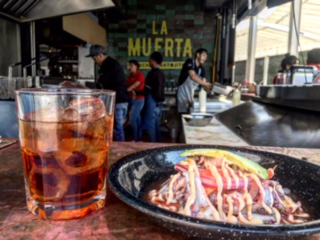 Sanchez attributed this success to the approach the two aforementioned commercial entities adopted when conceiving of and executing the center’s transformation.

“Instead of tearing everything down and building something ugly and monstrous in its place, they respected [the location’s history],” Sanchez observed.

Guadalajara is no stranger to indoor marketplaces where you can shop and be fed. Its centro historico hosts two covered markets (Corona and San Juan de Dios) where the surrounding community can eat lunch, breakfast or dinner and browse an endless phalanx of backpacks, sunglasses, artificial flowers, shoes, t-shirts, barks, salves and exotic birds, to name just a small fraction of what these emporiums have to offer.

Where your typical indoor market in Guadalajara trades in the sheer quantity of its comestibles, the majority of which are Mexican, Mercado Mexico offers variety.  Examples of this diversity include an eatery offering east Asian greatest hits (bao, ramen, chow mein), a gyro shop, and a pastry spot purporting to offer “hedonism and the cult of the donut.” Pizza, charcuterie, pasta, roast meats, sushi, Danish confectionaries ... they even throw Mexico a bone in the form of a cevicheria and a joint specializing in carne en su jugo. 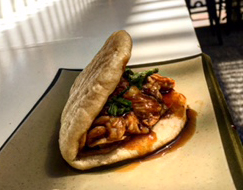 However, the Mercado’s internationalist aim, while noble, needs a little fine-tuning in order to guide its arrow closer to the bullseye of successful culinary execution.  The gyro was underdressed and dry, its meat chewy (the absence of a vertical rotisserie was telling); the pork bao was overly sweet, probably due to an excess of corn starch, and the ceviche was slathered with a spicy house mayonnaise that drowned out whatever flavor the octopus, shrimp and fish might have once possessed.  On the other hand, great coffee is made at a little shop at the base of the Torre de Libertad by a very serious man clad mainly in denim. A negroni, fashioned at the site of the mayonnaise incident, was well-balanced, smoky and cold.

Across the courtyard from the Mercado, A La Libertad beckons with an odd array of goods and services: an “urban bike gallery”, a barber shop, and a jewelry shop; a pet store, an art gallery, and a toy store that promises “more than just toys”; a yoga studio, a boxing gym with exquisitely stitched black punching bags, and a small Asian market.

Sunday sees a small outdoor market trafficking in crafts and packaged artisanal food stuffs occupy the courtyard, which, when not invaded by said mercantile hullabaloo, also functions as a space for live music.

Above it all soars the serene, impeccable Torre Libertad like a bleached accordion set on end and stretched to its limit, the omnipresent symbol of the Via Libertad’s upscale ambitions, stretching high enough perhaps to descry through the golden haze and heat distortion of a Guadalajara afternoon the bulky forms of Mercados La Corona and San Juan de Dios, where despite the lack of a professional mustache landscaper or expensive imported ham you’re sure to be provided with a well-made taco al pastor or steaming bowl of pozole.

That may seem like damning criticism, but places like Via Libertad, while very handsome and having (presumably) good intentions, often let substance stumble into a ditch while distracted by style.  It’s important to point out when the emperor has no clothes.  Via Libertad isn’t entirely nude (good coffee, cocktails, helpful staff), but its toga needs a little tightening.

Mercado Mexico is open from 10 a.m. to 11 p.m., although individual vendor hours vary.  Hours vary similarly at A La Libertad.   Go to via-libertad.com for further information.  Via Libertad is located at Calle Colonias 221, Colonia Americana, one block east of the U.S. Consulate.