Sitting in the sun-lit office of Avenida Chapultepec-adjacent tattoo shop Chamuca at three in the afternoon, owner and artist Rodrigo Ruiz related an anecdote which may serve to give nuance to the perception still held by a minority, that of tattoo artists as untrustworthy occupants of the squalid depths of society’s lower strata.

“I had a guy come in,” Ruiz told the Reporter, “who was burned as a child, leaving a scar all over his chest and entire left arm. Every time he would go to the beach, people would ask him, ‘What happened to you!?’ Or children would stop and point, saying ‘He looks like Freddie Kruger!’

“After I performed my service for him, people focused on the beauty of the tattoo and forgot the scar.” 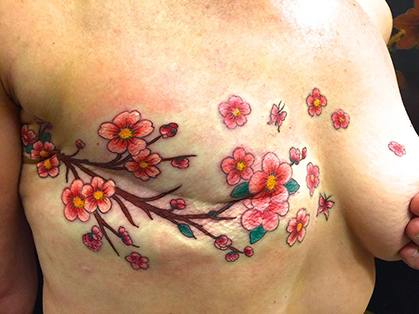 As much as we like to believe we’re in control of our lives, the fact is that life is basically a drunken vandal running rampant through the midnight streets of our bodies and minds, smashing windows and kicking over garbage cans. Booze, food, sex and extreme sports are just a few of the ways we cope with this damage, be it mental or physical. Externalization is also a common method, wherein the subject lashes out at loved ones or strangers in an effort to disgorge his/her internal agony.

Many tattoo artists are called upon to cover or work with scars, marks which can be the legacy of, among other things, gun-shot or knife wounds, C-sections, cancer surgeries or suicide attempts. This service may offer the recipient a healthier way of coping than those explicated in the previous paragraph by offering the consolation of art while transforming the sufferer’s association with his/her scar from one characterized by shame to one of acceptance and pride.

For Pedro, a 21-year-old artist at Body Art —also located near Chapultepec —  there is a clear parallel between his profession and that of a healer.

“I believe it’s a part of the job. More than just an artist, you’re like a shaman,” stated Pedro.  That may seem to the cynic to be a bit of self-important bloviation, but it’s hard to argue with after he mentions having covered more than one suicide scar in his young career, identifying butterflies, flowers and various plants as being the most common requests to conceal them — symbols of life that function as a repudiation of the client’s sought-after demise.

However, vestiges of life’s cavalier sadism aren’t always visible. For instance, in an effort heal the psychological wounds of grief, many of Pedro’s clients request tattoos paying tribute to deceased loved ones.

“We’ve tattooed many people who’ve experienced grief or serious [mental] trauma. The work we do helps them heal psychologically,” he assured the Reporter.

Tattoos often take on a talismanic quality, especially in Mexico, according to Ruiz. That the Catholic Church — many of whose rituals involve manual manipulation or imbibing of objects imbued with a special significance — continues to be involved in people’s lives here and elsewhere in Latin America is a testament to our species’ enduring need to assign meaning to objects both exquisite and quotidian. And perhaps modern consumerism — which runs especially rampant in the United States — can be seen as capitalism’s facilitation of our urge to identify with objects, to make them an extension of our bodies and/or spirits. Which brings us back to tattoos.

Ruiz pointed out that skin decoration has played an important role in Mexican culture for centuries — long before the arrival of the Spanish or even the hegemony of the Aztecs — pointing to the still-common request for tattoos featuring various personages, spirits and deities figuring in the traditions of Mexico’s many tribal groups, such as the Huichol and Maya, to name but a few.

“A lot of people get Mayan talismans having to do with health. And we see a lot of Huichol tattoos, very beautiful ones,” said Ruiz. “The cool thing about Mexican tattoos is they relate to many different folk traditions, not just Aztec.”

Veering suddenly from the metaphysical and spiritual to the practical difficulties inherent in working with scars, Ruiz explained that there are — at least in his shop — protocols to follow with this type of work.

“You have to be cautious,” said Ruiz. “Not all scars can be tattooed over. For example, if it’s a second or third degree burn, the scar tissue is very, very thin - extremely easy to tear.”

He also requires that the scar be completely healed. Preferably, a year or more will have elapsed from the time of injury until the moment at which the tattoo gun meets flesh. He warned that judging the state of a scar only by its surface appearance is a mistake; there still may be healing going on unseen inside the damaged tissue.

And, as scar tissue is more easily infected than normal skin, he often recommends that people with diabetes, AIDS, and other diseases which make their hosts prone to life-threatening infection avoid getting tattoos on scars — or at all. The issue hits close to home for the artist.

“My uncle, a diabetic, died of complications resulting from a small infection on his fingernail,” said Ruiz

However, hope is not lost for clients with scar tissue too thin to tattoo over; in that situation Ruiz often uses the scar like one would a Rorschach ink blot, its shape suggesting an object or idea which the artist then develops by tattooing carefully around its perimeter.

While Ruiz and a many other artists around the city are perfectly willing to tattoo over various scars, there is one artist for whom it is a specialty. Michelle Alejandra Gomez Cortes, tattoo artist at Tatudemia (yet another Chapultepec-area tattoo parlor), caters specifically to female cancer survivors, many of whom have had breast-removing mastectomies.

Valerie Rhoda, a counselor based in Ajijic who runs several support groups — including one for cancer survivors — is well-acquainted with the practice of tattooing over mastectomy scars.  Her explanation of its function echoes those of Ruiz and Pedro.

“Turning a scar — which is sometimes seen as an assault on one’s body — into something beautiful and celebratory…not only is it reclaiming your body, its reclaiming your life,” said Rhoda.

The art of tattoo, while hardly seen these days as being of a piece with murder, theft and piracy, is in some quarters still looked at with a jaundiced eye; the service rendered by tattoo artists of scar-beautification may itself function to rehabilitate the art form’s image in the public eye even as it rehabilitates the self-image of the recipient.