Along restaurant-laden streets in one of Guadalajara’s noted culinary districts, where many eateries are shuttered these days due to government “stay at home” directives, traffic is of course sparser than usual. 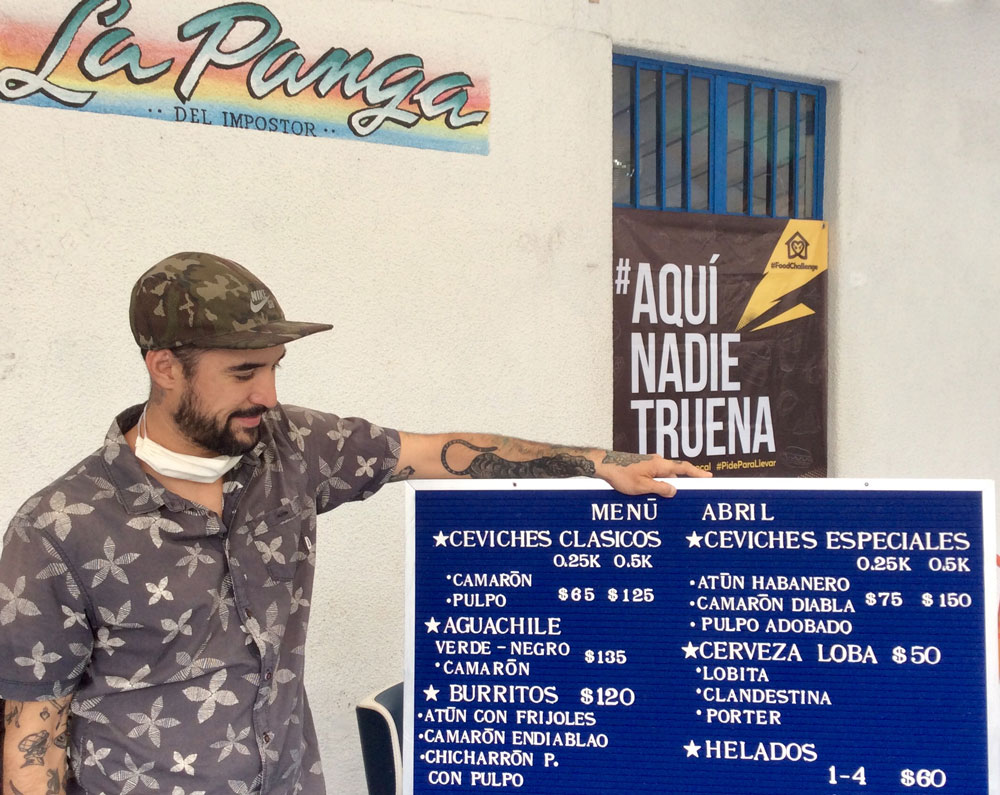 But the paltry flow of cars and trucks is augmented by a greater-than-usual showing of motorcycles bearing the colorful, insulated packs of Uber, Rappi and Didi—food delivery services that are doing a brisker-than-usual business bearing meals to people isolated in homes.

Some of the restaurants that have not closed have reduced their tables, hours and menus. And waitstaff generally wear masks and gloves, stand a healthy distance away from patrons and even spray coins and bills with sanitizer.

At La Panga, in a quiet, leafy part of Avenida Lerdo de Tejada near Union, masked staff are making an extra effort to connect with customers, sometimes lowering their masks to reveal smiles.

This outdoor seafood restaurant with about 12 tables, until recently thronged with local patrons who swear by the squid tacos and ice-cream cones, displays a large banner with the Twitter moniker “#Aqui Nadie Truena” (here nobody fails).

“It’s a group of small businesses united to stop failures,” said a waiter. “People worked very hard to build their businesses.” A look at the Twitter page reveals that the group is also strongly oriented toward cleanliness measures.

“We are selling about 25 percent of our usual sales … mostly to some neighbors. Our customers who come from further neighborhoods are staying at home. We can’t reach all of them because the delivery services are limited to five kilometers. Another issue is that we offer more than food; we offer the experience, and that is hard to just pack and deliver.

“The break helped us disconnect from the tension, because some of the staff were very worried. So now that we’ve re-opened, I gave them the option to ‘pause’ if they’re somehow incapable of work, either emotionally or physically.

“Some of them are staying home and that left us with less staff, but also less worries about paydays. We are all committed—staff and employers—to be back on track once this thing passes. The staff remaining are being super supportive and flexible. They understand the commitment this requires.

“So I guess trust and confidence has been key to working during this harsh time.”