As interesting as the aerial drone photographs are in the article “A bird’s-eye view of Chapala” (GR June 17), we feel obliged to point out certain hidden facts and dangers about this burgeoning practice.

The article’s author (and source of the aforementioned drone photographs), Bernd Sawatzki, says that in Mexico there is little in the way of strict rules.

He states one should use common sense and not fly above 400 feet so as not to interfere with flight traffic.  But what about who or what is below 400 feet? Can one legally hover this toy 20 feet above someone’s head or house? Yes, one can. But should one?

In a noisy urban environment the noise of these drones is perhaps lost, but if one lives in a quiet country setting, as we do, then the sound of a million bees hovering above one’s head for long periods is most annoy1ing. That, along with the invasion of our privacy, are what we and our neighbors have been experiencing from this particular drone flyer for some time now. Mr. Sawatzki has been flying his drone regularly over our property, and many times hovering for long periods. 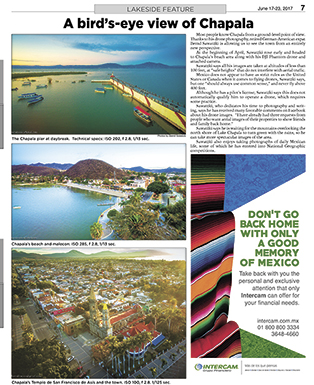 The other day, that same drone owned by Mr. Sawatzki (who lives in the housing development above the hill from us) crashed into our property right where we were about to walk, narrowly missing our parked car.

Who would have paid for any damages? What about medical expenses if one was lucky enough not to be killed? Should a license requiring liability insurance be a prerequisite? A drone is no less a lethal object than a car is.

What right dox1es an operator have to hover over one’s property making a lot of noise and taking photographs? How do we know what they are photographing? Maybe casing the place for robbery? Spying on people sunbathing? Until Mr. Sawatzki’s drone crashed on our property we did not know who it belonged to so that we could ask him to cease his activities.

We were neighborly enough to return this annoying toy to its owner (after he entered our property without asking permission) even though we were not obliged to. In fact, we’ve been told by the authorities that we were obliged to report the incident to the police as an “aerial airborne object accident” and that it would have been up to them to return the drone to him after an investigation was carried out.

Talking with the photographer/drone-owner, he was oblivious to the fact that his hobby was disturbing his neighbors and could also be dangerous. He stated he had “no idea why the crash happened,” which does not give us much confidence.

One big difference between these drones and the other airborne vehicles we see along the lake is that instead of moving quickly through the airspace, they hover for long periods over one place.

We are not trying to be killjoys, but we are asking that operators of drones become more aware of their impact in this increasingly noisy and less private world.
In our own home we expect privacy and not to be looking up for crashing drones. Is that asking too much?