Carolina Lopez, who is scheduled for the first of two total hip replacements in October, remains on pins and needles. She is still short of the funds needed for surgery.

A “Help Caro to Walk” fundraiser is scheduled for the end of this month. Despite widespread sponsorship and publicity through posters, flyers, print ads, articles and social media, organizers report that so far only about half of the event tickets have been sold. 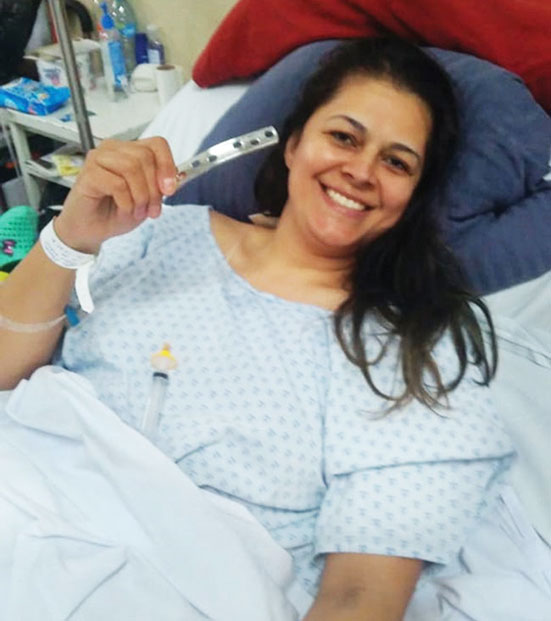 In an area known for its community involvement, why so few ticket sales? Well, that’s what puzzled organizers have been asking people they encounter.  Mostly, it appears that Caro is just not well-known. She is single, unable to work, lives (just north of Chapala) with no familial support. She is being cared for by best friends Zuzu and Daniel Cordero as she awaits surgery.

Also she “looks like an actress or model,” as described by one person, “which does not inspire sympathy.” Further, Caro always seems to be smiling – definitely not the helpless, forlorn look that says “help me.” Instead, she is spunky and optimistic, always struggling to attain as much normalcy as possible in her life.

Lastly, she can walk a short distance  – with assistance, slowly, laboriously and painfully. Longstanding damage and disintegrating bones are gradually robbing her of even that small ability.

But there is definitely a private and somber side to Caro, battered by life’s repeated blows, events which have left her afraid to get her hopes up in spite of surgeons’ hopeful prognosis.

Caro was gravely injured in a bicycle accident at age 12. Now 38, she has spent 26 years with chronic pain and limited mobility.

The past few years have been especially trying for Caro. Her husband of ten years left her after deciding he wanted children, which was medically impossible according to Carolina’s doctors. Needing to support herself, she then had to drop out of college. Later, when she unexpectedly (miraculously, according to her doctors) became pregnant, her longtime novio made a quick exit to avoid the responsibilities of fatherhood.

During her pregnancy, her father (her lone familial ally) died of cancer. Caro managed to carry her baby to full term, sacrificing most of her remaining mobility for her lifelong dream of motherhood. But her beautiful infant son Gael Alexander died in her arms shortly after birth, due to a rare heart defect.

So, that smile hides some major heartaches, and Caro is still smiling, bravely hoping for a future that includes a normal, productive and pain-free life. But that future appears out of reach without help.

Assuming she can come up with the funds to purchase the needed prosthetic hip devices (about 45,000 pesos each), surgeons at Guadalajara’s Hospital Civil will do the surgery. Longtime friend Zuzu has driven Caro to the Hospital Civil around 30 times this year as preparations for surgery are finalized.

Individuals in our community are asked to take a closer look at this beautiful, smiling and deserving young woman, and come to her fundraiser Thursday, August 29, 5 to 8 p.m. at Adelita Bar and Grill in San Antonio. Door prizes, a 50-50 draw, live and silent auctions, live entertainment and Adelita’s great food promise a very enjoyable evening. Fundraiser event tickets are available at It’s Kinda Bazar … and Kinda Not in Riberas del Pilar, Diane Pearl gallery in Ajijic and Adelita’s in San Antonio.

Additionally, donations of cash and saleable items are being collected by It’s Kinda Bazar … and Kinda Not. Just specify that your gift is to Help Caro to Walk.

For additional information, visit the BestofLakeChapala.com website and read Caro’s moving story entitled “Surgeons offer hope to local woman.” Additional updates can be found on Facebook at Help Caro to Walk (English) or Ayuda a Caro a Caminar (Spanish.)