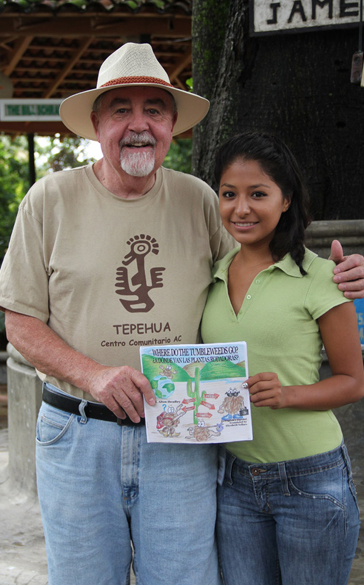 Mike Headley started dreaming up tales for kids as a young father raising his own brood of three. It wasn’t until his offspring left the nest and he went into retirement that he found the time and impetus to put the stories down on paper to share with a wider audience. His recent discovery of a Chapala teenager with an innate knack for cartoon drawing finally put him on the path towards publication of his first book, titled “Where Do the Tumbleweeds Go?”

After a long career as a project manager in industrial and commercial electrical construction, Headley and his wife Kay moved from Colorado Springs to Ajijic two years ago. Since then he has enjoyed the freedom to write reams of poetry and fully develop the plots and language for a dozen children’s stories that had floated in his head for many, many years.

As the tumbleweed tale took solid shape suitable for print, the author got the idea to create a bilingual version that could be enjoyed by English and Spanish story lovers alike. At the same time, he began searching for an artist capable of illustrating the book.

The ah-ha moment came when he spotted a whimsical drawing by Jessica Alejandra Garcia Mendoza among a batch of note cards on sale from the Lake Chapala Society children’s art program. The large eyes of her cartoon figures perfectly fit with his vision of the rambling plants that star in the mysterious narrative.

Garcia is a 16 year old student at Chapala’s Escuela Preparatoria. She has attended the LCS art program since the age of six and as she continues refining her own skills, now takes part among the core of workshop volunteers. She was intrigued when Headley approached her with a proposal to create drawings for his book. “I’m not really familiar with tumbleweeds, but I caught on once he explained what they are and showed me a copy of the text,” she recalls.

Enchanted by her first two pictures for the story, Headley next brought in Garcia’s mother to draw up a formal work contract to employ the minor age artist as his illustrator. Since sealing the deal, the teenager has spent the last two months completing a series of two dozen color pencil drawings.

Headley is thrilled with the results. “Jessica is a talented artist with a strong intuitive sense for story-telling. With no prompting, she added all kinds of small little details that really captured the essence of the book,” he marvels.

The book project is now entering the final stage of self-publishing production, with a tentative release date projected for early October. Headley recruited long-time Ajijic resident Elizabeth Sellars to pen the Spanish translation of his story in a similar verse-like cadence that appeals to a four to ten year old target audience.

The story ends with a great twist as the author leaves the title question open, asking readers to email him their thoughts on the final destination of wandering tumbleweeds.

After putting all the pieces together, just last week Headley once again connected with Garcia to show off the fully illustrated dummy of the final product. She is more excited than ever about getting involved the storybook pursuit.

That’s not to mention the potential for future collaboration between the elder American writer and the budding Mexican picture-maker. They appear to be a good match for other children’s stories Headley has still under wraps, including the titles “Oh, the Things you can See when you’re Three-Foot-Three,” and “There’s No Monster Under my Bed,”  along with a series of tales featuring Robert, the one-winged horse fly, a protagonist who ably copes with a handicap in facing life challenges.