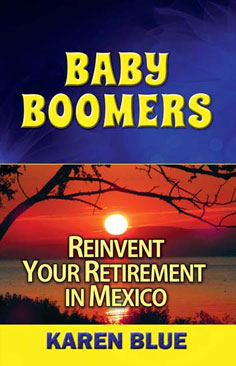 A couple of weeks ago she reached another milestone after retooling the original concept for a broader audience and spending two years on research and writing to produce “Baby Boomers: Reinvent Your Retirement in Mexico.”

Unlike many other guides formulated around the same subject matter, this isn’t a gospel aimed at selling a south-of-the-border paradise to the coming wave of middle-aged folks on the verge of making critical decisions on how and where to spend their golden years. Instead, this book offers a realistic appraisal of the hurdles involved in adapting to life in a foreign land and the magic and delights that await open-minded boomers capable of making the leap, as voiced by those who have lived the experience.

An opening chapter defining the baby boomer generation and the closing pages summarizing the pros and cons of settling in the lakeside area serve as the bookends for the 20 true life stories that make up the heart of the 200-page tome.

Page by page, Blue builds a well-rounded portrait of the expat community by sharing a series of interviews she conducted to explore common issues faced in day-to-day life, such as cost of living, health care, crime and security, fitting in on unfamiliar turf and homesickness. Her sources represent the full scope of social makeup the area’s foreign populace.

The book is divided into three central segments separated under the subtitles “Building a Better Life,” “Living with Passion,” and “Leaving a Footprint,” representing outstanding characteristics of the people being profiled.

Throughout the work the author conforms to a fairly consist formula. While the device might breed monotony in the works of a less skilled writer, Blue uses it as a tool to craft chapters that are just right in length, rhythm and detail to keep the reader engaged and eager to delve into the next encounter.

Her vivid descriptions make it easy to visualize the people she talks with, the diverse types of homes they inhabit and their everyday lifestyles.

She has a knack for diplomatically getting into straightforward discussions on financial matters and eliciting extremely candid revelations on deeply personal matters such as living straight or gay, single or with a partner, broken marriages, death and loss, distances and estrangement to family members left behind.

Her style is likely to make you sense you’ve slipped behind the walls to eavesdrop on intimate conversations. The effect is positively addictive.

If you think this book will have no appeal because you’re already well settled and knowledgeable about Lake Chapala living, reconsider. Although you’re likely to come across some of the people you have met here, chances are this book will allow you to get to know them a lot better and gain a fuller appreciation of their strengths, weaknesses, special talents and unique personal qualities. You may be surprised and even inspired by the positive experiences of fellow expats, particularly those whose approach to retirement has set them on new pathways towards realizing new or unfilled dreams and the pursuit of altruistic causes.

At the end, the one individual with whom you’ll become the best acquainted is the author herself, a lovely woman blessed with charm, a sunny disposition, ability for keen observation and a talent to give readers true insights on the very special land where thousands of outsiders have chosen to put down roots.

The book may be purchased online through amazon.com or barnesandnoble.com. It is also available locally at Diane Pearl Colecciones, the Lake Chapala Society and La Nueva Posada, with a cover price of 200 pesos.