In his documentary novel, “All They Will Call You,” Mexican-American author Tim Z. Hernandez tells the tragic story of a 1948 plane crash in California that killed 28 migrant workers being deported to Mexico. One victim was from Jocotepec.

Officials and the news media called the unidentified victims “deportees,” and buried their remains in a mass grave near the crash site. Many loved ones and relatives endured decades waiting for official identification, confirmation and closure, and that’s a major part of the book. 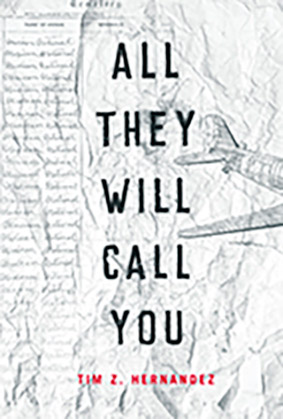 Hernandez located one of them still living in Jocotepec, and chapter four of his book describes his meeting with her in January 2015.

For Casimira Navarro López, time would knock on her door sixty-seven years later, almost to the day. Until this moment, she had never been asked to speak about her boyfriend, who was killed in “the worst airplane disaster in California’s history.”

She paused, and it was clear that she could see herself in her mind as a young woman. The light of her best years had not yet dimmed, despite the eclipse that was January 28, 1948, a time when her only concern was being a young woman in love with a young man. The remembering made it palpable. The mere mention of his name elicited a long silence.

Upon hearing it, Casimira folded her trembling hands across her lap, and the corners of her mouth could not decide whether to lift or hang. They lifted. It was clear she’d been waiting her whole life to speak of him, though at times it must have seemed easier to live out her days without ever thinking back at all. A droplet gathered at the outside corner of her eye. She gingerly pressed the pad of her thumb against the skin to collect it.

For many, this well-researched story of forced deportation and tragedy and heartbreak will seem as relevant as today’s headlines from the United States. Hernandez brings it to life with his diligent research and eloquent writing, examining what happened, trying to steer clear of politics, and facilitating closure the best he can.

His insights into the hopes and dreams of all aboard – the 28 migrant farm workers, the pilot and his pregnant wife (subbing for a stewardess who called in sick), the co-pilot, and immigration agent – are uplifting. The way Hernandez describes the fear of passengers who saw the left engine catch fire and explode is harrowing. His images of some passengers ejected after the left wing tore off and hurled them to their death still strapped in their seats may torment your sleep tonight.

The mass funeral description in the book is devastating:

The crowd gathered around the caskets. Twenty-eight of them. What was inside each casket would never be seen. By anyone. Mismatched or not, the severed arms, fingers, torsos, and heads of Ramón, Guadalupe, Juan, Luis, young Tomás, María, and the rest of the passengers were gathered up and stuffed into black plastic bags and placed inside the caskets.

Because there weren’t nearly enough body parts to fill all twenty-eight caskets, some of them would remain completely empty. Empty caskets interred before the crowd. The twenty-eight boxes a mere representation of twenty-eight lives. As a way to identify the caskets, they would be labeled A to Z. The human beings, however, would go unidentified for sixty-five more years.

Eventually, over the years, victims were identified, but names were as mangled as the bits and pieces of bodies found at the crash scene. Hernandez was able to locate families of seven victims. The poignant meetings, after decades of not knowing for certain what happened to family members or loved ones, helped ease their pain.

A video glimpse of Hernandez’s visit to Jocotepec to help bring closure to Casimira Navarro López is on YouTube at https://www.youtube.com/watch?v=PkES7xkcvaQ.

Woody Guthrie wrote a poem protesting the injustice of identifying only the four victims of the crash who were U.S. citizens, and not identifying the 28 deportees. It became a haunting and legendary folk song: “Plane Wreck at Los Gatos (Deportee).” That’s also on YouTube, at https://www.youtube.com/watch?v=d9mbn3o1LZ0.

“All They Will Call You” is available for order from Guadalajara’s Sandi Bookstore, Av. Tepeyac 718, ISBN 978-0816534845, as well as through Amazon in hardcover and Kindle.