“Empire of Borders: The Expansion of the US Border Around the World” by Todd Miller. Verso: London/New York, 2019. 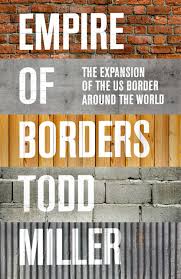 To those who read the news in June this year, it appeared that U.S. President Donald Trump persuaded the Mexican government to tighten up its southern border with Guatemala after being threatened with punitive tariffs. In fact, the threat was mostly hot air. The border had already been reinforced, not only by thousands of Mexican soldiers and hundreds of new border police, but also by technology, weapons, and U.S. State Department and Homeland Security “advisors.” In addition, on the Guatemalan side of the border, a special task force had been created, with U.S. support, for border guard training, equipment and surveillance.

According to investigative journalist Todd Miller in his new book, “The Expansion of the US Border Around the World,” the U.S. Department of Defense had already provided Black Hawk military helicopters and armed assault vehicles. In addition, “other U.S. investments have included backscatter X-ray vans … funds for facility construction, patrol boats, communication equipment and maritime sensors … the U.S. has also supplied K-9 units …”

The point of all this aid to our southern neighbors was not to help the people of Nicaragua, El Salvador and Honduras, who are still staggering under the centuries-old weight of historical exploitation, of proxy wars waged by the United States, as well as global warming, which has destroyed crops, and NAFTA policies, which have decimated small businesses.

Not at all. The point of all this was and is to prevent them from passing through Guatemala to Mexico, where they might have a remote opportunity to ask for refugee status.

No matter that they are fleeing violence and death from deported members of U.S. prison gangs in El Salvador, or a repressive government in Honduras as the result of a coup supported by the U.S. State Department.

No matter. The goal is to force them back into these areas from which they are fleeing for their lives and for those of their children. They have no “rights,” U.S. officials assure their subservient allies, since once they left their homeland they became “stateless” with no protections under any constitution.

Forget basic human rights, which were once considered “inalienable” and derived from a Higher Power, according to Thomas Jefferson and the U.S. founding fathers. These migrants are less than human, and the rules of basic human rights and social justice no longer apply. It is a question of “security.” The goal is to prevent migrants from the undeveloped southern countries from ever reaching the developed north. (The deprivation of constitutional protections also applies to those travelers with passports, as journalists have discovered when their cellphones or laptops are confiscated and they are refused admission if they fail to give up their password.)

According to Miller, the United States, in cooperation with Israel, has created a “global building machine” and the goal is to create “border sets” throughout the world. These consist in part of a complex series of visa requirements, pre-boarding airport checks, train and bus interdictions and document checks, land barriers and river patrols, high tech surveillance, walls and fences. The primary purpose is not to prevent smuggling or international crime. That is a mere tangential benefit. The main goal is to keep people without resources locked into adversity, poverty, and even repressive regimes, while the privileged one percent are free to travel all over the world, including to dozens of countries without any visa requirements at all.

Milton Friedman wrote that the “hidden hand of the market will not work without the hidden fist.” The result is that the developed nation-states, with the United States and Israel in the lead, have become “global bouncers for capitalism.” When NAFTA went into effect, taking away the protections for Mexican and Central American farmers and small businesses, many countries including Honduras and Mexico went from being net exporters of corn to importers, because the U.S. corn was subsidized and sold cheaply, flooding the market.  Mining corporations looking for rich profits with lower labor costs and lax environment restrictions, went to Mexico poisoning the rivers, tearing up the landscape and polluting the air.  The opening of big box stores such as Walmart drove small family-owned groceries out of business. A Holiday Inn displaced an entire fishing community. Coca-Cola took over the water resources in Oaxaca, not only for soda but for their bottled water, Ciel. Over a million farmers were driven out by the changes and another million and a half Mexicans dependent on the farm economy were suddenly without jobs. Now, as they migrate in search of work to replace the jobs they have lost, and the land that the corporations have destroyed, they are dubbed illegal, abused, herded like cattle, and incarcerated along with their children.

Miller says that the nation state has become the policeman for the corporate world, to clear the landscape for those in the world for whom borders do not exist, that is, the one percent. But it is not only on the Mexican border that this is taking pace. It is literally Global North versus Global South throughout the world.,with United States-supported ¨border sets” in Kenya, Jordan, Morocco, Canada and Belize, with surveillance and imaging equipment provided by U.S. firms such as Raytheon and Israeli films such as Photuro and Mantis Vision, funded by U.S. taxpayers.

Barbara Tuchman in her classic “March of Folly” reminds her readers of the persistent folly of the Trojan horse, the so-called gift that infects the society. Trump and others would have us believe that it is the influx of immigrants who will destroy the United States from within. (“They´re bringing drugs. They’re bringing crime. They’re rapists.”) But we have had immigration, both legal and illegal, for centuries. It made the nation stronger, not weaker.

The real likelihood is that the Trojan horse is something we let into our country rather recently and saw as a genuine gift. It is the military-corporate-security monolith which has integrated itself into every aspect of our lives. And its true goal is not to protect us, the ordinary citizen, and enlarge our lives. It is to propagate its power, increase its profits, and surround its territories, as medieval lords did their castles, with moats that the ordinary folks cannot cross. This is the Trojan horse we have allowed into our republic. Its name is oligarchy. Its guise is security and economic growth, and its goal is global corporate dominance. The sad truth is that it can continue to exist only by limitless economic expansion while controlling the movement of the mass consumers. It is ultimately unsustainable. As Edward Abbey once warned, “Growth for growth’s sake is the etiology of the cancer cell, and its ultimate result is the death of the host.”

Michael Hogan is the author of 24 books, including “Abraham Lincoln and Mexico” and the “Irish Soldiers of Mexico.” He is a former professor of international relations at the Autonomous University of Guadalajara, and Emeritus Chair of Humanities at the American School Foundation of Guadalajara.