She’s a beautiful pale-skinned and red-haired “Tapatia” called Marisol Medrano. Although he looks Mexican and his name is Gustavo Pena Verplancken, he’s of Belgian origin.

She’s a child psychologist; he’s a computer software developer. But together the couple represent Totol – one of only two wineries in the border city of Tijuana.

Gustavo and Marisol’s love affair with wine began in 2009, when out of curiosity they visited the El Guateque festival in Ensenada. This yearly event showcases wines made by students from the school run by Hugo d’Acosta, one of Mexico’s foremost winemakers and consultants.

They decided to enroll in courses at the famous winemaking school (known as La Escuelita) and in 2009 bought 500 kilograms of Cabernet Sauvignon – the most studied grape variety – and one 225-liter barrel.

The couple were thrilled by their first harvest and marched on with their hobby, buying one ton of  Zinfandel and another barrel the following year. In 2011, they experimented with a difficult French variety called Mourvedre (also known as Monastrel or Mataro) and in 2012 vinified it themselves. “We chose Mourvedre as we both like the wines of the Spanish Jumilla and this is the only red grape grown there,” Marisol says. 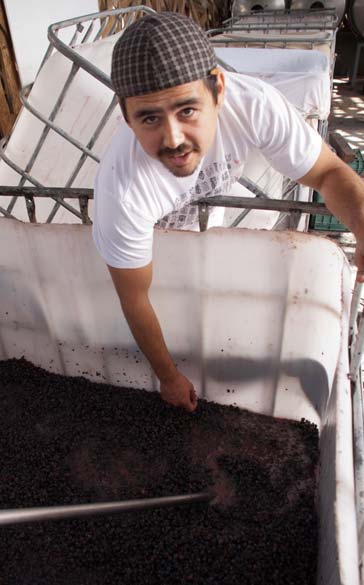 By 2014 the couple had released Totol’s three actual labels that are now available on the market (see details below). 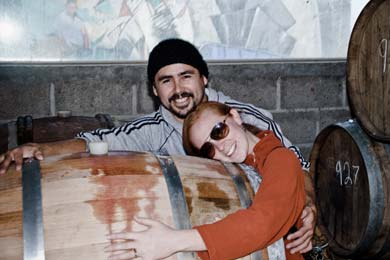 Plans for 2015 are to reach a volume of 1,200 cases of wine (one barrel equals 50 cases). They are purchasing some new stainless steel vats and other machinery, while finishing a winemaking facility built inside a hill in Tijuana, so as to use the natural cooling effect of the earth.

“We buy the grapes from Ensenada (the wine capital of Baja California),” explains Marisol. “We can’t make the wine there due to our daily jobs in Tijuana and San Diego, so we bring the grapes here. It’s only a two-hour drive.”

Gustavo’s thirst for knowledge – and maybe his Belgian genes – prompted him to start making beer in 2010.

“Brewing beer helps a lot in understanding wine production,” he reasons. “I make beer once a week and the wine is made once a year, so I fine-tune my winemaking techniques on barley and hops.” The total production is up to 200 gallons per month, all of it sold locally in Tijuana, the unofficial artisanal beer capital of Mexico. Gustavo soon plans to raise production up to 600 gallons a month.

Apart from local distribution in the two million-strong “emigrant city,” the wine is exported to the United States (San Diego, La Joya and Los Angeles) and the states of Jalisco, Veracruz, San Luis Potosi, Puebla and Guanajuato, as well as the D.F. (Mexico City).

Now they’ve learned the nuts and bolts of brewing and winemaking, the couple have decided to diversify their production, adding a rosé, a white wine and also grappa – a distillate from the grape mash. There are also plans to bake bread from the grains that are used for the beer.

“Beer, wine and gourmet tourism, especially from the United States, is fast growing in the area and we want to make a larger offer to our tasting room visitors,” Gustavo says.

The “Totols” are regular visitors to Guadalajara, often participating at winemaking dinners at venues around the city. Marisol has always considered herself a “Tapatia” – her father was born here and her mother’s family moved to the city when the latter was six.

Although Marisol was brought up in Tijuana, she spent most of her summer holidays in Guadalajara.  “On the way back,” she recalls, “my sister and I always carried three suitcases – one full of birrotes (the salted bread used for tortas ahogadas) and two of frijoles, as my father always considered the frijol to be nonexistent in Baja California.”

Marisol still has her favorite Guadalajara treats and places, such as Manhattan ice-cream sticks and the popular taco stand at the corner of Tepeyac and Niño Obrero, where she says they make “the best tacos in the world.”

I asked Marisol whether her uncle, a Frenchman who owns the Chez Nené restaurant on the corner of Juan Palomar and Inglaterra, sells her wine.

“O-la-la!” she exclaims. “He’s French to the tips of his toes and sells only French wines, as for him other wines do not exist. But we are starting to talk about it. We had a meeting with him last time we were in Guadalajara and he tasted our wines at least!”

With their business growing each year, would it not behoove the couple to concentrate  full-time on wine and beer production?

“It’s our current jobs that keep our expensive hobbies going,” Gustavo admits. “The production is still very small and boutique-like from a commercial point of view.”

And even though the “kid-replacement” hobby grew into a successful micro-business over six years, the couple have adopted two children: Valentina in 2010 and Lucas in 2013.

“Making wine is really like raising kids,” Gustavo says. “They come from the same parents – the vineyards – but are different every year and it’s curious to watch them develop with age.”

Totol Etiqueta Negra 2013 (91/100) A blend of 80-percent Mourvedre and 20 percent Cabernet Sauvignon. The fruit comes from Guadalupe Valley. Jacaranda and blackberries in the nose, flower perfumes and vanilla hints, mouth watering acidity, elegant structure and good fruitiness. A “tamed” classic Mourvedre for the connoisseurs, a young thoroughbred racer ready to run. Pair with duck or cured meat such as cecina.

Totol Zinfandel 2013 (90/100) Dried blackberries, sweet cherries, slightly oaky but balanced and elegant. The same style follows up in the mouth with firm but not disturbing structure and fresh acidity. Pair with all kinds of meat, pastas with ragu sauce or even pizza. Some bottles of the 2010 (96/100) and 2011 (94/100) harvests are still available (only at the winery), the Zin shows incredibly deep development, with notes of dry leaves, raspberries, tobacco, smoke and earthy notes, a style very close to the best aged Pinot Noirs of California.

Totol wines are available from tienda.vinisfera.com, shipments in Guadalajara and the outskirts, price range 355-400 pesos.