Nothing fogs up the windscreen of the critical faculties like having within arm’s reach an eight-foot-tall tree (fake, but made of real wood) jutting up from the center of your table, decorated all over with small plastic bottles of Patron tequila.

Even less conducive to forming a clear-eyed appraisal of a restaurant’s pluses and minuses is having a stream of un-aged agave spirit etch a path down your esophagus vis-à-vis a burnished steel luge wielded by a giggling waitress.

Amidst a constant barrage of comically gratuitous pleasures such as these - and taking place in an atmosphere of visually arresting opulence which is itself a constant, if pleasurable distraction — weighing a restaurant’s worthiness seems a bit supercilious. This writer hesitates to look gift horses in a mouth,  especially when they reek of mid-shelf tequila. However, now that the review is underway, there’s no turning back.

Lest you think the aforementioned extravagances await everyone who comes to dines within the pedals of the strange and dazzling hot house flower that is Tlaquepaque restaurant Casa Luna, we hasten to inform that the writer enjoyed these boozy gimmicks by virtue of being an invitee to a lunch on the dime of the Patron Tequila company; were it the restaurant’s modus operandi to regularly dispense such luxuries, they’d have quickly gone bankrupt. 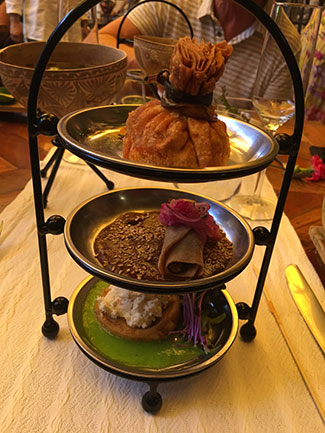 The choice of the lunch’s location was in line, it’s assumed, with the company’s apparent habit of dazzling guests into a state of besotted submission. Casa Luna, situated a block from Tlaquepaque’s main plaza on the handsome, tourist-gouging pedestrian thoroughfare Calle Independencia, might be best described as the feverish hallucination of a globe-trotting Upper East Side heiress suffering from a massive over-dose of LSD; a swirling visual feast that looks painstakingly curated and ruinously expensive.

The beauty of its interior is un-deniable.  In fact, many of the objets d’art displayed in the spacious dining room are for sale, the restaurant being essentially of a piece with the large, horseshoe-shaped boutique that hugs the restaurant on three sides.

The man responsible for this over-the-top sensory cornucopia is David Luna, a Paris-educated designer who co-owns Casa Luna with partner Enrique Ruiz. The two men opened the restaurant and adjoining craft shop in the immediate wake of the financial crisis which hit Mexico in 2011. Rising from the ashes of a previous gustatory venture called Adobe, Casa Luna was conceived not only as a destination for fine-dining level cuisine and service, but also as a showcase for Luna’s work in a variety of design/sculpture mediums, including glass, wood, metal, and ceramic.

Competing as it had to with a wacky slalom of Patron tequila-featuring libations (chilled shots, room temperature shots, a batch of delicious cocktails crafted by bar manager Yolanda Ruiz, the aforementioned luge), the food nonetheless made a good showing, the dishes mindfully crafted and well balanced. Executive Chef Marco Iglesias is the man responsible for the food, although Ruiz and Luna involve themselves with the plating, in line with the establishment’s hyper-arranged character. Glibly described, the cuisine may be said to have a foundation in a number of Mexico’s culinary regions, accented by an international brush stroke here and there. A stand out was a tiny sope (a thick disk of maize dough with raised edges) sitting in a large spoonful of salsa verde and topped with crumbly cotija cheese. 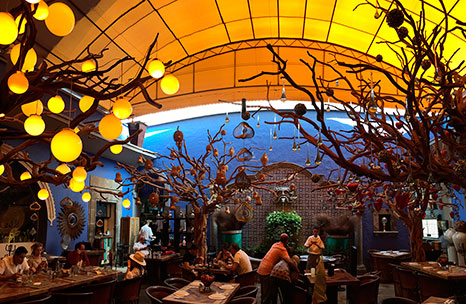 Casa Luna is the rare restaurant that is popular with both tourists and locals. The former, according to Ruiz, tend to dine there at night, the latter (invariably well-heeled) during the day. Ruiz attributes the restaurant’s success mainly to word of mouth, although a search for “Tlaquepaque restaurant” will inevitably result in Casa Luna”appearing just shy of or right at first place on lists compiled by Google, Yelp, Trip Advisor, etc.

A caveat, however. As is often the case with restaurants who budget generously for atmosphere and location, it’s a fool who inflates his expectations of the fare’s quality in proportion to its cost.  But you won’t leave feeling suckered either, like you might at San Francisco’s ocean-side restaurant Cliff House, say, or at any number of Roman restaurants whose proximity to the Coliseum may tempt the bored, gastronomically-uninspired diner to bean a tour guide in the head with a deep-fried artichoke.

The business Luna and Ruiz have built is a juggling act of hospitality, the objects in the air being the attempted titillation of three sensory organs: the eyes, the tongue and the ears (they offer live music ranging from jazz to mariachi throughout the week, day and night). In the main, they manage the act gracefully, even if optical pleasure is paramount, something neither of the owners would likely have any interest in denying.