Drive out west of Ajijic past Villa Lucerna until you come to a huge sign that says, “Mangia.” It’s on the mountain side. And you can’t miss it — it could be the name of an Italian Food Court.

It serves as a bold welcome sign for a new restaurant, La Ceiba, just east of the sign with a bold menu that features some of the most exotic dishes (none Italian) that you’ll find at Lakeside. La Ceiba (pronounced Say-bah), is a Central American tree, considered the most sacred among the Mayans. The diverse menu gifts you with several exotic offerings that are unexpected, such as ostrich, buffalo and wild pig, all surprisingly presented as hamburgers. These are offerings inspired by the world of the Mayans, particularly from South and Central American countries. Overall, the menu goes pretty deep in terms of tastes and gastronomic whims. 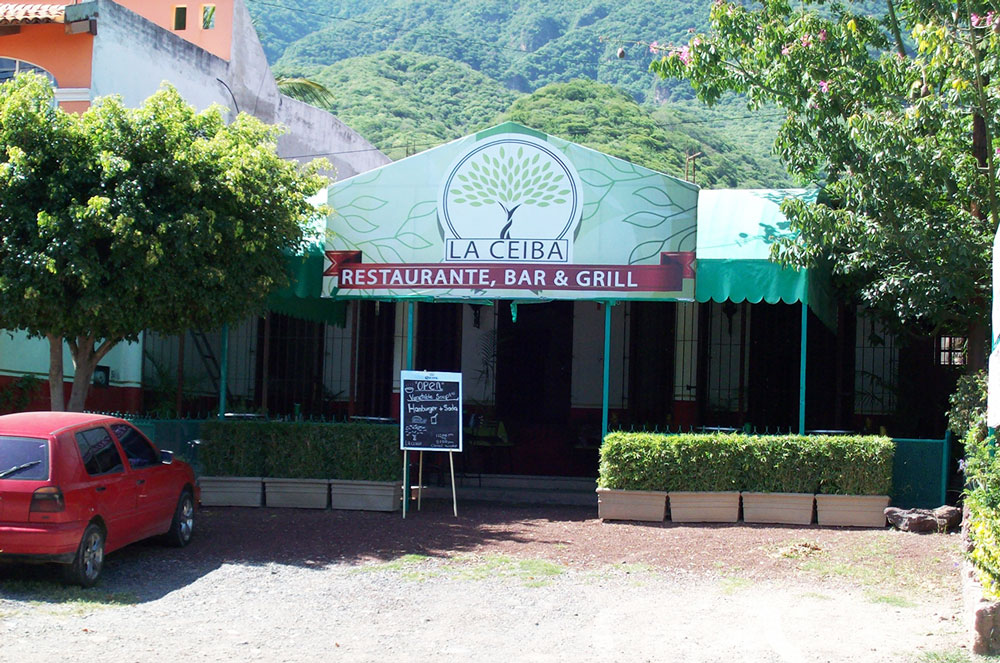 As hard as I fought against it, I conceded that you cannot go by a restaurant offering ostrich in any form and pass it up. The ostrich item actually created a brief table discussion over the dignity of such a dinner. But the discussion ended with the acknowledgment that, after all, it’s still poultry, even though the creature is six inches taller than you are.

My guest and I decided to order a bit of the exotic and a bit of the local. So, with the substantial ostrich burger, we also ordered an Azteca soup and a plate of tempura vegetables to share.

The choice of ostrich burger sides featured a variety of rice, french fries, roasted or mashed potatoes, sautéed baby potatoes, wedges of freshly cooked sweet potato, all accompanied with vegetables. The waiter assured me that the ostrich meat content was 100% ground and seasoned ostrich breast with no filler. This was borne out immediately on my first bite. Unlike everything else that is said to taste like chicken (but which isn’t actually chicken), the ostrich burger did not taste like chicken. It was dense and meaty, much like a beef steak or even venison. Halfway through, I decided to pack it up for another meal the next day.

The tempura vegetables seemed to expand the definition of tempura into something richer and spicier, again with a Hispanic accent on the popular Japanese gossamer batter—slightly thicker and more toasted than tempura.

The Azteca soup can serve as a small meal onto itself, with a sauce base as thick as a dip and as intense as chili— clearly one of the most luxurious soups I’ve had here at Lakeside.

More standard fare offered at this restaurant includes a selection of generous shrimp dishes, salmon, several beef cuts, chicken breast and even a turkey dish, most accompanied by a fresh salad.

The service was delivered with a grand display of pleased-to-be-of-help gratitude. Our dinner for two, including four glasses of fine Argentinian wine, two appetizers and the dazzling wild ostrich meat sandwich and chips came in at just over 450 pesos.

So, the run west to La Ceiba is well worth it. The restaurant is spacious, permitting quite a bit of privacy per table, no matter how loud you choose to speak or how romantic your whispers. What is wanting is more atmosphere—for a restaurant appealing to eccentric tastes, it needs a more eccentric ambiance.