I doubt even contemporary dance naysayers could fail to be mesmerized by the inventiveness and physical versatility of British dancer and choreographer Aakash Odedra, whose double bill of “Murmur” and “Inked” opened the Festival Cultural de Mayo at Guadalajara’s Teatro Degollado last weekend.

In Inked, inspired by his fascination for his grandmother’s tattoos and the impact of her death, Odedra daubs his body with black smearings – marks of identity and belonging – that eventually spread out across the stage in broad illuminated patterns, while he transforms from a primitive, crouching life form into a lithe, spinning and free human being.

In Mumur, Odedra explores his own experience of dyslexia through a blend of dance, music and light.  Using digital imagery and devices to underscore his struggle with letters, words and books, Odedra finds his means of expression through movement.  Reams of paper stream down from the heavens and whirl around amid jolting electronic sounds and visual confusion, as Odedra tries to overcome his isolation from the world via the language of dance.  It’s an absorbing solo performance that relies on cutting-edge theatrical technology timed to perfection.

The two works are very personal journeys, Odedra told me after the second of his two Guadalajara performances. Born in Birmingham, England, the fifth generation of immigrants from India, Odedra explained his predilection of always seeking to expand ways of thinking about dance.  He acknowledged the work of his collaborators –  Ars Electronica and co-choreographers Lewis Major and Damien Jalet – in putting together his stories in such a unique way.  “I’m appreciative that people respond to work that means so much to me,” he said of the ovations he received from Degollado audiences at both of his shows.

May Festival founder and director Sergio Matos agreed that the one-artist performance was an audacious choice to open the annual May Festival – in the past often kicked off with a major orchestral or ballet company work. “It was time to make a change,” he said. “And it serves as a harbinger of what’s to come in the festival.” 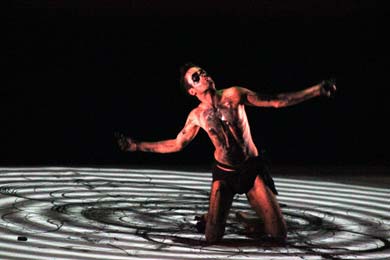 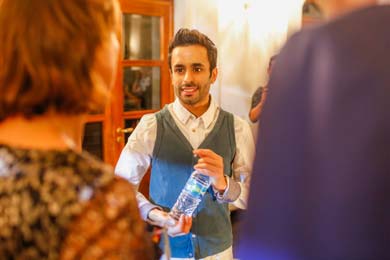 Upcoming performances at the Degollado for the rest of the month mostly showcase artists from the festival’s guest nation, the United Kingdom, whose cultural community is recognized worldwide for its enthusiasm for innovation.

For Tapatios who had only seen the lackluster posters and were not in the know,

the early Sunday evening presentation for children (and adults) given by the Classic Buskers and Neil Henry might have been perceived as a somewhat run-of-the-mill music and magic show.   But Michael Copley, Ian Moore and Henry are skilled performers, and not only play for unpredictable laughs, but cleverly introduce their young audiences to a wide range of classical music with a high degree of virtuosity.

The musical association of the original “Cambridge Buskers” began when 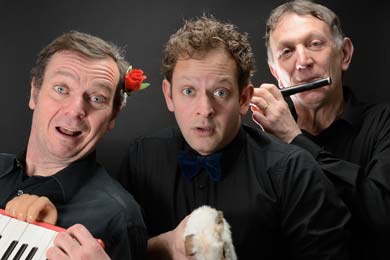 Coply and Moore’s predecessor, David Ingram, found themselves at a London train station without enough money for the fare home. To raise the funds, they played “The Entertainer” and “Eine kleine Nachtmusik” for passers-by before they were moved on.   While no doubt meticulously stage managed and crafted, the Classic Buskers’ routines manage to maintain that improvised feel, with Copley effortlessly switching between woodwind instruments at rapid speed, showing his expertise on recorders, flutes, panpipes, crumhorns, ocarinas, a Pico Pipe and even a rubber trout.  With Moore on the accordion, the musicians interpret a dozen esteemed musical works, including “Don Giovanni” and “Swan Lake,” while the expressive Henry orchestrates the humor with a slew of slick visual gags, amusing interactions with his colleagues and impressive magic tricks, the most spectacular being the finale, when dressed in a bee costume – for “Flight of the Bumblebee” by Rimsky-Korsakov – he disappears inside a huge balloon which is finally “pricked” by Moore in an hilarious ending to Tchaikovsky’s “1812 Overture.”

Although the theater was only three-quarters full for a show presented at an accessible price (150 pesos), the audience quickly connected with these seasoned performers, helped by an opening routine in which Henry selected “volunteers” from the audience who were given offbeat wind instruments to play in a funny collaboration of Strauss’ “The Blue Danube.”  At the end, after three encores, the audience seemed to concur that it had been a well-spent 90 minutes of their time.

The May Festival continues with performances by two more acclaimed modern dance companies, plus works by British composers interpreted by the City of London Sinfonia.  The jamboree closes May 31 with a performance by the Jalisco Philharmonic Orchestra of Sir William Walton’s score from the 1944 Oscar-winning movie “Henry V” (starring Laurence Olivier), conducted by Garry Walker, the director of the Edinburgh Youth Orchestra, and featuring the Jalisco State Choir.