Guadalajara’s very own popular beer has made its “official” debut in the United States under the moniker “Estrella Jalisco.”

Estrella, a light-flavored pilsner, was first produced in the early 20th century by Guadalajara’s Cervecería Estrella, acquired by Grupo Modelo in 1954. 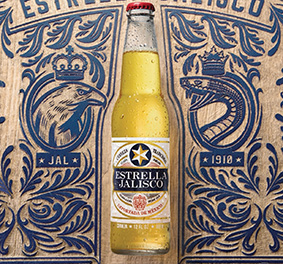 Estrella’s red, blue and yellow label is a nod to the flag of this state, and the crest on its packaging is inspired by the coat of arms of Guadalajara, he noted.

Estrella Jalisco will continue to be brewed in Guadalajara and will first be made available in California, Colorado, Illinois, New Mexico, Nevada, New York, Oregon, Texas, Utah and Washington.

“Many Mexican and Mexican-Americans have roots in Jalisco, and we’re excited to reunite them with the beer that they – or their relatives –could previously only enjoy in Mexico,” said Inda Meza.