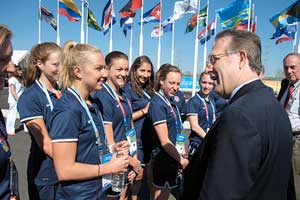 Wayne led  the U.S. presidential delegation at the October 14 ceremony and subsequently viewed the early heats of the swimming competition. He also visited the Pan American athletes village, where he greeted five-time Olympic synchronized swimming champion Teresa Edwards, who was recently named chef de mission of the U.S. national team to the 2012 Summer Olympic Games in London.

Speaking at ITESO, Wayne praised the support provided by the program to local start-ups, several of which are selling to U.S. companies.

“Such support for innovation is essential for development in a high-tech economy,” he said.  “The work being done at all of the companies in the Guadalajara metropolitan zone shows what can happen when you have a good combination of investment and commitment to a certain task – creating jobs, building infrastructure, and creating the brand name of Guadalajara.”

With support from state and federal governments, ITESO recently inaugurated a second incubator facility that will enable the program to provide key consulting services for up to 100 new businesses in sectors such as electronic design, software development, and medical devices.

In a meeting with leaders of several local business groupings, including the American Chamber of Commerce, Wayne discussed business and trade issues, education and the impacts of immigration and the security situation on economic growth in the region.

Wayne underscored the importance of education and job creation, noting that work force development and training is essential to economic growth, and that a connection between the private sector and universities can increase Mexico’s competitiveness in the global economy.