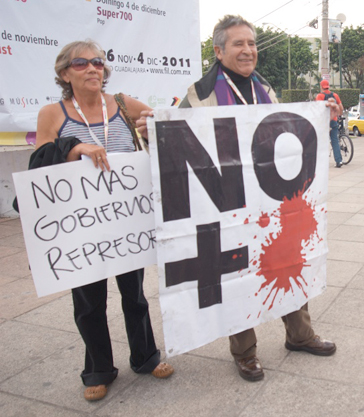 The victims, ten of whom had been reported missing to authorities, were seized and executed in the days leading up to November 24, when their bodies were deposited  in three vans beside the bright yellow Arcos de Milenio. The site could have been chosen as a reference to the Milenio cartel, from which sprang La Resistencia, one of several criminal organizations vying for control of the city.

Various media outlets reported that the victims had been beaten, strangled, and shot in the head, with one of the corpses decapitated, while a threatening message was left with the bodies attributing the killings to Los Zetas.

Of the 26 bodies, 21 have so far been identified. They include 15 Guadalajara residents, two from Zapopan, three from Aguascalientes and one from Guanajuato. Six had criminal records: three for drug offenses and others for theft, fraud and damage to property.

The victims included a removal van driver, a laborer, a department store employee, a fruit seller, a pizza boy and the owner of a hamburger stall. The authorities have not yet determined whether they belonged to a criminal gang.

There was further violence in Guadalajara last Sunday, with six people murdered across the city in less than 21 hours, in cases believed to be linked to organized crime. The recent upturn in violence has also raised concerns about levels of impunity in Jalisco, where seven of every ten homicides never receive an official inquest.

Jalisco has averaged 90 murders per month this year, 53 percent of which were slayings linked to organized crime. The number of these execution-style killings in the state has risen by 3,000 percent from 2007 to October 2011.

In response to last week’s violence, Guadalajara Major Aristoteles Sandoval called for the return of the “security columns” which kept the city safe during the games.

“We cannot wait for more tragic incidents,” said Sandoval, urging greater coordination to ensure “that the police units in every municipality are working together, patrolling, protecting and strengthening security.”

Cardinal Juan Sandoval Iñiguez went further, calling for the Mexican Army to be deployed on Guadalajara’s streets: “If only they were here, I hope they come to liberate us.”

But Emilio Alvarez Icaza, a member of the peace movement headed by poet-turned-activist Javier Sicilia, said a greater police presence on Guadalajara’s streets would not make the city safer. This situation “requires investigation, intelligence and action against the causes” of the problem, Alvarez affirmed.

Protestors carrying the “No más sangre” (no more bloodshed) placards that have been adopted by peace activists up and down the country gathered this week outside the International Book Fair (FIL) at the Expo Guadalajara, just a few blocks from where the 26 bodies were dumped.

“The FIL is an international forum with a worldwide level of influence,” said Alfredo Menchaca, coordinator of the 28 de Mayo human rights group, explaining their presence at the event. “It is important that the world knows the climate of violence that Mexico is experiencing.”

The recent outbreaks of violence in Jalisco did not come as a shock to analysts of Mexico’s drug wars. Security expert Sam Logan, of U.S. think tank Southern Pulse, predicted a rise in violence in Guadalajara back on September 30.

The city “appears to be the next battleground between the Sinaloa Federation and Los Zetas,” he affirmed, having noted a series of armed confrontations between the two cartels in Chapala and Jardines del Bosque in the preceding months.

Logan foresaw a period of calm during the Pan American Games due to the heightened security measures, but warned that “when the games end, a large-scale criminal offensive could take shape from the beginning of November.”

The Sinaloa Cartel, headed by fugitive billionaire Joaquin “Chapo” Guzman, is believed to have initiated the conflict with the Zetas over the summer, when its Guadalajara-based allies the New Generation Jalisco Cartel (CJNG) dispatched a group called the “Matazetas,” (Zeta Killers) to wipe out their rivals in Veracruz.

The Matazetas released videos of masked gunmen promising to hunt down the Zetas in Veracruz and on September 20 dumped 35 corpses of alleged Zetas on a busy road in broad daylight.

In retaliation the Zetas have been moving westwards across the country into areas considered territory of the Sinaloa Cartel. This includes Guadalajara, which was controlled by Guzman’s ally Ignacio “Nacho” Coronel until he was killed in a shootout with federal police in July 2010.

The subsequent power vacuum has contributed to the current sense of anarchy, with the CJNG fighting against La Resistencia for control of the city. Despite originally struggling against the Zetas, the latter cartel is now believed to have formed an alliance with them against the Sinaloa Federation.