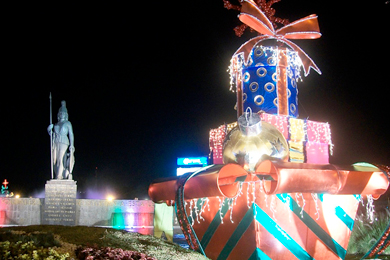 Despite reports of underwhelming sales, holiday cheer has taken root in Guadalajara as Tapatios gear up for another festive season.

Lights spelling out the obligatory “Feliz Navidad” have been spread out across the huge building facing the Metropolitan Cathedral, while on Tuesday afternoon workers in the Plaza de la Liberacion were putting the finishing touches on a larger-than-life nativity scene to be officially unveiled later that evening. This is the 54th year that the Nacimiento Monumental, as it is known, has been installed in the plaza.

A massive artificial Christmas tree has also been erected beside the Degollado Theater. Standing a good 50 feet high, the tree is sponsored by Coca Cola, the official patron of Christmas – or so one might believe given the prominence of the company’s festive advertising. Excessive marketing is the only blight on Guadalajara’s decorations, with the giant presents and piñatas installed beside the Minerva glorieta also boldly accompanied by the not so eye-pleasing logos of corporate sponsors. 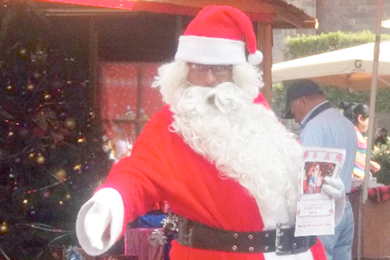 Elsewhere, sales have been a little slower than usual this year, such as on Calle Obregon, just south of San Juan de Dios in the historic center, which is normally bustling with Christmas shoppers looking to pick up imported goods at bargain prices.

“Around 40 percent of the toys were made in Mexico, with the other 60 percent mostly imported from China,” said Sandy, who has been selling toys there since the beginning of November.

Sales have been slow so far, she noted, although she expects them to pick up in the next two weeks, especially once more workers have been paid their annual Christmas bonuses.

Even those who dress up as Santa Claus are having a hard time at present.

“We’re losing the tradition a little because families think we’re going to charge them even if their children just come up to us,” said Fidel, in front of his grotto. (Few Tapatios, however, seemed enthusiastic this week about helping Santa’s bank balance by having their children be photographed with him in the grotto.)

But at another popular Christmas market, on Alcalde and San Felipe, business – on the surface  at least – appeared to be booming. Soundtracked by inescapable Christmas carols hellishly rendered in the style of polyphonic ringtones, shoppers ambled around, picking up nativity figures, tinsel, gingerbread, toy reindeers and plastic, illuminated Father Christmases.

But here too, sales have dropped compared with the same period last year. “We’ve sold a little less than normal because a lot of people spent their money during the Pan American Games,” said Maria Espinoza Franco. “Plus the economic crisis has affected everyone.”

For the likes of Espinoza, who maintains her stall every year from November 1 until Christmas Eve, and whose family spend all year making the nativity figures, a drop in sales can have serious repercussions. Yet it does not seem to show, as she happily continues her work, clearly blessed with the true Christmas spirit.