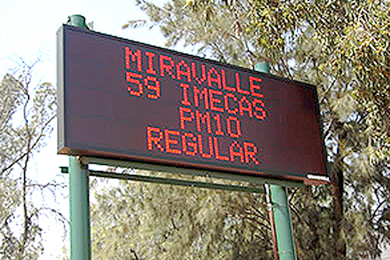 Residents of Guadalajara should refrain from outdoor exercise between 7 a.m. and 11 a.m. due to early morning seasonal thermal inversions, says David Parra, director of the city’s air quality monitoring service.

As the year turns, the city is prone to thermal inversions, which occur when cold air and any pollution in the air get trapped below a blanket of warm air.

This build up of smog – mostly ozone and other pollutants that are harmful to human health – can trigger state Environment Agency (Semades) air quality alerts.

On its website, Semades warns that  air pollution levels over 100 IMECAS may provoke symptoms in people (especially children and the elderly) with respiratory or cardiovascular conditions.

Semades enacts Phase One of its  emergency alert if a monitoring station records a level higher than 150 IMECAS for more than two continuous hours.

If levels exceed 150 IMECAS, residents of the metro area are advised not to use their vehicles unless absolutely necessary, stay indoors and keep their windows closed.

Contamination in Guadalajara has been slightly worse than last year, with 145 days of IMECAS registered above 100 compared with 109 in 2010. Around 90 percent of the air pollution in  Guadalajara is caused by motor vehicles.

The University of Guadalajara’s Meteorology Institute has predicted a “dry and cold winter.”

Winds tend to pick up in February and March and air quality readings start to improve. They will start to rise again during the hot, dry months of April, May and June.

For up-to-the-moment information on Guadalajara’s air quality, go to http://siga.jalisco.gob.mx/ramasp/ramag.

This week, Semades unveiled a new strategic plan designed to significantly improve air quality throughout Jalisco over the next nine years.

Under the title ProAire Jalisco, the ambitious aim of the project is to halve the number of dangerous contaminants in the atmosphere of the state’s urban areas.

The plan was developed with the participation of 100 experts from the public, academic and private sectors, under the watchful eye of the federal Environment Agency (Semarnat).

Among specific actions earmarked for 2012 are greater enforcement of the somewhat ineffective vehicle emissions testing program, the relocation of contaminating cottage industries (in particular, rustic brick-making operations that burn tires to fire kilns), the further modernization of Guadalajara’s  air quality monitoring system and the development of sustainable transport systems.