Two weeks ago, I covered the Traditional Mariachi Festival and was impressed by its participants’ adherence to an older – and less popular – tradition of mariachi. 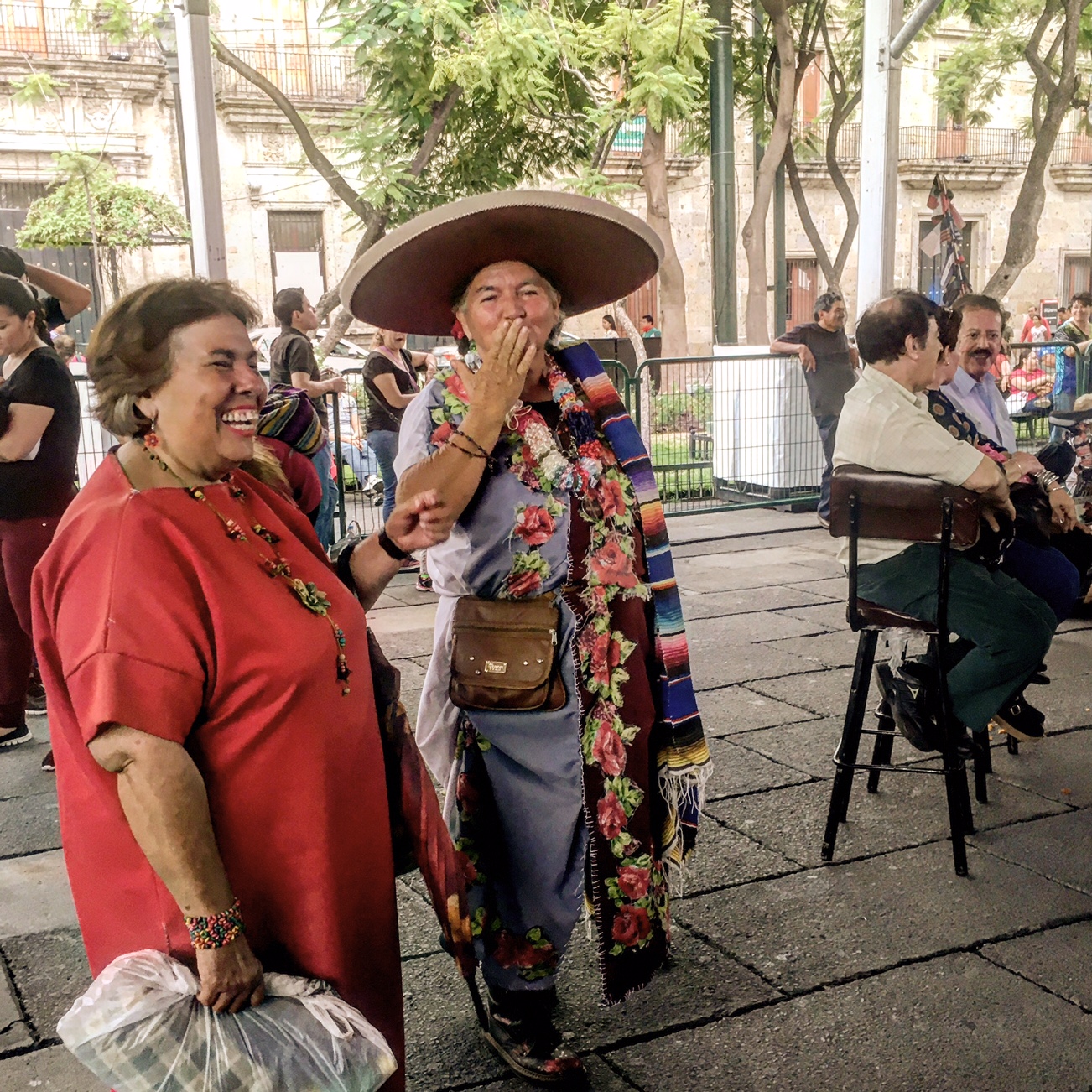 And because I’m a journalist dedicated to giving all perspectives their day in court, I faithfully covered the subsequent festival, the International Festival of Mariachi and Charreria – but only the free events so as to maintain my allegiance with the hoi polloi.

Fortunately, and to the organizers’ credit, there were plenty of free concerts to choose from over the course of the ten-day festival.  What follows is a short montage of memorable moments from the week wrested from my mind’s beat-up camcorder and applied to paper.

The sun was shining down on Guadalajara’s Plaza de Liberacion at 4 p.m. on Friday, August 25th, but numerous puddles reflecting its rays back up into the sky and into the eyes of pedestrians dodging them on the way to a large covered staged set up in front of Teatro Degollado attested to the warm summer deluge which had drenched Guadalajara and left her wet and gleaming earlier that morning.

The concert stage, however, was well-protected against the threat of continued showers, and nothing short of hell cracking open in the centro historico was going to stop the mothership of the world’s premier mariachi festival from awakening with the blast of trumpets, the deep plong of the guitarron and the bee-swarm sawing of horsehair bows.

From Friday, August 25 to Friday September 1, the aforementioned stage, whose cover sheltered against the possibility of precipitation not only the performers and crew but also several acres of folding chairs set out for the comfort of spectators, paid host to the festival’s workhorse and crown jewel, the gloriously, democratically and entirely gratis Pabellon Cultural.

Being an “international” mariachi festival, it came as a pleasant surprise but not a shock that the honor of opening the festival’s inaugural concert went to a group not from Jalisco, where mariachi was born, but from Arequipa, Peru.

Reina de Guadalupe is a 10-piece band from Peru’s second largest city.  Somewhat unusually, 90 percent of the group is female, leaving the remaining 10 percent to be occupied by a male trumpet player, one of three members holding down that instrument.  Charismatic bandleader and vihuela player Lizbeth provided her strong high alto for the majority of the selections, with occasional assistance from her peanut gallery of backing musicians.

As much as church leaders may decry idolatry, Sunday’s event in the cathedral following Friday’s kick-off concert seemed to indicate their having resigned themselves to the quasi-religious devotion to mariachi evinced by the citizens of Jalisco.   At the stroke of noon, a squad of men in close-fitting raiment of grey embroidered in bright white whorls let loose with a blast of music next to the broad apse, the clarion of trumpets and wobbly buzz of violins vibrating the thick, pungent myrrh haze hovering over the pious throng.

Back in front of Teatro Degollado Tuesday, a phalanx of grey-suited men sporting giant white hats backed up Omar “el Caporal” Vega, who had clothed his medium build in grey pants with stripes down the outer thigh, a high-waisted burnt umber jacket, and a jaunty cravat.

Vega, his voice like dark mahogany coated in honey, opened with a song extolling the emblematic virtues of Jalisco, chief among which, at least for the purpose of the song, was mariachi.   The band – also the house band for the Tequila Express enterprise – strummed, plucked, bowed and blasted out a rich tiramisu over what sounded, at least to this writer, like a tourist brochure adapted especially for the band, perhaps by the city’s own artistically-inclined mayor.

Bringing the week-long Pabellon concert series to a satisfyingly close was Mayela Orozco, a Guanajuato native of impressive vocal power, endurance and precision. Bathed in stage light which made her tight violet outfit glow with a molten intensity, she cut a semi-divine figure as she belted out number after number, alternating tales of yearning and heartbreak with up-tempo barn burnings.   Her band, an army of men and one stout woman on the violin, were an extremely able lot – and a cheerful one as well, a welcome change from the diffident stares worn by many of the week’s backup performers.

It’s hard not to admire the traditionalists’ starchy adherence to a simple, spartan, trumpet-less iteration of mariachi.  But on the other hand, witnessing the outsized sensory overload of a modern (i.e., post 1930s) mariachi spectacle over the course of a week - and how deliriously happy it makes concertgoers, especially when it costs nothing – the thrill is undeniable.  A tip of my hat to the traditionalists for their stolid integrity … and a full doff to the practitioners of modern mariachi in all its glorious excess, long may it pummel its audience into blissful submission.