Despite the opposition of local residents and environmentalists, work has started on a major new cultural and commercial complex on the city’s northern beltway (periferico). 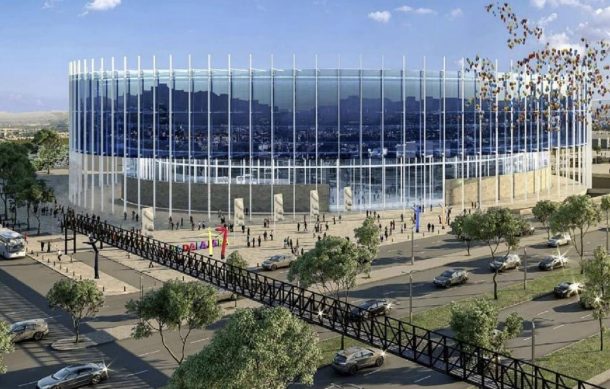 Located in the Huentitan zone near the city zoo, the centerpiece of the complex will be the Arena Guadalajara, a 75,000-square-meter performance venue with seating for 20,000 spectators.  Once completed — provisionally next year — it will become the nation’s second largest closed venue, after its namesake, the Arena Mexico, in Mexico City.

The arena and surrounding complex is set to become the new site of the annual state fair, the Fiestas de Octubre, which currently takes place each fall in the Benito Juarez Auditorium.

A 20-year concession to build and operate the arena has been awarded to Grupo Súper Espectáculo, in which Guillermo Eduardo Salinas Pliego, the owner of TV Azteca and one of Mexico’s wealthiest men, is reportedly a major stakeholder.

The project includes the rehabilitation of an 11-hectare area surrounding the event hall, which will eventually house the multiple recreational and commercial activities of the Fiestas de Octubre and also serve as a “park.” Curiously, municipal authorities have named this area the “Bosque Cultural Huentitan,” presumably to counter opposition from locals and environmentalists who believe the entire development will seriously damage the equilibrium of the zone.

This part of the Huentitan neighborhood  has been a target for developers ever since the old planetarium closed on the site more than a decade ago. Plans for various real estate and cultural projects have come and gone, all failing to meet the scrutiny of opponents, who argue a good case that the area – abundant in flora and fauna – serves as a protective “green” buffer” between the nearby Huentitan Canyon and the start of the urban sprawl.  Neighbors say development in the zone has reached its limit and is not only creating an ecological imbalance but severely straining local resources.

Despite the organized resistance, the project has moved ahead rapidly since the start of the year, with Guadalajara Mayor Ismael del Toro and Jalisco Governor Enrique Alfaro — both members of the Citizens Movement party — fully supportive and on the same page.

As work on the arena started last month, Del Toro brushed off suggestions that some 1,000 trees will be cut down to build the event hall, noting that permission has been granted to fell just 280.  This week, he countered assertions from the neighborhood opposition group, Únete Huentitán, that they had managed to obtain a court order to halt construction. Work is continuing legally, he stressed on April 6.