Authorities are looking for a 29-year-old U.S. citizen, a recent graduate of the Autonomous University of Guadalajara (UAG) medical school, who is reported missing after his friend was shot to death in Colonia Providenica in the early hours of Sunday, June 16. 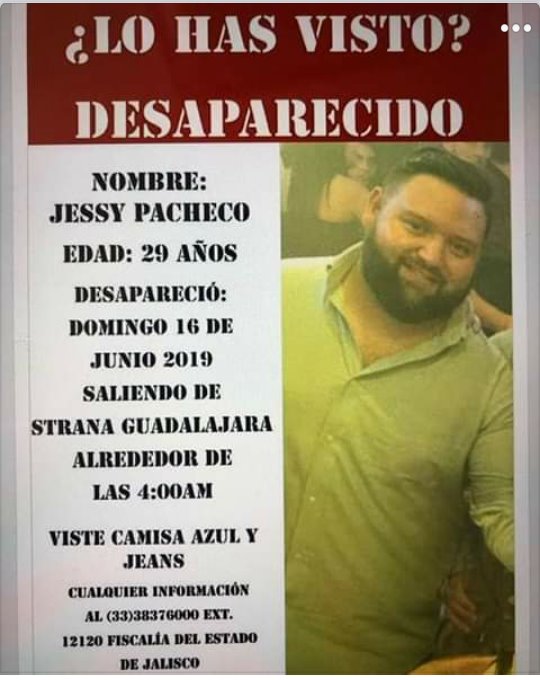 According to reports, Jesse Pacheco went to the Strana night club located at the corner of Pablo Neruda and Terrenova to celebrate his graduation along with a group of other students, including close friend Carlos Alejandro Delgadillo Romero, a dual U.S.-Mexican citizen who was born in California.

Witnesses say Pacheco and Delgadillo were the last to leave the club at around 4 a.m. While Pacheco waited for an Uber, Delgadillo went to a convenience store to buy cigarettes.  According to a store employee, several unidentified persons in a red vehicle parked near the store gunned down Delgadillo just after he left the store.  Police reports said five shots were fired with an AK-47.

Family members fear that Pacheco may have been abducted and are desperate for any news of his whereabouts. He was due to return Tuesday to his home in Fort Smith, Arkansas, where he hoped to start his medical career.

Some reports suggest that the group of UAG students became involved in an altercation as they celebrated in the night club, although this has not been substantiated.

Pacheco was last seen wearing a blue shirt and jeans. Call the Fiscalia del Estado de Jalisco with any information at (33) 3837-6000, ext. 12120, with information on his whereabouts.