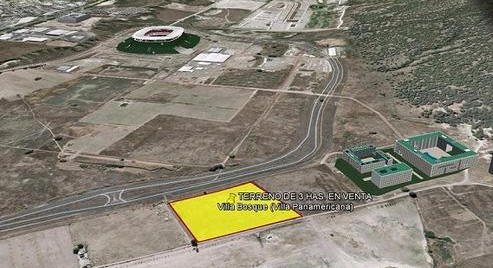 Alfaro announced Wednesday that the area in which the complex is located, known as El Bajio – on the western perimeter of Guadalajara next to the Primavera Forest –  will be designated a Zona de Recuperación Ambiental (Environmental Recuperation Zone), meaning that no further development will be permitted there.

“This is a strategic zone,” Alfaro said via social media. “No longer will we allow private interests to damage Guadalajara’s environmental capital due to an irresponsible or corrupt governor.”

Governor Emilio Gonzalez (2007-2013) green-lighted the construction of the Villas in 2009 as Guadalajara’s Pan American Games deadline closed in.  A lawsuit claiming he acted dishonestly during this process is currently stalled in the courts.  Other suits filed by neighbors and civil associations pertaining to the “illegal” construction of the Villas are also pending.

In total, the new protected area covers 980 hectares, of which 350 are already urbanized. In addition to the abandoned Villas Panamericanas (16 hectares), the zone houses the Akron Stadium (home to the Guadalajara Chivas), a university and some housing.

Various NGOs, environmental activist groups and neighborhood associations have denounced the proposed sale of the Villas to a private consortium that intends to redevelop the site into 1,500 residential apartments. They argue the complex should be demolished, as it presents a real threat to the ecological integrity of the nearby Primavera Forest, often referred to as “Guadalajara’s lung.”

Alfaro said he has no authority to invalidate permits authorized more than ten years ago for the Villas to be used for residential housing. He previously said he is reluctantly pushing ahead with the sale, since the primary investor in the complex is the State Workers Pension Fund, and to take any other course could affect the financial futures of thousands of people.

While the announcement to protect El Bajio from future development may be seen as positive step by many citizens, it is unlikely to end the growing chorus of opposition to the redevelopment of the Villas. Meanwhile, Universidad de Guadalajara researcher Arturo Glesson said the new designation means nothing without a proper scientific and technical proposal to guarantee the zone’s integrity.