A group of medical students from the Universidad Autonoma de Guadalajara have been running a clinic for poor folks in a run-down section of Guadalajara for almost two years.

The charge for their services is usually no more than ten pesos, including drugs and lab tests, and the clinic is packed full every night.

Headed by a practicing doctor, the student president of the 12-member group of both Mexican and U.S. third- or fourth-year students, is a medical student from Arizona, who is in charge of the overall running of the clinic.

“Working here has affected each one of us,” said a Mexican-American med student from Texas. “It will be hard for anyone who has worked here to only be concerned with a booming money-oriented practice. You realize how much you can do to help people who really need it.”

In the 1960s and 1970s, the Mexican Army played a critical part in maintaining domestic order, but its role as a policeman has been sharply reduced over the last four years. However, in the Independence Day parade in Mexico City this past September 16, some 8,000 soldiers dressed in sharp new combat uniforms, sporting cocky green, red and blue berets, ran in disciplined ranks, followed by hundreds of newly-painted military vehicles, many carrying rockets new to Mexico’s arsenal.

Military experts both here and abroad contend that alarm is uncalled for. They argue that those among Mexico’s political ranks who are apprehensive about the military’s ambitions are simply not knowledgeable concerning the Army’s true makeup. With nearly 70 million people, Mexico has one of the smallest and most poorly equipped military forces of any country of its size.

Of Mexico’s 73-billion-dollar national budget, defense spending accounts for only 1.1 percent. Many of its aircraft, tanks and warships are WWII vintage. “Some of this equipment is actually valuable as museum pieces,” remarked one foreign observer.

More than 300 members of the American Society of Jalisco (Amsoc) elected a new slate of officers, during a chaotic general assembly held at Guadalajara’s Holiday Inn. In one of the most controversial and hard-fought campaigns in the organization’s 45-year history, Amsoc Hospitality Committee Chairwoman Peggie Pickhardt, by a 156 to 142 vote, narrowly defeated Charles Hoskin for the office of president. Hoskin served two terms as Amsoc president, 1977-1979.

The assembly was marked by overcrowding in the voting hall, alleged unorthodox voting procedures, and shouting matches between members of opposing camps.

The race for the presidency featured two candidates with contrasting styles and agendas, with Pickhardt favored by those who looked for little change in the organization and Hoskin backed by those looking for a more aggressive social calendar.

Four years ago, the only women found in the Guadalajara Fire Department were typing memos and serving lunch, says Victoria Ramirez Torres. Ramirez changed all that when she entered the department as a paramedic, the first female to eat, train, and sleep within the corps of about 300 firemen at the station on Calle Campesino.

“When I first came in, they [firemen] gave me some difficulties,” says the 27-year-old mother of a 10-month-old daughter. “They didn’t accept that I could be working alongside them for 24 hours.

Three more 20-something women joined the corps in the last three years. “Things were different for us because we’re not alone like she was, says Elizabeth Lomeli Perez. Lomeli says she understands the initial reaction to them was not all positive. “The men were used to conducting themselves in a certain way — their manner of conversation — they’ve had to make a gradual change.”

Now that these four young paramedics have earned their rightful places in the department’s ambulance service, Ramirez is undergoing additional training to become the first female firefighter in Guadalajara. 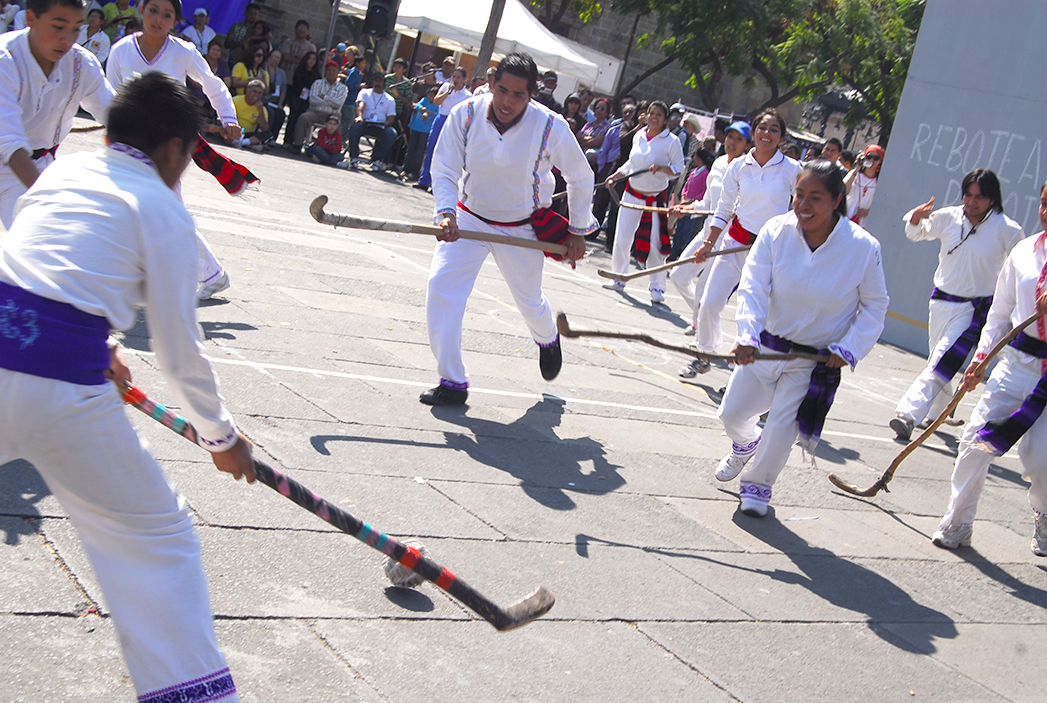 The group of men, women and children making their way along the Revolution Day parade route demonstrating some 70 traditional Mexican sports were dressed in indigenous garb and shimmied around with obscure sticks and other odd implements.

The group were in town for the 13th Annual National Meeting of Indigenous and Native Sports, an increasingly popular event showcasing little-known ancient sports.

For four days, the 400 participants – 80 percent of them children – took part in exhibition games and gave workshops in the Plaza de la Liberacion in the center of Guadalajara. They came from 16 states and were mainly made up of people from indigenous communities.

“The aim is to encourage the growth of these sports,” says Carlos Hernandez, president of the newly-formed Jalisco association for traditional and native sports. “Our own cultural values are often ridiculed.”

Hernandez compares the decline of indigenous Mexican sports to the lack of appreciation for traditional crafts: “Kids don’t want to carry on the traditions of their fathers and grandfathers.”

What immediately stands out is the sheer amount of indigenous games that exist, which at times can be confusing. Even the game of pelota, which most foreigners who have studied Mexico’s pre-Hispanic history will know, may well not have been played like the history books tell us. Instead of trying to get a ball through a hoop (not so unlike a basketball hoop) with their hips, there are many alternative versions of the game.

Explains Hernandez: “Some play with sticks, some with the forearm and some with the hips. But the president of Yucatan’s commission has studied the subject and believes the Mayan game was played with forearms.”

In Jalisco, there is evidence that Meso-America’s biggest ball court, at 100 meters long, was situated in Teuchitlan, Jalisco. With that in mind, Juan Carlos Pulido has created Club Guachimontones, a team of youngsters that practice near the ruins of Teuchitlan and seek to reclaim their forefathers’ game.