June 14 is Flag Day. This marks the day in 1777 when the stars-and-stripes version of the flag was declared our country’s official symbol over other flags used by revolutionary militias.

Flag Day is observed in some U.S. cities, and is an official state holiday in Pennsylvania. The intent of this unofficial federal holiday is to “carry out a program of a patriotic order, praying for the success of the Federal arms, and the preservation of the Union.”

But June 14 is also known as Flag Burning Day. Across the country, U.S. citizens choose to burn the American flag in protest on this day — their right under the First Amendment of the Constitution. 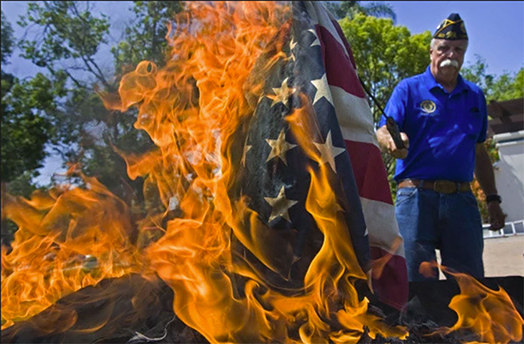 Also, American Legion Posts and other patriotic civic organizations collect tattered, worn and torn flags and burn them during a solemn ceremony at this time of year.

At a number of points in our recent history, there have been movements to pass an amendment to the Constitution prohibiting the burning of the U.S. flag. One of the closest near-misses was in 2003-2004, when the House passed a prohibition bill; it was later struck down in the Senate by only three votes.

Even Supreme Court Justice Antonin Scalia, a famously conservative wielder of the gavel, voted down a statutory ban on flag burning; Scalia found himself unable to defy the cornerstone principle of the First Amendment, by which he found himself “handcuffed.”