A four-day happening revolving around earth-friendly practices, sustainable energy alternatives and the battle against climate change will take place Thursday, May 30 through Sunday, June 2 at Chapala’s waterfront Malecón in the framework of Expo Internacional de Prácticas y Energías Sustentables. 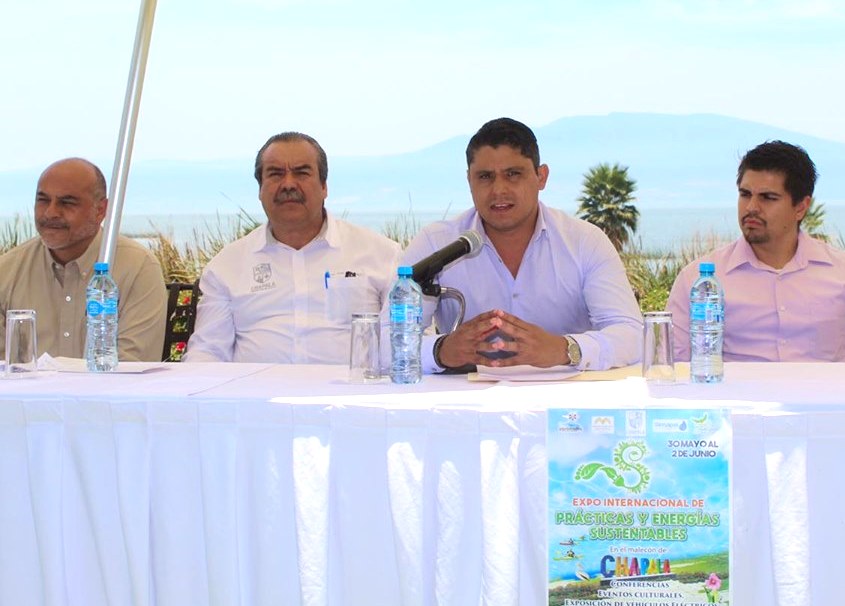 The event will be open to the public free of charge, running from 10 a.m. to 8 p.m. daily.

Introducing plans for the event at a May 15 press conference, Chapala Mayor Moisés Anaya explained that the aim is to raise public awareness on the global and local threats of climate change.

“It is the opportune moment to implement public policies and encourage citizens to do their part. There will be terrible consequences if we do not take action now,” he declared, pointing to extreme temperatures, droughts, natural disasters and human catastrophes looming on the horizon.

Saying it is time for people to change their mental chips, Anaya spoke of the new paradigms being followed in his administration.

“Our infrastructure projects include planting trees to be cared for by the citizenry so that streets will be filled with greenery rather than sterile slabs of rock and concrete.”

The mayor also mentioned that his administration is breaking the mold with the installation of solar energy systems in government buildings and promotions to reduce the use of disposable inorganic products. He also wants to develop recycling and encourage non-motorized transport.

Organized by the municipal ecology department, Instituto Tecnológico Mario Molina Campus Chapala (ITMM) and the Intermunicipal Association for Environmental Protection and Sustainable Development (Aipromades), the innovative expo will feature workshops and conferences on water conservation, composting and other ecological themes; sporting, recreational and cultural activities; and give-aways of trees and plants to revive the community’s natural landscape.

The expo’s commercial exhibits will feature entrepreneurs showcasing different types of hybrid and electric autos, scooters and bicycles; solar energy products and services; handicrafts made from recycled materials; and organic produce and artisanal foods produced in the lakeshore region.

Visitors will be asked to sign a petition seeking changes in federal legislation to outlaw the outmoded practice of burning agricultural fields, a common cause of wildfires that are devastating vast expanses of forestland across Mexico this year.

ITMM Director Luis Eduardo Jiménez Herrera said students and teaching staff will set up a pavilion at the event in which they will use modern technology to create a virtual time travel experience of Lake Chapala’s ecosystem.

Some of the Tec students have developed an application for projecting 3D images of flora and fauna, highlighting their roles in the local environment. Others designed a video depicting the lake’s evolving changes from past to present and into the potential future. The last module will introduce practices that individuals can follow to contribute to protecting and conserving planet earth.

A team of 45 students will guide local school groups through the pavilion on Thursday and Friday by pre-arranged appointment, and the general public on Saturday and Sunday. Each tour will last approximately 20 minutes.