The environmental problems plaguing Lake Chapala and its watershed are serious, but can be improved and controlled through coordinated efforts involving government entities, academic institutions and community inhabitants, according to two of the world’s leading experts on lake management issues.

Professors Masahisa Nakamura of Shiga University, Japan, and Walter Rast of Texas State University were in Jalisco last week to make presentations at a conference titled “Lakes of the World: Lessons for Chapala.” Sessions were held Friday, July 26 in Guadalajara and Saturday, July 27 in Ajijic. 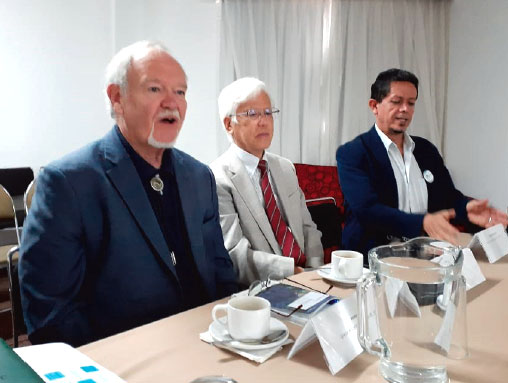 The distinguished research scientists are colleagues affiliated with the International Lake Environment Committee (ILEC), headquartered on the shores of Lake Biwa, known as Japan’s “mother lake.” ILEC is a non-government institution that promotes an integral management approach for the conservation of lake catchment areas.

During both conferences, Nakamura and Rast shared their experiences – as applicable to Lake Chapala – in battling pollution from sewage, fertilizers and pesticides, the extinction of native flora and fauna, deforestation, silting and invasion of tributary and shoreline federal zones.

Rast stressed that the best way to restore a lake is to go to the source of the problem. For example, tracing and controlling pollutants generated upstream rather than focusing solely on contamination in the body of water itself.

Speaking on model cases, Nakamura referred to efforts to conserve Lake Biwa – the largest freshwater lake in Japan, located northeast of Kyoto – that began in the 1980s and continue today. The interaction and collaboration of all stakeholders is vital to achieving success, he explained.

The two scholars had become familiar with Lake Chapala issues on previous journeys to the region. This trip was hosted by Alejandro Juárez Aguilar, executive director of Instituto Corazón de la Tierra, who has been closely associated with ILEC since 2006. He now sits with Nakamura and Rast on the organization’s scientific committee. Juárez is also spearheading the Bosques-Agua-Gente program aimed at cooperative local governance of the micro-watersheds that feed into Lake Chapala from lakeshore communities.

The experts’ visit was a forerunner to the 18th World Lake Conference, to be held in Guanajuato in October 2020, under the joint sponsorship of ILEC and the University of Guanajuato.