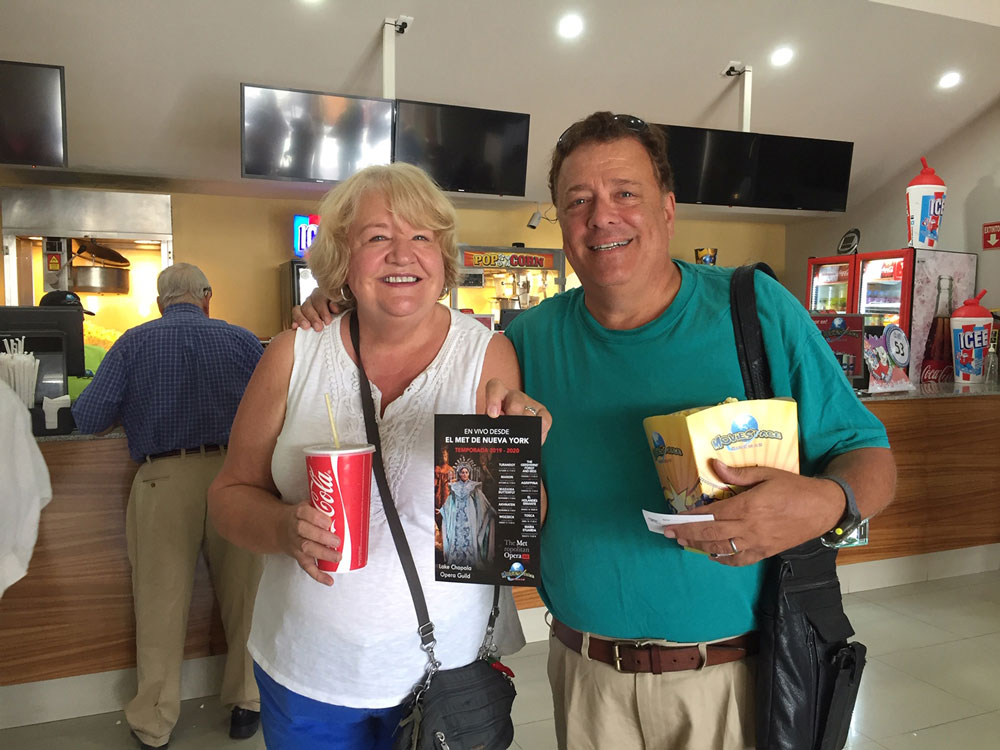 “It was a smashing success. From the size of the crowd at intermissions there appeared to be well over 200 attendees,” Willis said.

The Met Live series is transmitted in high-definition video via satellite from the Metropolitan Opera in New York City to select venues, primarily movie theaters, in the United States and other parts of the world.

For the inaugural transmission of Puccini’s “Turandot,” MovieSpace in Ajijic provided screenings in two theaters with English subtitles, and one with Spanish subtitles.

Attendees at the Saturday screenings were appreciative of the chance to see world-class opera on their doorstep.

“Bloody marvelous” was how Rosemary Keeling described the Guild’s move to link up with MovieSpace.

For many years, John and Rosemary Keeling had taken lakeside residents to Guadalajara for Met HD Live performances at the Teatro Diana through Viva La Musica, the organization they ran for more than a decade before it closed last year.

Area newcomers Deborah Williams and James Martin said they had always wanted to go to HD Live screenings in Denver, Colorado but “never had the time.” They are thrilled to have the option now they are retired in Ajijic.

Opera buffs Carl and Trish Richards, who had previously gone to Guadalajara to see the transmission, said they were “very happy to avoid the drive.”

Doug, from Chicago, was last in line to get tickets and was worried they might sell out before he could see his “third favorite opera.”

Some 90 people showed up at MovieSpace Cinemas on the day of the show to buy tickets.

Willis noted that although there are areas for improvement, members of the Guild were impressed by the team effort of their MovieSpace partners to make the first Met Live performance a success.

MovieSpace is handling all ticket sales seven days per week between 3 and 10 p.m. More than 40 season tickets for the opera season have been sold to date.

“As the Guild is underwriting more than 290,000 pesos in Met transmission and equipment costs, it is critical that individual and business sponsors consider a variety of financial options available and payable on our website,” Willis said. “We are off to a positive start with about 107,000 pesos committed to date in memberships and sponsors.”