A five-year-old pitbull named Luna met a bloody demise in the violent climax of a longstanding dispute between neighbors in Chapala’s Plaza de Toros barrio, reported around 11 p.m. on Thursday, November 22. 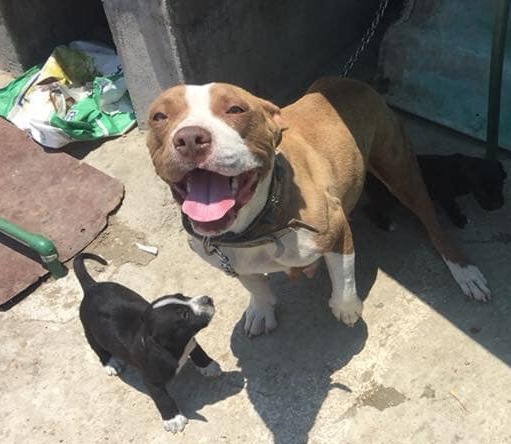 Luna succumbed to wounds inflicted by a resident of Calle Emiliano Zapata identified by local authorities as Tomás “N” who reportedly stepped outside his home and hacked the dog to death with a machete or other bladed object.

The attack was apparently provoked by the pitbull’s recurrent habit of snarling and snapping at a smaller dog kept behind the gate of the assailant’s house while, while the pitbull ran free from its home two doors away.

The incident was reported to local police, who arrived at the scene, detained the suspect, and hauled him away to police headquarters. Municipal Judge Guillermo Hernández Sanabria was called in to interview Luna’s owner and the dog’s presumed killer.

The judge told the Guadalajara Reporter that both parties acknowledged they had been in conflict on prior occasions when Luna had rushed to the neighbor’s home displaying aggressive behavior.  Surveillance videos later presented by the suspect’s family show the pitbull on different dates as it barked furiously outside the gate, at least once grabbing the little dog’s head in its jaws until the owner appeared to pry it free and drag it away.

Hernández referred the case to the Ministerio Público (public prosecutor’s office) where the parties involved appeared to give their statements in the matter. He believes that the state authorities were unable to forge a settlement between the two principals.  Tomás “N” was subsequently released from custody, presumably because police did not catch him in the act of committing a crime.

Stirred by the uproar that immediately went viral on social media, on Friday morning Chapala Ecology Director José Jaime and a group of animal rights advocates joined Luna’s  owner at the Ministerio Público to present a formal criminal complaint based on Jalisco’s Animal Protection law and Penal Code. A state forensic team was then led to the spot where Luna was buried, retrieving the corpse for autopsy.

Jaime indicated that prosecution of the case may be hampered because local police, who are not well versed on laws regarding animal abuse, did not properly protect the crime scene. They also allowed removal of the dog’s body and failed to collect the weapon with which it was killed