The bit of political vaudeville known as “La Niña Bien,” a music video in which a “Good Girl” – code, in Mexico, for a rich but somewhat gauche young woman – proclaims her intention to vote for leftist presidential candidate Andres Manuel Lopez Obrador (AMLO), has been distracting a susceptible Mexican public for almost a week. 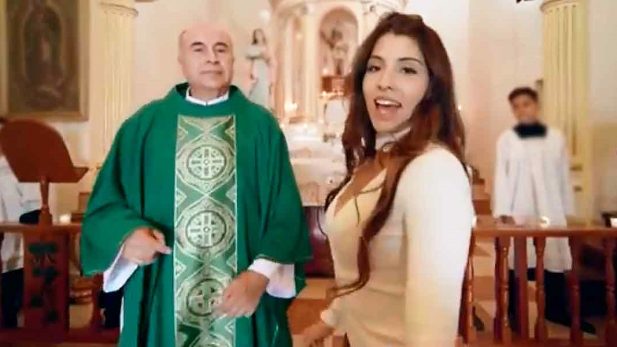 Sunday, March 18, “Niña Bien” was published on the social media profiles of one Almudena Ortiz Monasterio, uder the pretense that she was a studnent who had shot the video as part of a school project for ITESO, the Jesuit University of Guadalajara.

Both Obrador, his political party Morena and the Jesuits themselves fervently deny any connection between them and the video, which begins with Ortiz driving an expensive car to the sound of cheap, canned reggaeton.  The scene changes abruptly to the young women – dressed all in chaste white – sitting in a church pew, surrounding by praying churchgoers.  The pious quickly gives way to the mildly risqué when Ortiz shakes her hair loose of its bindings and starts twerking in the aisles and batting her lashes flirtatiously at the priest, who leers at her while placing a communion wafer in her mouth.  All the while, Ortiz extols – in a breathy, girlish voice – her affection and support for the grey-haired politician, even saying she would “swipe right” on a hypothetical Obrador Tinder profile.

The video subsequently cuts between Ortiz in sports bra and tights working out in the gym; shots of her, the priest and other parishioners dancing next to the church altar; and back to Ortiz, in front of the aforementioned automobile, gyrating wildly as if her life depended on it.

However, it turns out that Ortiz is, in fact, a fictional construct.  The true identify of the protagonist is Paulina Laborie, an actress and fitness trainer, a hired hand.  The question is, who hired her and produced the video?

Jorge Triana of the conservative PAN party says he has an idea. He claims he has definitive proof the video is the work of Obrador’s Morena party. But his assertion, already suspect for emanating from a member of a diametrically opposed rival, is laughable at best due to the fact that it was Triana himself who tweeted out Laborie’s identity.

While it may seem trifling, the controversial video could conceivably affect the Obrador campaign. Mexico – and Jalisco in particular, the video’s locale – is a land of the god-fearing and devout. The bogus work is seen by some believers as disrespectful toward the church.

Morena has vociferously denied any involvement, saying that “we do not share the [video’s] ideas, nor the vulgar way they are expressed.”

The statement continued by saying that the song was just another salvo in a war of “dirty politics” by an utterly unscrupulous opposition.

Whoever produced the video, the fact remains that Obrador currently maintains a healthy lead in the polls. (He also, however, enjoyed a significant lead against Felipe Calderon during the 2006 campaign, which eventually saw him lose to his opponent.)