The yearly “Via Crucis” (stations of the cross) migrant caravan, whose participants are mainly comprised of citizens from Honduras, Guatemala and El Salvador seeking asylum in Mexico and/or the United States, has received unlikely publicity from the world’s most powerful person, U.S. President Donald Trump.

In a series of – what else – tweets, the former mogul lambasted the Mexican government for not forcibly dealing with migration over its borders, claiming it represents a security threat to the United States.

“Mexico is doing very little, if not NOTHING, at stopping people from flowing into Mexico through their Southern Border, and then into the U.S.” tweeted Trump with his characteristic erudition.  “They laugh at our dumb immigration laws. They must stop the big drug and people flows, or I will stop their cash cow, NAFTA. NEED WALL!”

The yearly caravan is organized by Pueblo Sin Fronteras, a non-profit group which has been advocating for the rights of migrants for over 15 years.  Its chief organizer, Irenio Mujica, has indicated that the caravan, which consists of about 1,100, will only go as far as the city of Puebla, where there will be a migrant rights symposium.   She added that after said meeting, members are free to continue on to Mexico City, where claims of asylum are most effectively made.

Part of the impetus behind the annual Via Cruces march is to draw attention to the plight of those who enter Mexico seeking asylum; thousands of Central Americans traveling in Mexico have been the victim of kidnapping, forced labor (including prostitution), rape, and murder over the years. 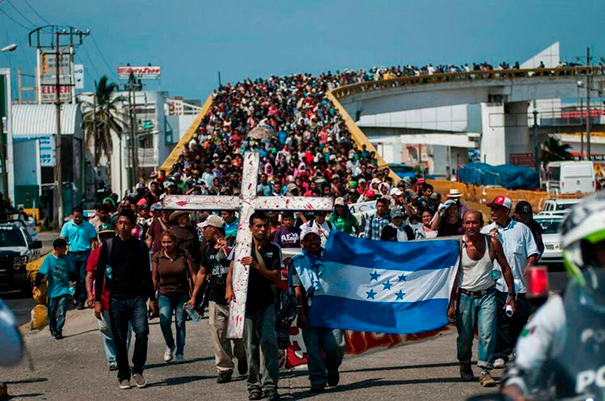 A quick glance at Mexico’s immigration laws reveal that Trump’s emphatic electronic missives may have been sent prior to his being properly informed of Mexico’s policies towards the undocumented.  According to a Mexican official, the caravans are sanctioned because, in Mexico, migrants have the right to seek asylum inside the country, or barring that, apply for a visa allowing them to travel to the U.S./Mexican border, where they can then request entry into the United States.

Trump may also be unaware that Mexico detains and deports thousands of Central Americans every year, equal or greater than those repatriated by the United States.  Last year, 76,433 were deported, while about 3,000 were granted asylum.

Meanwhile, candidates in the upcoming Mexican presidential campaign – a politically diverse gang including leftist frontrunner Andres Manuel Lopez Obrador and tied-for-second politicians Ricardo Anaya and Antonio Meade – have made slamming Trump a key part of their respective platforms, a stratagem greatly facilitated by the president’s renewed corrosive attacks against his neighbor to the south.

“Neither Mexico nor its people will be the piñata of any foreign government,” said Lopez Obrador during a speech in Ciudad Juarez. “Let this be heard near and far: neither security issues nor social problems can be resolved with walls.”

Anaya, for his part, turned Trump’s rhetoric on its head, pointing to ways that issues north of the border have effected security in Mexico.

At the time of publication, the Via Crucis caravan had stopped in Matias Romero, a town in Oaxaca through which passes La Bestia, the freight train migrants often use to move north.