Even though he is reckoned to have pilfered more than $US3 billion from state coffers, Javier Duarte, the former governor of the state of Veracruz, will only spend three more years in jail for his misdeeds. 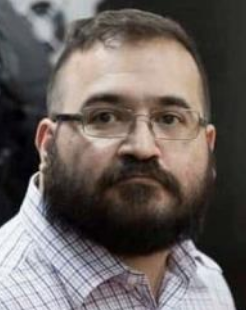 A federal judge this week found Javier Duarte, 45, guilty of money laundering and criminal association and sentenced him to nine years in prison .He was also fined $US3,100 and ordered to forfeit 41 properties (including plots of land) of the 90 in total that he allegedly owns, because they were found to have been purchased with illegal resources.

Since his arrest, Duarte has spent 17 months in custody, and with time served, could be out on parole in three years.

The former governor received a reduced sentence after agreeing to a plea bargain with prosecutors, who were only able to prove that he had misappropriated 1.6 billion pesos from state funds.  Of this amount, 600 million pesos was used to buy 21 plots of land in Campeche, four apartments in Ixtapa and nine properties in Mexico City.

An unpopular governor, Duarte became involved in multiple scandals during his term of office, He was forced to resign two months before his six-year administration was due to end. He fled the country and was eventually captured in Guatemala. His wife, Karime Macías Tubilla, and their children relocated to an upmarket neighborhood in London, England, but Mexican authorities do not appear anxious to extradite Macias.