After three months of his presidency, the honeymoon between Lopez Obrador and the Mexican people is only getting sweeter, pundits say.

This active, communicative leader, who holds massive press conferences daily and whose utterances are rich with “elements of an almost religious culture…pardon and goodness,” according to pollster and El Economista writer Roy Campos, is generating historic approval levels of 70 to 80 percent, even higher than his record 50-percent-plus election victory. 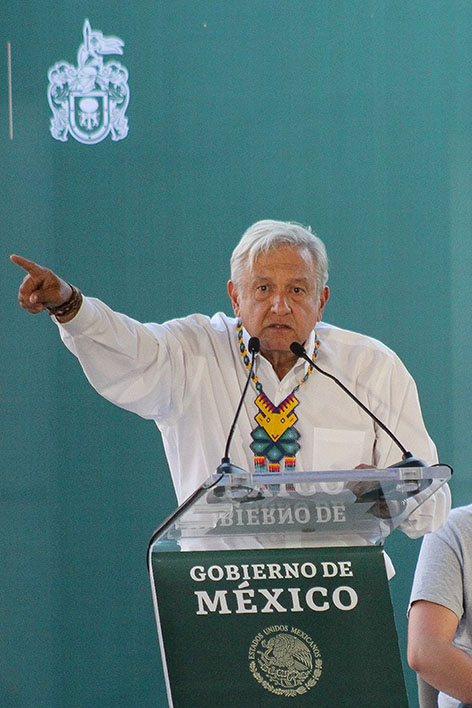 And the goodwill is overflowing both among the humble people Lopez Obrador has steadfastly championed and educated urbanites.

“It doesn’t matter if the murder rate keeps going up,” said Campos, explaining that what pleases people have been AMLO’s symbolic moves—reducing government salaries (including his own), eliminating the monthly 205,122-peso (US$10,600) pension of former presidents, getting rid of the official cars and jets of government officials, and so on.

However, the support for AMLO evidences “an extra phenomenon,” Campos adds, that doesn’t depend as much on facts as on emotion.

Lorena Becerra, pollster for the newspaper Reforma, agrees, explaining that Mexicans had been mired in a long period of disenchantment, feeling that “the security situation was not going to improve, that all politicians are corrupt.”

But “suddenly we begin to see that public opinion…starts to have high expectations,” she said in a Televisa interview. “People have begun to believe in the change that López Obrador offers and to attach this support to everything he says,” even when experts pan his programs, such as the creation of a National Guard or his January fight against gasoline thieves.

Indeed, gas thievery was the frame for some signature moves by the leader who presides over a country with a poverty rate of 42 percent (according to government measures, which are much higher than those of the World Bank).

After the traumatic “oleoducto” (gasoline-pipeline) explosion in Tlahuelilpan, AMLO tread a fine line. While managing to remain firm in his goal of stopping thievery from Pemex, he arrived, somber and dressed in black, at the disaster scene within hours, declaring, “We have the conviction that the people are good, that they are honest. That they arrived at the extremes of these practices [stealing gasoline] because they have been completely abandoned.” Perhaps more remarkably, Lopez Obrador, supported by his party Morena, soon began funneling economic aid to victims of the explosion.

In reaction to these moves, public opinion of the president during the crisis was remarkably buoyant. When there were hours-long lines at filling stations in Guadalajara, a half dozen articulate, young, Uber drivers serenely expressed support for the president, even though his decisions were putting a serious cramp on their ability to earn a living.

“The robbery of gasoline is a difficult problem and what the president is trying to accomplish will take time,” said one, without blinking.

A 30-year-old financial analyst in a multinational, information technology company in Guadalajara had a slightly different take on AMLO’s record so far, with the gasoline crisis figuring prominently in her opinion.

“I didn’t support him at first,” she explained. “In fact I voted against him. But now, since I don’t have any other options, I’m giving him a chance, and I’ve changed my ideas.

“Before January, I didn’t even know that gasoline was being stolen,” she went on. “When the president closed the pipelines, I was against it. He could have chosen a different way that would have caused less chaos. But now, looking at the results, they’ve been good; the price of gasoline has gone down a little.

“Before, with other presidents, all we saw were increases. So with this president, even though some of his ideas are weird, or odd, we end up with benefits. But with previous presidents, even though they had some good ideas, we didn’t get any benefits. So now I know what AMLO can accomplish and I’m expecting only good things.”