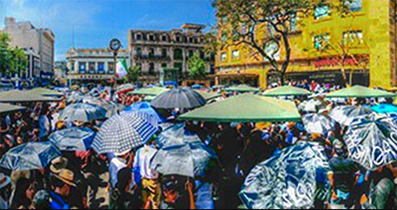 Although he enjoys high popularity ratings, Lopez Obrador has also had to endure plenty of harsh criticism, especially from middle-class constituents, as well as leading opinion makers.

Among the complaints at the recent protests were the president’s cancelation of the Texcoco Mexico City airport project, the ongoing general insecurity situation, and his frequent use of divisive language, in particular branding his adversaries “fifis” (well-to-do elitists).

A small contingent in Guadalajara joined Mexico City, Querétaro, Monterrey, Morelia, Hermosillo, León, Mérida and Puebla in the coordinated protest. Around 1,000 people gathered at Plaza Universidad in Guadalajara on Sunday, May 5 to demand an end to Lopez Obrador’s tenure. (However, he still enjoys an approval rating of around 70 percent.)

Many protestors belonged to the conservative-leaning Xiudadanos MX movement, some of whom carried black umbrellas with politically-charged slogans.

The protestors expressed their dissatisfaction with federal government decisions, especially those involving the Maya Train, one of Lopez Obrador’s pet projects. Others claimed the president’s rhetoric is in violation of their constitutional rights.

“We are going to be analyzing this situation until we get a constitutional order so that he stops calling us fifis,” said Pablo Medina Magallanes, a Xiudadanos MX supporter.

“That’s a clear violation of the second article of the constitution because he is discriminating against us. It’s incredible that the president of the republic is first to provoke a division between Mexicans. We aren’t chairos [anti-government], we aren’t fifis, we are Mexicans.”

The largest protest took place in Mexico City, where more than 15,000 demonstrators marched down the Paseo de la Reforma boulevard. Based on reports, the participants were not affiliated with any political party.

In Querétaro, hundreds joined what was dubbed as the “Silent March.” There, protesters rejected the polemic national “consultations” that Lopez Obrador favors, rather than making important decisions and taking the responsibility for them on his own.

Certain signs read, “Out with AMLO” and “We’re all Mexico,” while protestors sang the Mexican national anthem. Other slogans hung on windows and doors of homes downtown read, “We aren’t elitists” and “No more socialism.”