In an unexpected move – even for Donald Trump – the U.S. president announced Thursday that he will impose a five-percent tariff on all goods entering from Mexico unless it halted the flow of illegal immigrants into the United States. 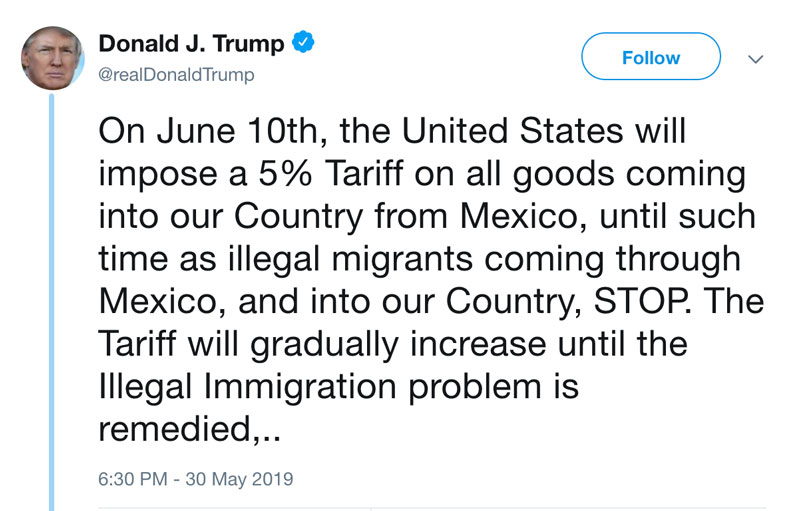 The tariff will take effect on June 10, Trump tweeted, and “will gradually increase until the illegal immigration problem is remedied.”

Trump later said the tariff would increase gradually, to ten percent by July 1, and five percent each month for the following three months, unless the immigration problem is resolved.

In a swift reaction Thursday evening, Jesús Seade, Mexico’s sub-secretary for North America, said this country would “respond energetically” if tariffs were imposed.  He called Trump’s threat an “extremely serious” development that would be an “economic disaster” if actually carried out.

Seade said the announcement was a “bucket of cold water” at the exact time Mexico and the United States were “constructing a good relationship.” Ironically, on Thursday legislatures in the United States, Mexico and Canada all began the task of ratifying the new USMCA (T-MEC) trilateral trade deal that will replace NAFTA.

Commentators on both sides of the border questioned the wisdom of Trump’s tariff threat, suggesting it would inevitably lead to a trade war between Mexico and the United States and almost certainly jeopardize the new trade deal. 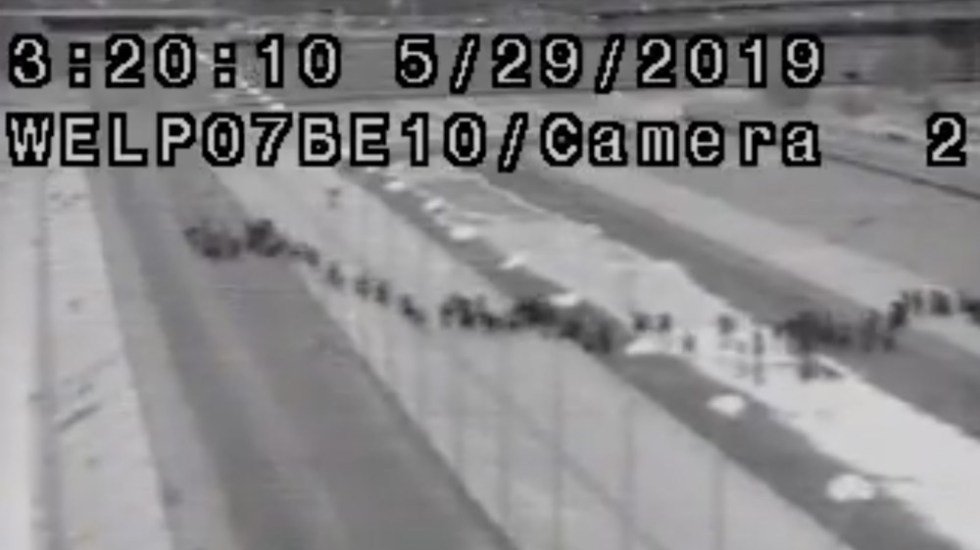 Many commentators also noted that the United States would have as much to lose as Mexico from a trade war.

“Three years of Mexico bashing and Potus still doesn’t get it,” tweeted Arturo Sarakhan, a former Mexican ambassador to the United States. “(We have) integrated supply chains and joint production platforms. That means 40 cents of every dollar of Mexican exports to the U.S. is American content. So five percent tariffs on Mexican exports are also five percent tariffs on U.S. inputs.”

Noted Nick Miroff, a Washington Post reporter covering immigration enforcement and border security: “If you think this will affect avocados and Coronas, think again. Many of the goods that will be taxed are manufactured in Mexico for the U.S. market by American Fortune 500 companies. Think Caterpillar, Ford, Polaris, Dell etc.”

Seade qualified his remarks by saying Trump “sends out many tweets that don’t go anywhere” and that he doubted whether the U.S. president would carry out his threat.

Other commentators wondered whether Trump has the power to slap tariffs on Mexico. Although some White House officials believe he has the authority under conditions of a “national emergency,” the president would likely face a stream of legal obstacles, not least from U.S. businesses affected by the measure.

Trump’s tweet on Thursday came a few hours after he posted a video of border agents apprehending a group of more than 1,000 mostly Central American  immigrants, in one of the largest individual detentions ever recorded. Although Trump has repeatedly criticized Mexico for failing to stop the flow of migrants passing through this country, President Lopez Obrador has actually increased deportations.

Within minutes of Trump’s tweet, the Mexican peso lost 1.7 percent of its value, although it staged a quick recovery.