Ron Napier closed his eyes for the last time on August 12, 2019, at the age of 98, having lived his life in accordance with his philosophy of fully enjoying each day. 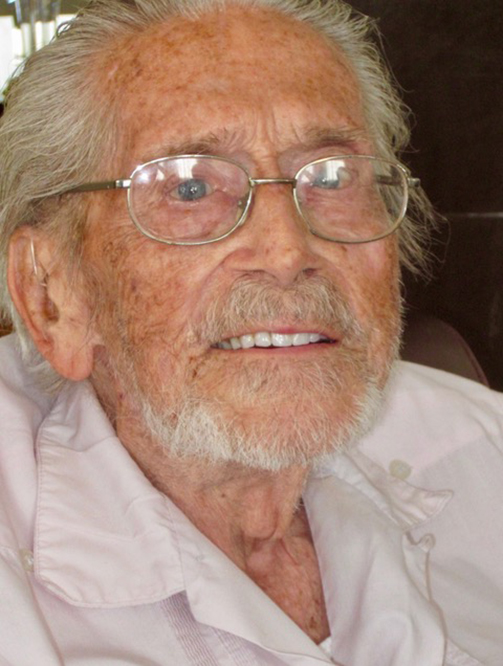 He died with his encyclopedic knowledge of music intact and was responding to emails on the eve of his departure. His body gave out long before the brain was ready or willing. He said he was observing his death like a curious spectator as the process unfolded.

Napier was born in London in 1921, son of Doris Hills and Richard Napier, enlistees in the Royal Air Force (WWI). At 12 years old, he was sent to boarding school at George Watson’s College, Edinburgh, and it was there, while listening to gramophone recordings in his room, that he developed a lifelong passion for music. His formal education ended at age 17, so the erudition for which he was known was almost entirely self-acquired.

In 1938 Napier was conscripted in the RAF and trained in radar, then a new technology. From 1942 to 1946, posted on the west coast of India in a mobile, ground-controlled interception unit, he admits to having experienced boredom for the only time in his life. Contracting malaria was a blessing because he was sent to Darjeeling to recover, he said.

Shortly after returning to London, he married German opera singer Gerda Nielson and together they immigrated to Canada and settled in Toronto. There Napier opened a shop selling gramophones, recordings, sheet music, and musical instruments. He also taught himself to play the recorder and learned all he could about music, especially about Baroque composers, their works, and stylistic expression peculiar to that era.

In 1956 he took a job with BMI Canada, a music publishing and performing rights organization. From 1959 to 1969 he was head of publishing, and thereafter was manager of concert music administration until his retirement in 1984. He loved the work and the perqs that went with it—meeting illustrious musicians who performed in Toronto, including Stokowski, Stravinsky, and Yehudi Menuhin, and having free tickets to their concerts.

Gerda died in 1977 after 30 years of marriage, and not long thereafter Napier married Winnifred McIntosh. They moved to Vancouver where he started the Avalon Press (music publishing), which he sold in 2005 when he and Win moved to Mexico. He brought with him an impressive library of music collected over 50 years in the business. At Lakeside, he kept this rare collection alive, spawning ensembles through the years. Win died in 2017 after forty years of marriage.

Napier’s own words about his life at Lakeside: “Perhaps the most important contributing factor to my longevity is that I’ve led an interesting, satisfying life. I live among interesting people and engage in activities that challenge my intellect. I play my recorders with a Baroque ensemble that rehearses weekly and I find joy in a weekly Scrabble match paired with someone of my own level. I belong to the Freethinkers who get together each month for a lively discussion. For years I have invited music-loving friends to share great music performances on television most Sundays. Engaging with friends in activities that I love goes far in keeping me happy and mentally fit. Continuing to do the things I like to do, I never get bored. Philosophy of life? I’d say, ‘Enjoy myself.’”

When Ron Napier died (he’d never have said “passed on”), some pronounced it the end of an era. Certainly, they did not mean the end of the Baroque Era in Ajijic, over which he presided some 14 years. The Ron Napier Digital Music Library, currently in the works, will make this rare collection accessible to the entire community. Napier is survived by his half-brother Nick Farrelly of Sheffield, England, and his stepchildren Neil Frederick McIntosh of Toronto, Ontario; Cynthia Jane McIntosh of Surrey, British Columbia; and David Brian McIntosh of Penticton, British Columbia. 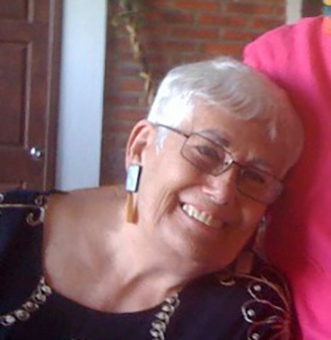 Barbara Mae Horning Madren died after a brief illness on Sunday, August 11, 2019. Barbara was born February 25, 1931, in Woodstock, Ontario, Canada, and graduated from Albert College, Belleville, Ontario. The student yearbook, The Alibi of 1950, proclaimed her nickname to be Pokey (or maybe Pinky).

When she was a child, Madren and her parents traveled to Monterrey, Nuevo Laredo, for her father’s health. He had been gassed in World War II and advised to go to Mexico for his lung condition. Madren and her mother later moved to Monterrey full time, and Madren taught English as a Second Language there for a number of years. This is where she learned Spanish.

During her life, Madren discovered that her birth mother had been a teenager too young to contemplate raising a child and that adoption was the best option for them both. Barbara’s adoptive parents had been unable to have children together, so she was their pride and joy!

As an adult in Windsor, Ontario, Barbara hosted both a radio talk show and a television series concerning women’s issues of the times.

About 1998, she moved to Lakeside and became active in community projects, and volunteered in the library as well as being director of the Information Desk at the Lake Chapala Society. She also held the board position as LCS Secretary for four years. In recognition for her years of dedicated volunteer service at LCS in various capacities, the LCS board of directors awarded her a Lifetime (honorary) membership.

Madren joined the American Legion Auxiliary Unit 7 in Chapala as a social volunteer. In July, 2012, she was awarded a Certificate of Appreciation. She also joined the Canadian Legion and served as Chairman for their Canada Day ceremony and was Co-Chairman for three annual Canadian Thanksgivings. She was a regular for breakfast at the American Legion and was renowned for her sales of event tickets, 50/50 lottery and wheel of fortune chances.

Madren always had at least one white cat and loved all her cats and also her friends’ dogs. She was always generous with doggie treats and, when she was driving, carried a bag of treats and stopped multiple times to share them with street dogs.

She survived breast cancer a couple of years ago and was grateful for the good wishes and support of her friends.

She was well known for her wry humor. On her hospital bed, she told one of her last visitors, “You’re a nice person (drum roll), despite what everyone says about you.”

A celebration of her life will be held at the American Legion, Morelos 114, Chapala at 2 p.m., Friday, August 30.