Last summer, back in Canada, I began the process of applying for my Residente Temporal status to live in Mexico on a more permanent basis. 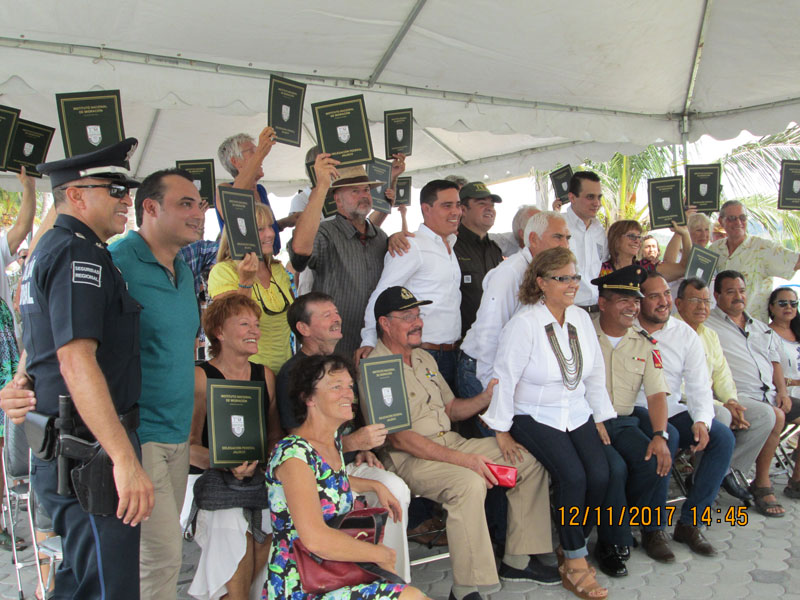 My first step was to take a completed application, along with my passport and proof of pension income to the nearest Mexican Consulate.  I am fortunate to live in a town that happens to have one, a mere five-minute drive from my house.  I am also extremely fortunate that my neighbour, Jaime Muñoz happens to work there.  (A little side note here, a cherry pie goes a long way in building good relationships.)

Two weeks later, I had the preliminary identification card attached in my passport.  Muñoz explained to me that I had 30 days from the date I entered Mexico to go to the immigration office and complete the process of registration and legalization, after which I would receive my card.  Finding Immigration in Melaque proved to a bit of a challenge as construction on a new town hall and police station forced the office to another location – twice.

Having lived in Mexico for a few years, I was neither surprised nor worried that I wouldn’t find it, ask enough people and some kind soul will usually walk you right to the front door.  Again paperwork was completed, fees were paid, and I was told that I would receive an e-mail when it was time to return to be fingerprinted.  It took about three weeks to get the notification, and it came by a phone call from the office at 7 p.m. on a Thursday.  I was instructed to be at the office at 8:15 a.m. the next morning.  After all was said and done, the agent told me that I needed to be on the Malecon in Barra de Navidad at noon on Monday for a ceremonial presentation to receive my status card. This was the first time that the cards had ever been presented in this manner.

Monday arrived, and so did I, along with approximately 50 other expats.  It was a veritable melting pot of English and French Canadians, and Americans, from Barra, Melaque and La Manzanilla.  Some were receiving their Residente Temporal visas, while others their Residente Permanente.  The mood was cheerful and conversations in three different languages were ongoing as we sat under the shade of the canopy and waited for the ceremony to begin.

First to arrive was a military drum and bugle corps, followed closely followed by a squad of soldiers briskly marching – snapping to attention en guard as the representatives of the three government levels proceeded to take their seats at the head table.

We were then asked by the master of ceremonies to go to a table that had been set up behind the seating area and as our names were called, sign a document stating that we had received our cards. A little cart before the horse perhaps, but it proved to be more efficient and quickened the process.

Once back in our seats, the Mexican flag was unfurled by Fernando Martinez Guerrera, the mayor of Chiuhatlan, while the bugle corps played the national anthem.  The MC began with a short speech of welcome and to thank us for our participation and patience.  He then proceeded to introduce the dignitaries seated in front.  Along with Guerrera, there were three officials from the office of Immigration – Ricardo Lira Ariel, the Jalisco delegate of the National Institute of Immigration; Adrian Davila Torres, the officer in charge, lawyer and co-ordinator of Immigration Services; and Citali Rodriguez Serrano, the federal Immigration agent, along with two others who operate the Melaque office. Also seated at the table were the Harbour Master of Barra de Navidad and the captain of the federal police from Melaque.

Several speeches of warm welcomes and appreciation were made, but it was a comment in Serrano’s speech that reached out and touched me deeply. He thanked all of us for “having the confidence and trust in Mexico” to want to make it our home.  We were called one by one to receive the folder which included a letter of welcome along with our status cards.  As each member warmly and vigorously shook our hands, the words of welcome and smiles were genuine.

The affair ended with the playing of Mexico’s national anthem once more and I for one felt very proud to stand at attention as the flag was gently lowered.

While that ended the “official” part of the afternoon, the delegation had one more surprise for us.  We were treated to snacks of calamari cerviche, tostadas, salsa and some wonderfully cold refreshing beverages.  It was a most delightful experience.