Manzanillo, the coastal town in Colima popular with vacationers, played host Tuesday to a delegation of U.S. hurricane experts, there to help increase awareness of the dangers – and improve safety measures and protocols – related to the severe storms that regularly batter the Mexican coast during the fall. 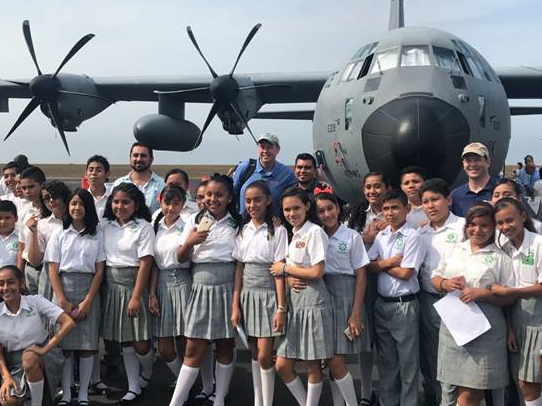 Close to 1,200 people attended a presentation in which experts, including the director of the U.S. National Hurricane Center, Ken Graham, explained the science behind hurricanes and what can be done to prevent damage to life, limb and property.

The team arrived at Manzanillo’s tiny airport in a WC-13OJ “Hurricane Hunter” airplane, a high tech aeronautical instrument used to collect a variety of data on hurricanes and cyclones.

The visit comes after the Caribbean was battered last year by two of the most powerful hurricanes ever recorded, Irma and Maria.  Much of Puerto Rico remains utility poor to this day, despite it being – at least nominally – a part of the United States.   Pacific Coast hurricanes are usually less devastating, although much loss of life has been recorded over the years.

Graham warned those gathered that, although places hit by last year’s hurricanes are still recuperating, measures must be taken against the hurricanes to come, since the season is only weeks away.

Graham and his team’s previous stop was in La Paz, Baja California on Monday, April 23.  As of publication, they will have also paid visits to Panama City, Thursday, April 26, and Montego Bay, Jamaica, Friday, April 27.  Fittingly, the tour ends on Saturday, April 28 in Ceiba, Puerto Rico.