Three crocodiles have been killed by vigilantes in recent weeks in Puerto Vallarta – one of them in a fashion taken right out of the playbook of the drug cartels. 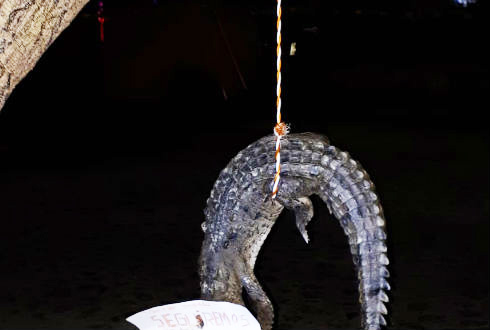 The latest slaughter occurred Tuesday in the Senderos de Luna neighborhood, when a dead 1.5-meter-long crocodile was discovered hanging by a rope on a tree to which a “warning” note had been attached – in the style of narco killings. The note read: “Seguiremos matando estos asquerosos animales si no ponen control ecología y gobierno de Puerto Vallarta” (We will carry on killing these disgusting animals if the Puerto Vallarta government and ecology department don’t control them.)

Two other crocodiles have met with similar fates, one on September 19 and another at the end of August.  The latter croc had been decapitated.

According to Paragraph 3 of Article 420 of Jalisco’s penal code, the illegal hunting or killing a protected species can result in prison terms from one to nine years.