Mexican marines were pelted with rocks and had their vehicles vandalized by a group of demonstrators angry at the disappearance of two young men in the southern Jalisco city of Ciudad Guzman. 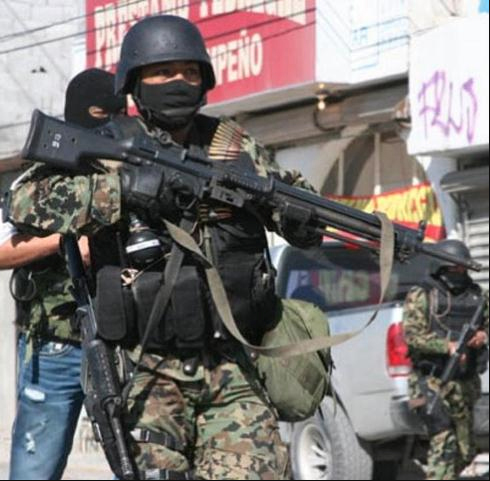 The demonstrators, who included family members of the missing men, believe the Mexican Navy is responsible for the disappearances.

Marines have been deployed in the region since 2017 as the federal and state governments try to combat the influence of the Cartel Nuevo Generation Jalisco (CNGJ) and track down its leaders.

Organized though social media, Monday’s protest march attracted around 200 participants and was making its way peacefully to Ciudad Guzman city hall when it encountered a group of marines.

According to witnesses, at first only verbal abuse was directed at the officers but the situation worsened after bottles and rocks were thrown.

Video taken at the scene showed one participant attacking and kicking a marine.

The violence abated after marines apparently fired several shots into the air, making the protestors run for cover and effectively ending the demonstration.

The windscreens of several Navy vehicles were shattered, while the initials of the CJNG were painted on the side of one pickup.  Several hooded men allegedly participated in the protest.

According to some reports, three civilians received bullet wounds during the fracas, although this has not been confirmed.

The CNDH praised the marines for their mostly passive response to Monday’s violent attack, while Casillas said Mexico’s institutions should not be subject to such aggression, which he called “unacceptable.”

Mexican marines have been the focus of two previous demonstrations in southern Jalisco towns this year.  One was held in Tuxpan in January and two more in Mazamitla in February.

The United Nations recently issued a report suggesting there are “strong indications” that security forces are responsible for the disappearance of 21 men and two women in the last four months in Nuevo Laredo on Mexico’s northern border. The Mexican Navy is the primary security presence in the city and has been involved in several clashes with gunmen during this period.  In one shootout, a car carrying a family of five was fired upon, killing the mother and two daughters. An independent inquiry found that a Navy helicopter accidentally fired on the car.

The disappearances started soon after this incident, civic activists say.