The Chapala government believes the municipality stands to reap huge economic, social and environmental benefits from its recycling program that is being introduced in gradual stages. 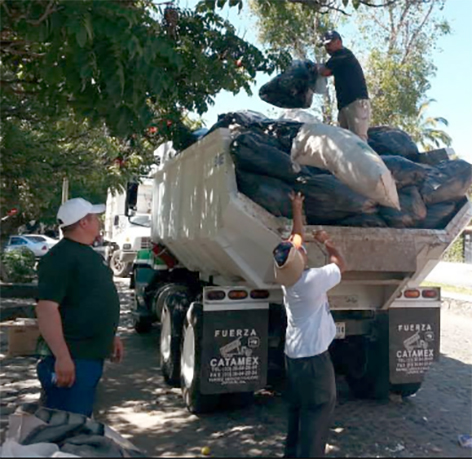 Income from the sale of material suitable for recycling – added to savings from reduced collection and solid waste disposal – could total a whopping 28 million pesos per annum, according to estimated figures cited by Chapala Mayor Moisés Anaya and Ecology Director José Jaime at a November 13 press conference.

But the potential financial boost cannot be achieved without the cooperation of citizens, the officials stressed.

Ajijic has been targeted as the test ground for the new waste management model. The trial run of selective collection of recyclable plastic and metal refuse started in the village on the first of this month, and is being fine tuned for greater efficiency.

Effective as of Monday, November 19, Aseo Público (the municipal sanitation department) will take charge of picking up reusable materials within the village proper on a daily basis, traveling normal routes in advance of the timetable followed by GIRRSA, the private company on contract for trash collection services.

Residents are asked to separate plastic and metal from mixed garbage inside their home and set it out at curbside in trash cans or other containers that make it clearly discernible to Aseo Público employees. Other types of refuse may be combined in garbage bags for pick-up by GIRRSA.

Jaime announced that depositing any type of trash at nearby corners is henceforth prohibited, although fines will be deferred while inhabitants adjust to the new system.

The selective pick-up service does not yet apply to homes located in subdivisions or gated communities on the western outskirts of town. Householders in those areas are encouraged to separate recyclables and deliver them to the Centro de Acopio warehouse on the north side of the highway at El Bajio.

The next phase of the Ajijic pilot program will see the collection of organic garden and household wastes for processing compost.

Jaime’s number crunching indicates that Ajijic alone generates 16 tons of solid wastes every day. Separation will allow the government to substantially reduce its expenses to both GIRRSA and the landfill facility in Ixtlahuacán de los Membrillos.

Proceeds from recycling will be set aside to fund community projects to be determined by a citizens’ committee currently being assembed. In other words, profits generated by the people of Ajijic will be spent to benefit the townspeople rather than going into municipal coffers. Jaime estimates that the town can produce a kitty of more than 500,000 pesos each month once recycling includes glass, cardboard, paper and green wastes.

The same management model will apply as the cash-for-trash separation and recycling programs are introduced in other villages and neighborhoods of the municipal seat.

Overall, Anaya and Jaime have set their sights on an ambitious project that will take time to run on full throttle. Although its success hinges on strong leadership along with committed citizen participation, it is the most well founded approach to recycling yet considered by Chapala authorities.